With so many groups of wechat and QQ, how should we manage the friend relationship?

In real life, the existence of intermediaries is indispensable. Without intermediaries, we can't communicate with distant friends. Each colleague object will reference each other. If each object interacts with multiple objects, a network structure will be formed as shown in the following figure. 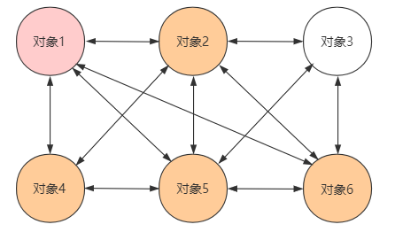 As can be seen from the above figure, each object is over coupled, which is not conducive to information reuse or expansion. If the mediator pattern is introduced, the relationship between objects will become a star structure, as shown in the following figure. 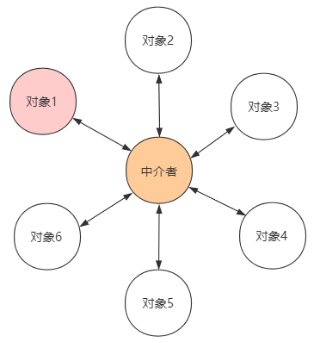 The mediator pattern is used to reduce the communication complexity between multiple objects and classes. By providing a mediation class, this model changes the many to many relationship between objects at all levels of the system into one to many relationship. The mediator object can change the complex network structure into a star structure centered on the mediator, so as to reduce the complexity of the system and improve the scalability.
If there are a large number of association relationships between the objects at all levels of the system, that is, the hierarchical objects are in a complex network structure. If they are tightly coupled directly, the system structure will become extremely complex. When one of the hierarchical objects changes, the corresponding hierarchical objects tightly coupled with it also need to be modified, which is difficult for the system to maintain.
In short, if multiple classes are coupled to form a network structure, consider using the mediator pattern for optimization. To sum up, the mediator model is mainly applicable to the following application scenarios.

(1) There are complex reference relationships between objects in the system, and the resulting interdependence structure is chaotic and difficult to understand.

(2) Interactive public behavior. If you need to change the behavior, you can add a new mediator class.

The UML class diagram of the mediator pattern is shown in the following figure. 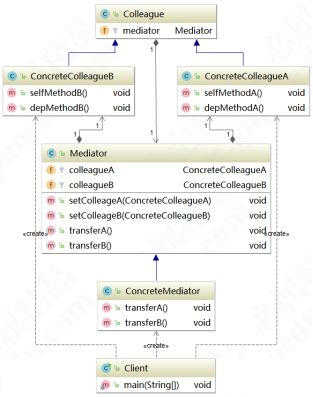 Then create the ChatRoom class.

The operation results are shown in the figure below.

First, let's look at the Timer class in the JDK. After opening the Timer structure, we find that there are many schedule() overloaded methods in the Timer class, as shown in the following figure. 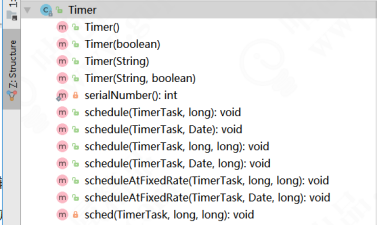 Click any one of the methods, and we find that all the methods finally call the private schedule() method. The source code is as follows.

Moreover, no matter what kind of tasks are added to a queue and executed in order. We call all objects in this queue "colleagues". The communication between colleagues is coordinated through Timer, which plays the role of mediator.
Focus on WeChat's official account of Tom architecture and reply to the "design pattern" to get the complete source code.

[recommendation] Tom bomb architecture: 30 real cases of design patterns (with source code attached). Challenging the annual salary of 60W is not a dream

This article is the original of "Tom bomb architecture". Please indicate the source for reprint. Technology lies in sharing, I share my happiness!
If this article is helpful to you, you are welcome to pay attention and praise; If you have any suggestions, you can also leave comments or private letters. Your support is the driving force for me to adhere to my creation. Focus on WeChat official account Tom structure, get more dry cargo!