The following is the explanation of the pointer from the definition, focusing on practice, with exquisite bushi small pictures. If you also find the pointer difficult, learn it with SThree~~

My skills are not high, so the explanation is very easy to understand~~

If you have any doubts or I am wrong, you are welcome to point out!!!

1, Definition and use of pointers

* Indicates that a pointer variable is followed, point_ A is the name of the pointer variable. This sentence means point_ The address where the a variable is stored in a, i.e. point_ A points to a    (it's a's room number, hee hee) we can take the room number (point_a) and find the person in the corresponding room (* point_a=a) through the key (*)

In the next exercise, let's feel the replacement of people in the room by keys.

Since we can exchange people through the key, let's try whether we can exchange the key for people in two rooms. (there's another explanation later, don't forget to have a look ~ ~)

It can be seen that although the a and b values we set have not changed, the pointer to them has changed. (again, for example, I really like the chestnuts in this hotel)

In other words, people who exchange their keys and then open the door of the room through the key are different hhh (in this, we introduce the intermediate key as we used to exchange values, and leave a fake key to prevent being found)

2, Pointer as parameter of function:

In the past, it was difficult for us to get two return values by calling a function (it seems impossible?), but with a pointer, we can do whatever we want.

Then, if you want to get n values to be changed through function call, the method is as follows:

Let's write a swap function to exchange two numbers. The same explanation will be later

In this problem, we change the content of the address through the formal parameter pointer variable.

Remember when we introduced a fake key in the last question, and we introduced a dummy in this question (a little afraid), because we can exchange keys in the same function, but the transfer between functions is value transfer. If we only exchange in the called function, it will not affect the main function.

However, we can know the address of the variable to be changed through the transfer of pointer variables, so exchanging the contents pointed by the pointer is equivalent to writing an article on the required variables.

The picture of this problem looks good. Ben baa is very satisfied~ 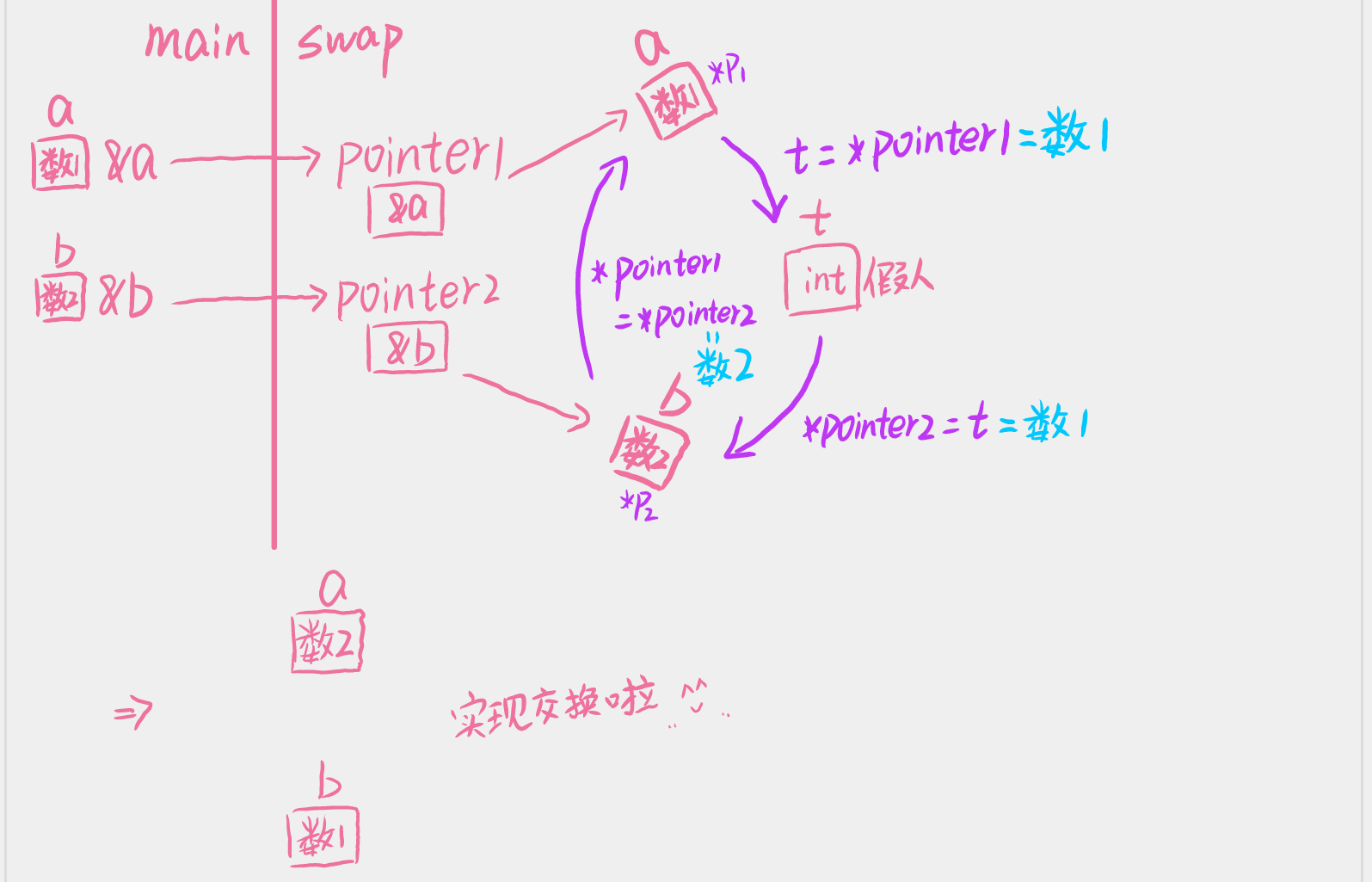 The work of exchanging two numbers is over. We boldly take the next step. Can we create a function to obtain the maximum and minimum values of the array at the same time~   With a pointer, it's not difficult.

//The following code also writes many other functions. uu people can only focus on the main function and FindMM function;

//And the interface of this program is fried chicken friendly~ 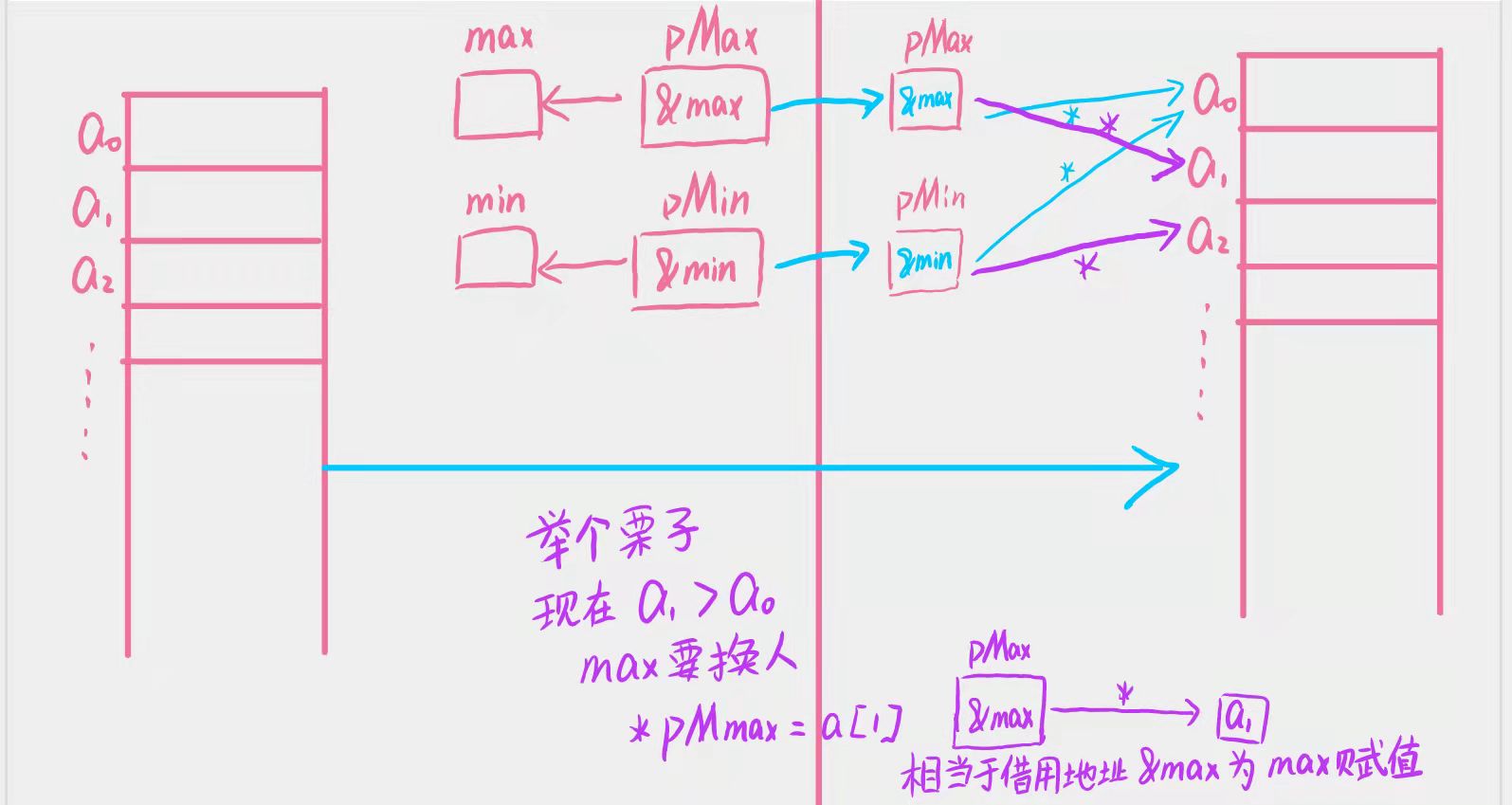 In fact, I think there are still many difficult points to understand about the problem of arrays, but the truth remains the same. Let's (● '◡ ●) talk about it in detail.

First, get the array (here I call many small functions, you can ignore this step and initialize the array directly). Then I set the variables max and min, and set pMax and pMin to point to them, which are passed to the formal parameters as parameters.

Then we know the addresses of max and min in the FindMM function. At this time, we assign the first element of the array to them (otherwise they may be little garbage).

then, compare, as usual, but because we use the addresses of max and min, we can change the variable value of the main function in the called function.

Next, let's take a look at pointers, arrays and functions. The application will be closer~~