How to deal with sudden traffic peak gracefully in microservice governance

Why do I need to reduce the load

In micro service clusters, the call link is perplexing. As a service provider, there is a mechanism to protect itself, which prevents the caller from calling himself down without any brain calls and ensuring the high availability of his services.

So is there a more concise current limiting mechanism that can achieve maximum self-protection?

What is adaptive load shedding

So the key is how to measure the load of the service itself?

When the above two points are met at the same time, it indicates that the service is in a high load state, and adaptive load shedding is carried out.

At the same time, it should also be noted that in high concurrency scenarios, the cpu load and concurrency number often fluctuate greatly. From the data, we call this phenomenon burr. Burr may cause the system to perform automatic load shedding frequently, so we generally obtain the average value of the index for a period of time to make the index smoother. In the implementation, it can accurately record the indicators in a period of time, and then directly calculate the average value, but it needs to occupy some system resources.

There is an algorithm in Statistics: exponential moving average, which can be used to estimate the local mean of variables, so that the update of variables is related to the historical value of a period of history. The average estimation can be realized without recording all historical local variables, which saves valuable server resources.

Principle of moving average algorithm It is very clear to refer to this article.

Next, let's look at the code implementation of go zero adaptive load shedding. 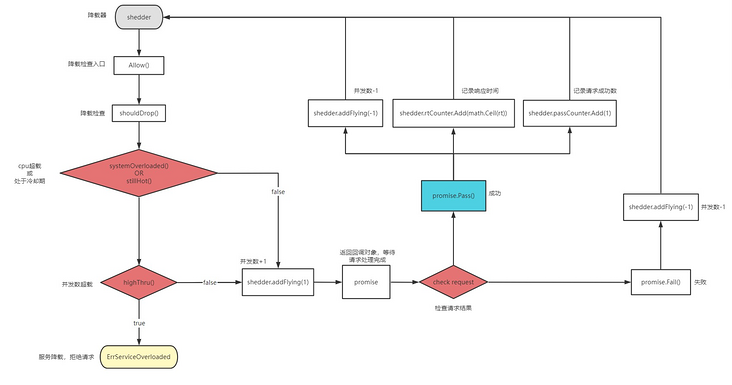 The interface definition is very concise, which means that it is actually very simple to use. It exposes an 'Allow()(Promise,error).

In the business, you only need to call this method to judge whether the load is reduced. If it is reduced, the process will be ended directly. Otherwise, the return value Promise can be used to callback the result according to the execution result.

Check whether the current request should be discarded. The discarded service side needs to directly interrupt the request protection service, which also means that the load shedding takes effect and enters the cooling period. If it is released, return promise and wait for the business side to execute the callback function to perform indicator statistics.

Check if shouldDrop() should be discarded:

The cpu load calculation algorithm adopts the moving average algorithm to prevent burr. Sample every 250ms β It is 0.95, which is roughly equivalent to the average value of 20 cpu loads in history, and the time period is about 5s.

Check whether it is in cooling period stillHot:

Judge whether the current system is in the cooling period. If it is in the cooling period, continue to try to check whether to discard the request. The main purpose is to prevent the system from shaking back and forth due to increasing pressure immediately before the load is reduced during overload recovery. At this time, you should try to continue to discard the request.

Once the number of concurrent transactions currently processed > the upper limit of concurrent load, it will enter the load reduction state.

Why lock here? Because adaptive load shedding is used globally, in order to ensure the correctness of the average value of concurrency.

Why add a spin lock here? Because during concurrent processing, other goroutine execution tasks can not be blocked, and lock free concurrency is adopted to improve performance.

The number of requests and response time are realized by sliding window. For the implementation of sliding window, please refer to the article of adaptive fuse.

Welcome to go zero and star support us!

Focus on the "micro service practice" official account and click on the exchange group to get the community community's two-dimensional code.