The UML class diagram of the command pattern is shown in the following figure. 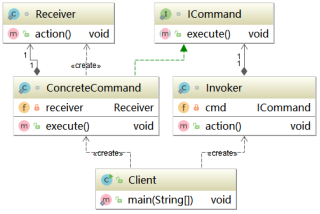 Then create instructions that can be received by the operation player respectively. The code of PlayAction class of playing instructions is as follows.

The code of pause instruction PauseAction class is as follows.

The code of the SpeedAction class of the drag progress bar instruction is as follows.

The code of StopAction class of stop playing instruction is as follows.

From the above code, the control bar can execute a single command or multiple commands in batch. Let's look at the client test code.

Since the control bar has been decoupled from the player kernel, if you want to expand new commands in the future, you only need to add commands, and the structure of the control bar does not need to be changed.

In fact, after calling the thread's start() method, you are qualified to grab CPU resources without writing logic to obtain CPU resources. After the thread grabs the CPU resources, it will execute the contents of the run() method, and use the Runnable interface to decouple the user request from the CPU execution.

Let's take a look at the junit.framework.Test interface that we are very familiar with.

There are two methods in the Test interface. The first is the countTestCases() method, which is used to count the total number of Test cases to be executed. The second is the run() method, which is used to execute specific Test logic, and its parameter TestResult is used to return Test results. In fact, when we write Test cases at ordinary times, we only need to implement the Test interface, which is considered as a Test case, and it will be automatically recognized during execution. The usual approach is to inherit the TestCase class. You might as well take a look at the source code of TestCase.

This article is the original of "Tom bomb architecture". Please indicate the source for reprint. Technology lies in sharing, I share my happiness!