In the past two years, Flutter technology has been used more or less in both innovative applications and old flagship applications. However, the most common problem reported by the Flutter business team is that the memory consumption of Flutter is too high.

The reasons for the high memory usage of the Flutter are complex, so it needs to open another topic to make it clear. Briefly summarize the conclusion of our research: the combination of Dart Heap memory management and the design of fluent widget leads to high business memory, and its core problem engine design makes it easy for developers to step on memory leakage. During development, memory leaks are common and difficult to locate. Two main reasons are summarized:

Developers enjoy the convenience of Flutter development, but unknowingly bear the bitter fruit of memory leakage. Therefore, we urgently need a set of efficient memory leak detection tools to get rid of this dilemma.

In short, we feel that schemes 1 and 2 are not logically complete, and the efficiency of schemes 3 and 4 needs to be improved.

Referring to Android, LeakCanary can accurately and efficiently detect Activity memory leakage and solve the main problem of memory leakage. Can we also implement such a tool in fluent? This should be a better plan.

Before answering this question, first think about why LeakCanary selects Activity as the object of memory leak monitoring, and can solve the main memory leak problem?

We conclude that it meets at least the following three conditions:

Following this idea, if we can find objects that meet the above three conditions in Flutter and monitor them, we can make a set of Flutter LeakCanary tools to solve the main problem of memory leakage in Flutter.

Review the recently solved memory leakage problem from the actual project. The memory surge is reflected in the image and picture objects, as shown in the figure below.

Although image and picture occupy high memory and are the main contributors to memory leakage, they can not be used as the targets of our monitoring because they obviously do not meet the three conditions listed above:

Through in-depth analysis of fluent rendering, it is concluded that the root cause of image and picture leakage is BuildContext leakage. BuildContext just meets the three conditions listed above (detailed later). It seems to be the object we are looking for. It seems good to implement a set of scheme to monitor BuildContex leakage.

Please remember these three conditions, which we will often use later.

What is the memory referenced by BuildContext?

A Widget Tree represents a referenced Widget, such as a RawImage Widget that references an Image. RenderObject Tree will generate a Layer Tree and will strongly reference ui.EngineLayer (c + + allocated memory), so the rendering memory related to Layer will be held by this tree. Based on the above, BuildContext refers to three trees in fluent. Therefore:

How to monitor BuildContext

Can the leakage of BuildContext be fully defined?

From the life cycle of Element: 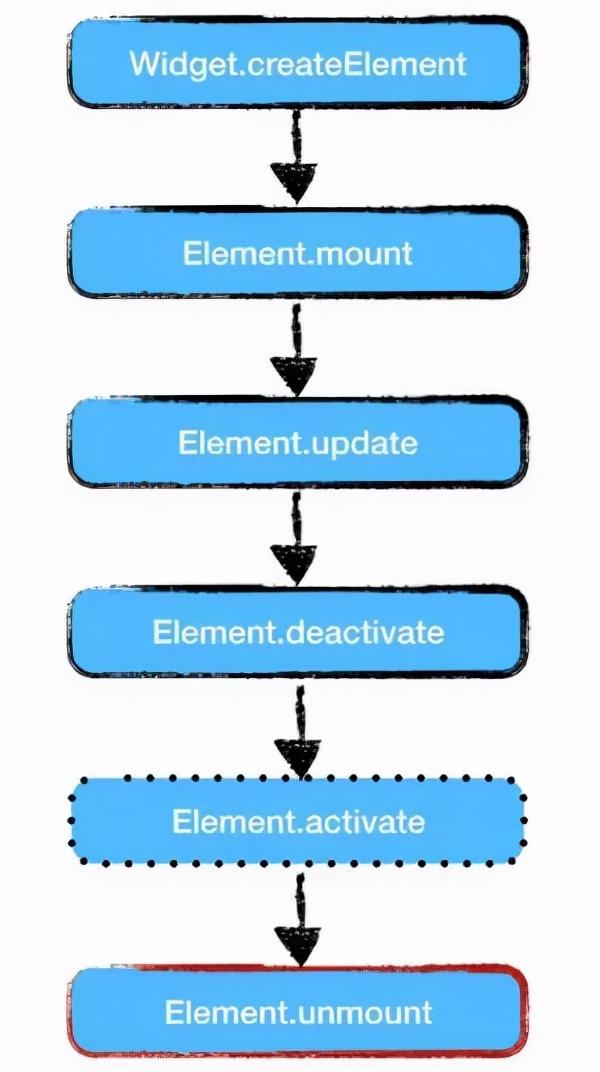 The key point is to determine when the Element will be discarded by the Element Tree and will not be used again. It will be recycled with the subsequent GC.

The finalizeTree processing code is as follows:

finalize phase_ Inactive elements stores elements that are discarded by the Element Tree and will not be used again; After the unmount method is executed, it waits to be recycled by the GC.

Therefore, Element leakage can be defined as: after umount is executed, and references to these elements still exist after GC, it indicates that Element has memory leakage. Meet condition 2.

We have two requirements for the memory leak tool:

From the above description, BuildContext is undoubtedly the object most likely to cause large memory leakage and the best object as a monitoring object. In order to improve accuracy, we also monitor the most commonly used State objects.

What memory will be leaked by the State Association?

Therefore, our scheme monitors the BuildContext associated with large memory and the State of common business operations to improve the accuracy of the whole scheme.

How to realize automatic and efficient memory leak detection?

First of all, how do we know whether an object leaks? Taking BuildContext as an example, we adopt a method similar to "Java object weak reference" to determine object leakage:

Although Dart does not directly provide the "weak reference" detection capability, our Hummer engine has fully implemented the "weak reference leak detection" function from the bottom. Here is a brief introduction to its interface for determining leaks:

Therefore, to realize automatic detection, we only need to specify the time when leakAdd(), leakCheck(), is called.

The timing of BuildContext is in the unmount process of finalizeTree:

The State timing is in the unmount process of the corresponding StatefulElement:

leakCheck is essentially a time point to detect whether there is a leak. We think Page exit is an appropriate time to detect memory leak in business pages. The example code is as follows:

Simulate the statelesswidget in the Demo. The statefulwidget is held by BuildContext, resulting in a leak. The reason for the leak is that it is held statically and the Timer is held abnormally. 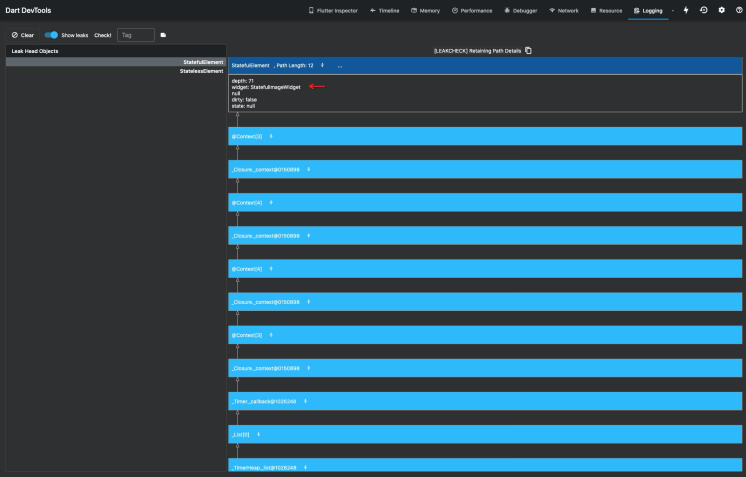 StatelessElement leak detection shows that the StatelessImageWidget is statically held, resulting in a leak. 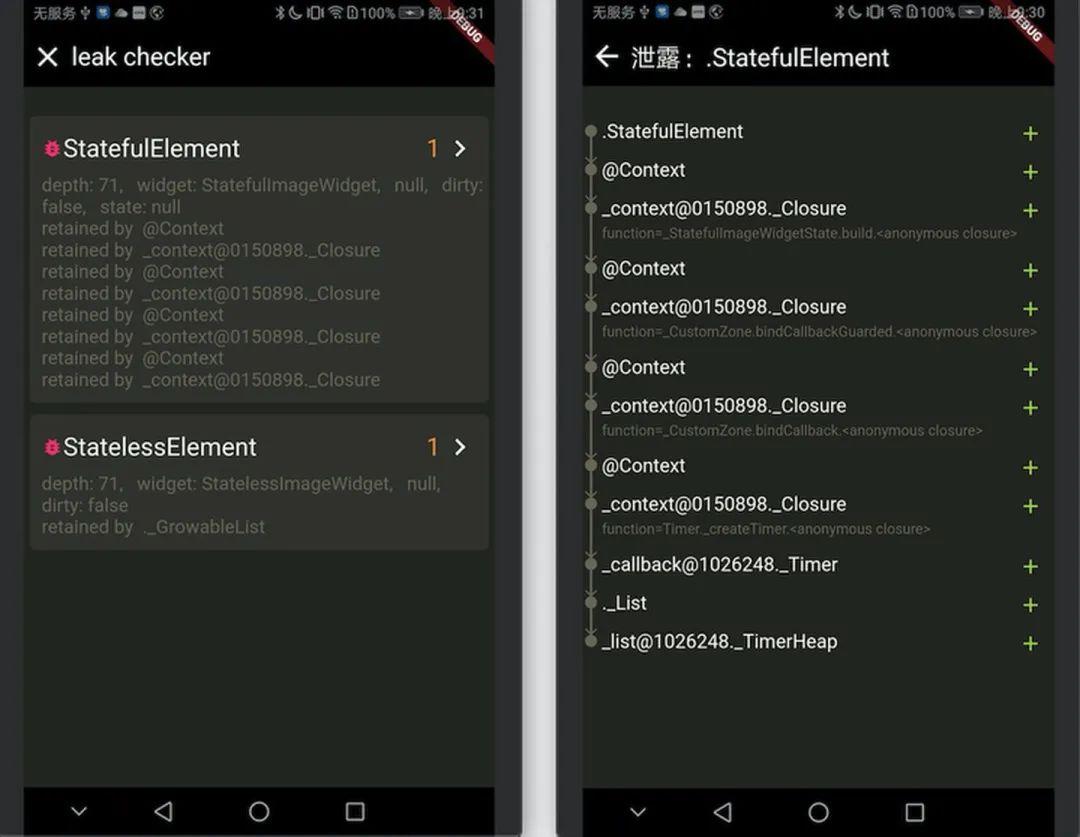 According to the leakage chain given by the tool, the leakage source can be found quickly.

A content-based service of UC is characterized by multiple graphic and video contents, and the memory consumption is quite large. Previously, we solved some state and buildcontext leakage problems (time-consuming and painful) based on the native observer tool of fluent. In order to verify the practical value of the tool, we restore the memory leak problem to verify. The results show that the problems that have been painstakingly investigated before can be detected in an instant, and the efficiency is greatly improved. Compared with the investigation tool, it is just a cloud and mud. Based on the new tools, we have found many memory leaks that have not been checked out before.

In this example, the leaked statefulelement corresponds to a heavyweight page. The Element Tree is very deep, and the memory associated with the leak is considerable. After we solved this problem, the business crash rate caused by OOM decreased significantly. 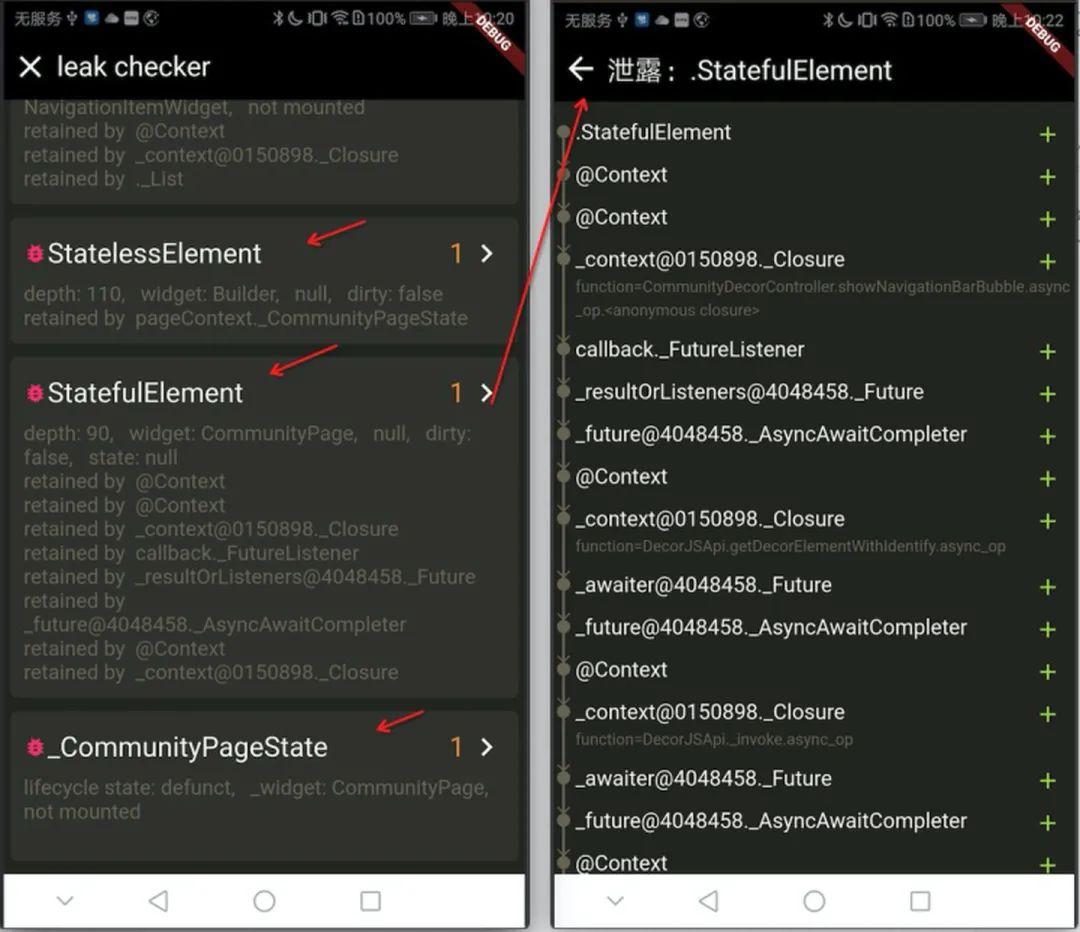 According to the feedback of our classmates who developed another pure fluent app, they know that the memory will increase in some scenarios and there are leaks, but there is no effective means to detect and solve them. Access our tool for detection, and the results detect the memory leakage problem in many different scenarios.

Business students recognize this very much, which also gives us great encouragement to do this set of tools, because it can quickly solve practical problems and enable business. 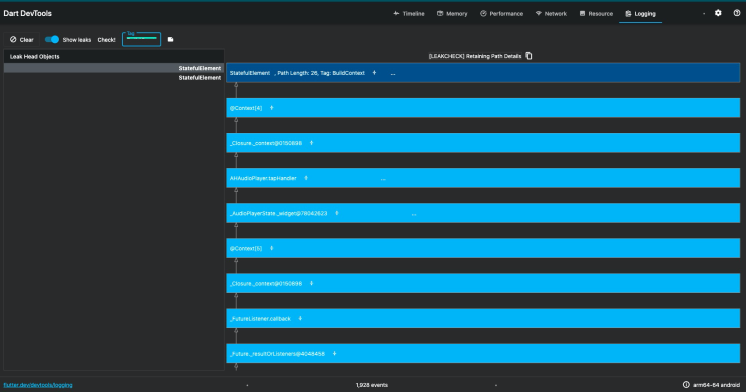 Based on the reality of Flutter memory leak, this paper summarizes that the main memory consumption is image and layer, and the necessity of exploring a set of efficient memory leak detection scheme. By using Android leak Canary for reference, we summarize three conditions for finding leak monitoring objects; Through the analysis of three trees rendered by fluent, BuildContext is determined as the monitoring object. In order to improve the accuracy of detection tools, we add State monitoring and analyze the necessity. Finally, a scheme of efficient memory leak detection tool is explored, and its advantages are as follows:

This scheme can cover all the memory leakage problems we currently encounter, greatly improve the memory leakage detection efficiency and escort the Flutter of our business. At present, the implementation of the scheme is based on Hummer engine and runs in debug and profile mode. In the future, online release mode detection will be explored to cover scenes that cannot be reproduced locally.

We have plans to provide access methods for non Hummer engines to feed the community. Please look forward to it.