Limited cognition, I hope you will forgive me. If you have any problems, I hope to communicate with you and grow together!

This paper first makes a brief introduction to the gazebo three-dimensional physical simulation environment, and the specific content will be later. For other modules, please refer to my other articles

Tip: the following is the main content of this article

Gazebo is a three-dimensional physical simulation platform, which emphasizes the creation of a virtual simulation environment. Gazebo is not a display tool, but emphasizes simulation. It does not need data, but creates data. Gazebo itself is a robot simulation software. Based on ODE, it can simulate many physical characteristics of the robot and the environment%2c, not only the motion function of the robot, but also the sensor data of the robot. These data can be displayed in rviz, so when using gazebo, it will often be used with rviz. In addition, [anti theft mark – hzj] rviz can also establish a simple simulation environment together with other function packages, such as rviz+ArbotiX. Please refer to ROS by Example
For the tutorial, see: http://www.ros.org/wiki/simulator_gazebo/Tutorials

3. Display the backtracking test under the scenario
.
.

Terminal tools: users can use the command line tools provided by gazebo to realize simulation control at the terminal.

Like rviz, if you have installed the full version of ROS on the desktop, you can skip this step directly. Otherwise, please use the following command to install:

After installation, use the following command in the terminal to start ROS and gazebo [anti theft mark – box hzj]
$ roscore

2: Model List
WORLD: displays the model currently in the scene, and allows you to view and modify the model parameters [anti theft mark – hzj]

INSERT: used to add new objects (models) to the simulation. To view a list of models, you may need to click the arrow to expand the folder. Click (and release) on the model you want to INSERT, and then click again in the scene to add the model

LAYERS: organize and display the different visualization groups (if any) available in the simulation

The elements of gazebo simulation are built with corresponding msgs and corresponding api functions. You can build them yourself by learning these

1. Server and client of gazebo

(the underlying engine of gazebo)
Server gzserver: a server used to simulate physics, rendering, and sensors
Client gzclient: a client that provides a graphical interface to visualize the simulation and interact with the simulation [anti theft mark – hzj]

The client and server communicate using the gazebo communication library

(all about environment configuration are here, including static objects, lights, etc.)
[this is usually built by yourself – in the form of. world model file]

1. Method 1: directly use the model included in gazebo's GUI / download gazebo's model database, and then save it as a. world file

You can also modify parameters later

2. Method 2: use Building Editor to draw models (mainly walls and houses), and then save them as. world files

Select Edit –; Building Editor in the gazebo menu bar to open the Building Editor interface. Select the drawing option on the left, and then use the mouse to draw in the upper window. The drawn simulation environment can be displayed in real time in the lower window. [anti theft mark – hzj]

Refer to the official tutorial
http://gazebosim.org/tutorials?cat=build_world&tut=building_editor

3. Method 3: search the open source environment model on github and use it directly [it's better to build it yourself]

Check the tutorials provided on the official website of gazebo, and generally use the world plug-in method to import

(4) How to modify the built. world file

Go to the purpose of placing the. World file, run the command $gazebo XXX.world, overwrite and save it after modification [anti theft mark - box type hzj]
.
.

(1) The simulation environment should be kept as simple as possible, otherwise it is difficult to solve problems

(4) Finally, save the model through the GUI

Refer to the official tutorial
http://gazebosim.org/tutorials?cat=guided_b&tut=guided_b3

1) Method 1: it is realized by simple URDF/xacro file programming

Method 1: search in Google's 3D Warehouse
The link is: https://3dwarehouse.sketchup.com/ 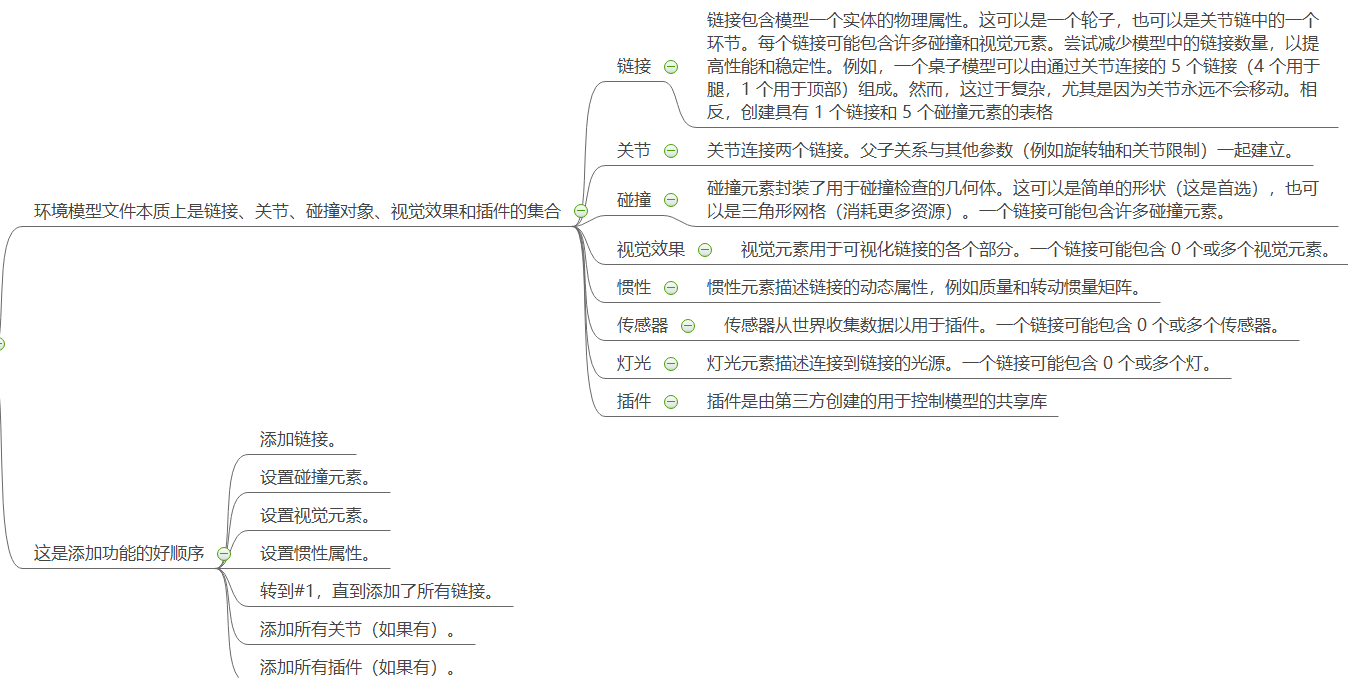 Convert the design file into urdf file and then import it into the robot model [anti theft mark - box hzj]
.
.

4) Method 4: download open source from github and use it instead [I often use this method - stealing chicken]

be careful
(1) Create a robot and put it in the gazebo environment (URDF\Xacro, you can create it yourself or GitHub) [it's troublesome to build a model, because it's not accurate, just find it online]

(1) Create a robot and put it in the gazebo environment (URDF\Xacro, you can create it yourself or GitHub) [it's troublesome to build a model, because it's not accurate, just find it online]

(1) How to build your own plug-ins

At present, there are six types of plug-ins, and each plug-in type is managed by different components of Gazebo

[the plug-in can be used wherever it is built] [anti theft mark - box hzj]
Refer to the official tutorial
http://gazebosim.org/tutorials?cat=guided_i&tut=guided_i1
.
.
.

(2) Methods of using plug-ins built by others [key points]

(1) Step 1: in gazebo, you can insert some plug-ins to simulate the characteristics of the robot's sensors and actuators. These plug-ins are described by the labels in the elements

(2) Step 2: in the urdf/xacro.sdf file of the sensor, first include the sensor model (with plug-in) into the robot sub model by using the label, and then connect different models through the label

1. Simulated 2D Radar Data
Because the sample is in my knowledge base, it will be transferred later~
.

2. Simulation camera data
Because the sample is in my knowledge base, it will be transferred later ~ [anti theft mark – box hzj]
.

3. Simulated 3D lidar data
Because the sample is in my knowledge base, it will be transferred later~
.

4. Simulated RealSense binocular camera data
Because the sample is in my knowledge base, it will be transferred later~
.

5. Depth camera integration plug-in
Because the sample is in my knowledge base, it will be transferred later~
.
.
.

Specify a random speed for link s in the world. You can set the maximum and minimum allowable values of x, y and z speed components and speed amplitude. In addition, you can set a time period after which the speed can change itself. After setting speed amplitude, you will set the direction yourself

(3) Obtain the positioning information of the robot in gazebo

Obtained in the form of plug-ins: plug-ins can be added to the urdf model of the robot

effect
The GUI overlay is treated as a transparent 2D layer at the top of the rendering window, visualizing the parameters

What functions do the simulation plug-ins of gazebo of ROS need? You can find the plug-ins on the official website or wiki [anti theft mark - box king hzj]
.
.
.

5. Import the required items of relevant gazebo through the launch file [gazebo.launch]

[this launch is dedicated to gazebo]

(2) The principle of writing gazebo.launch

Starting the gazebo environment is also to start a general launch, and then start a pile of simulation related mechanical shape, control, sensor data, environment data, plug-in data and coordinate conversion!
(1) [Environmental geometric model] set the parameters of gazebo (the most commonly used one)
If not set, use the default parameters

[system development foundation reserve] ROS development steps (Part II)
It's the same as the steps in the blog above. Let's move on~
.
.

7. Obtain the simulation data from gazebo

[in the form of. rviz, plug-ins and subscribers]
(implement your own source code before obtaining data)

be careful
Generally, you can't see the specific effect in gazebbo. You can turn off the interface of gazebo, which consumes too much computational effort
The data of the model and scene visualized by rviz and gazebo are obtained through the parameter server, not by receiving topics

(2) Through the GUI of gazebo, the published topics are displayed

Common problems in gazebo
Frequently turning on and off the gazrbo simulation environment will report an error, because gazebo is turned on again when it does not completely exit (especially for junk computers) [anti theft mark - box king hzj]

(3) For specific reference projects, or to steal the source code, you can directly run the official tutorial, deploy it, and analyze how it is implemented