2, Balking in synchronous mode
Balking mode is used when a thread finds that another thread or this thread has done the same thing, then this thread does not need to do it again and directly ends the return.
For example:

3, volatile
use:
When obtaining a shared variable, in order to ensure the visibility of the variable, you need to use volatile decoration. It can be used to modify member variables and static member variables. It can prevent threads from looking up the value of variables from their own work cache. They must get its value from main memory. Threads operate volatile variables directly in main memory. That is, the modification of volatile variable by one thread is visible to another thread.
be careful:
volatile only ensures the visibility of shared variables so that other threads can see the latest values, but it can not solve the problem of instruction interleaving (atomicity cannot be guaranteed);
cas must use volatile to read the latest value of shared variables to achieve the effect of "compare and exchange".

4, CAS
The bottom layer of cas is lock cmpchg (X86 architecture), which can ensure the atomicity of [comparison exchange] under single core cpu and multi-core cpu. In the multi-core state, when a core executes an instruction with lock, the cpu will lock the bus. When the core finishes executing the instruction, turn on the bus. This process will not be interrupted by the thread scheduling mechanism, which ensures the accuracy of memory operation by multiple threads. It is atomic.
Characteristics of CAS
The combination of cas and volatile can realize lock free concurrency, which is suitable for the scenario of few threads and multi-core cpu.
1. cas is based on the idea of optimistic locking: the most optimistic estimation is not afraid of other threads to modify shared variables. Even if they are changed, it doesn't matter. Just try again.
2. synchronized is based on the idea of pessimistic locking: the most pessimistic estimation is to prevent other threads from modifying shared variables. When locked, other threads cannot access variables.
3. cas embodies lock free concurrency and non blocking concurrency. Because synchronized is not used, threads will not fall into blocking, which is one of the factors to improve efficiency. However, if the competition is fierce, it can be expected that retries will occur frequently, but the efficiency will be affected.

3. Atomic accumulator (LongAdder)
Compare AtomicLong with LongAdder:
When accumulating 500000 data, LongAdder is four or five times faster than AtmicLong. The reason for performance improvement is very simple. When there is competition, set multiple accumulation units (which will not exceed the number of cpu cores), Thread-0 accumulates Cell[0], and Thread-1 accumulates Cell[1]... Finally summarize the results, so that they operate on different cell variables during accumulation, so as to reduce the number of cas retry failures and improve the performance.

2. @ sun.misc.contented is used to solve this problem. Its principle is to add 128 byte padding before and after the object or field using this annotation, so that the cpu can occupy different cache lines when pre reading the object to the cache, so as not to cause the invalidation of the other party's cache lines.
3. Pseudo sharing: one cache line holds multiple Cell objects@ Sun.misc.contented is used to prevent pseudo sharing.

Causes of pseudo sharing:
1. Because the speed of cpu and memory is very different, we need to read data to cache to improve efficiency.
2. The cache is in cache behavior units, and each cache line corresponds to a piece of memory, usually 64 bytes (8 long).
3. The addition of cache will result in the generation of data copies, that is, the same data will be cached in cache lines of different cores.
4. cpu should ensure data consistency. If a cpu core thread changes data, the entire cache line corresponding to other cpu cores must be invalidated.
Speed comparison of cpu reading data from different locations: 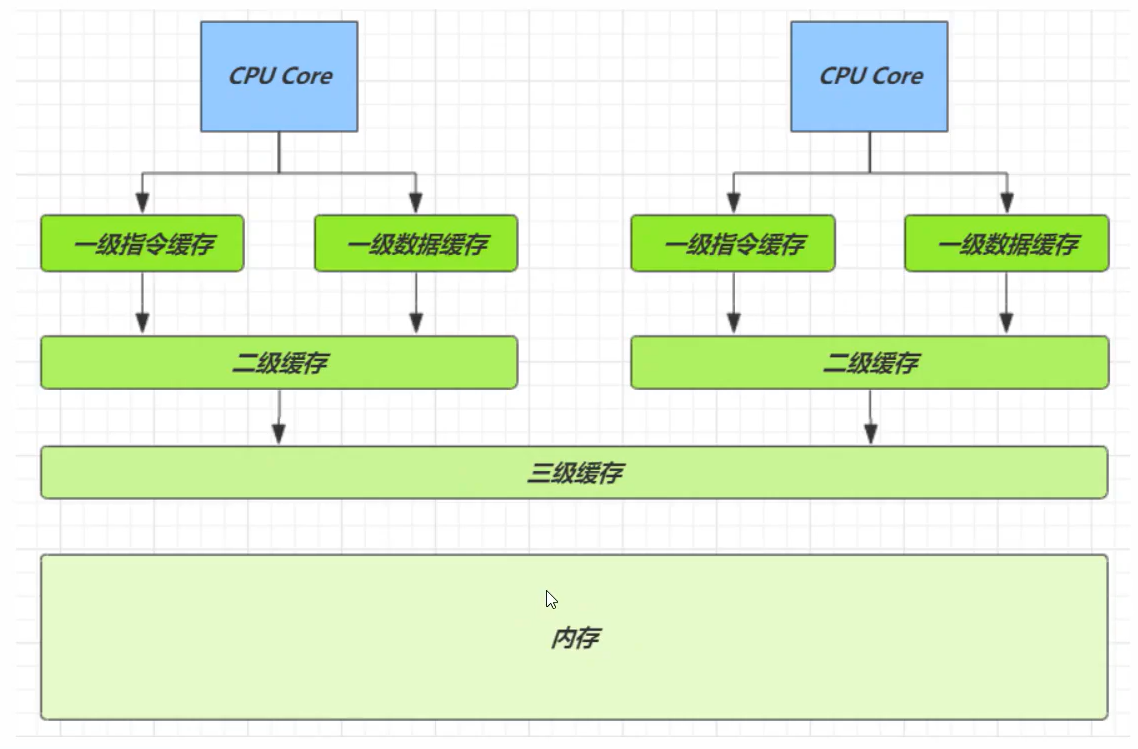 8, Immutable class
Immutable classes and objects are decorated with final and are immutable, so they are thread safe. Take String class as an example:

It can be found that all attributes in this class are final
1. The attribute is decorated with final to ensure that the attribute is read-only and cannot be modified;
2. The class is decorated with final to ensure that the methods in the class cannot be covered, so as to prevent the subclass from inadvertently breaking the ring and being immutable;
3. Using protective copy (that is, when modifying the object, you do not change the object, but directly create a new object). There are some methods related to modification. Using protective copy to ensure thread safety, such as substring method;

It can be found that the internal function is to call the String construction method to create a new String, and then enter this construction to see whether the final char[] value has been modified:

It is found that there is no. When constructing a new string object, a new char[] value will be generated to copy the content. This means of avoiding sharing by creating replica objects is called defensive copy;

9, Sharing element mode
Applicable scenario: when a limited number of objects of the same type need to be reused.
Embodiment: packaging
In JDK, wrapper classes such as boolean, byte, short, integer, Long, and character provide valueOf methods. For example, valueOf of Long caches Long objects between - 128 and 127. Objects will be reused in this range. If the range is greater than this, Long objects will be created:

be careful:
1. The range of Byte, Short and Long caches is - 128 ~ 127;
2. The range of Character cache is 0 ~ 127;
3. The default range of Integer is - 128 ~ 127. The minimum value cannot be changed, but the maximum value can be adjusted by adjusting virtual machine parameters
-Djava.lang.Integer.IntegerCache.high to change;
4. Boolean caches TRUE and FALSE;