To ensure visibility, either trigger synchronization instructions or add volatile modified memory. As long as there are modifications, synchronize each thread involved immediately

The most common cache line size is 64 bytes. When multiple threads modify independent variables, if these variables share the same cache line, they will inadvertently affect each other's performance, which is pseudo sharing 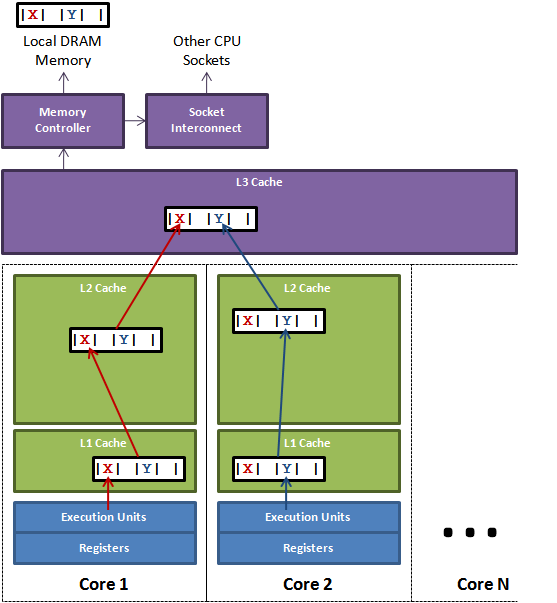 The problem of pseudo sharing is illustrated in the figure. The thread running on core 1 wants to update variable X, while the thread on Core 2 wants to update variable Y. Unfortunately, these two variables are in the same cache line. Each thread competes for ownership of the cache row to update variables. If core 1 gains ownership, the cache subsystem will invalidate the corresponding cache lines in core 2. When core 2 obtains ownership and then performs the update operation, core 1 will invalidate its corresponding cache line. This will go back and forth through L3 cache, which greatly affects the performance. If competing cores are located in different slots, additional connections across slots are required, and the problem may be more serious.

In order to improve the processing speed, the processor does not directly communicate with the memory, but first reads the data in the system memory to the internal cache (L1,L2 or others) before operation, but does not know when it will be written to the memory after operation; If you write a variable declared Volatile, the JVM will send a Lock prefix instruction to the processor to write the data in the cache line where the variable is located back to the system memory. However, even if it is written back to memory, if the cached values of other processors are still old, there will be problems in performing the calculation operation. Therefore, in order to ensure that the caches of each processor are consistent, the cache consistency protocol will be implemented. Each processor checks whether its cached values are expired by sniffing the data transmitted on the bus, When the processor finds that the memory address corresponding to its cache line has been modified, it will set the cache line of the current processor to an invalid state. When the processor wants to modify this data, it will force the data to be read from the system memory to the processor cache again.

@Contented is located in sun.misc. It is used to annotate the java attribute field and automatically fill in bytes to prevent pseudo sharing

S: This state means that the data exists not only in the local CPU cache, but also in the cache of other CPUs. The data in this state is consistent with the data in memory. When a CPU modifies the contents of the memory corresponding to the cache line, it will change the cache line to I state.

1: I nvalid when representing the contents of the cache row.

Out of order execution of CPU, in order to improve efficiency

As if serial of thread

A single thread, two statements, may not be executed in sequence

For single thread reordering, the final consistency must be guaranteed

3. Storage layout of objects in memory

4. What does the object header include

5. How to locate the object

6. How to allocate objects