The article is long. You can also choose to look at specific chapters. It is recommended to knock all multithreaded code by hand. Never believe the conclusions you see. What you run after coding is your own.

What is java multithreading? 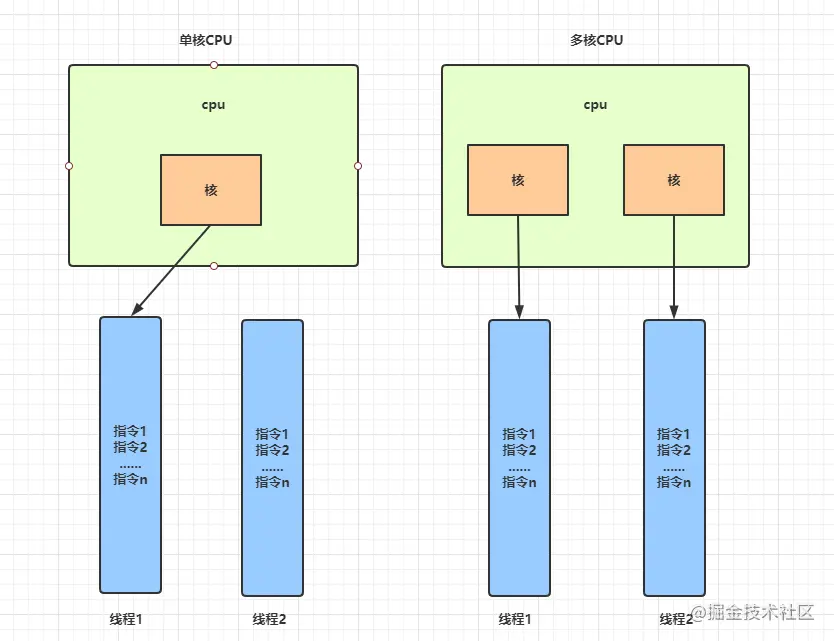 Where is multithreading difficult?

Single thread has only one execution line, the process is easy to understand, and the execution process of code can be clearly outlined in the brain

Sometimes I want to turn myself into a byte and shuttle through the server to find out the context, just like the invincible Destruction King (those who have not seen this film can see it, and their brain holes are wide open). 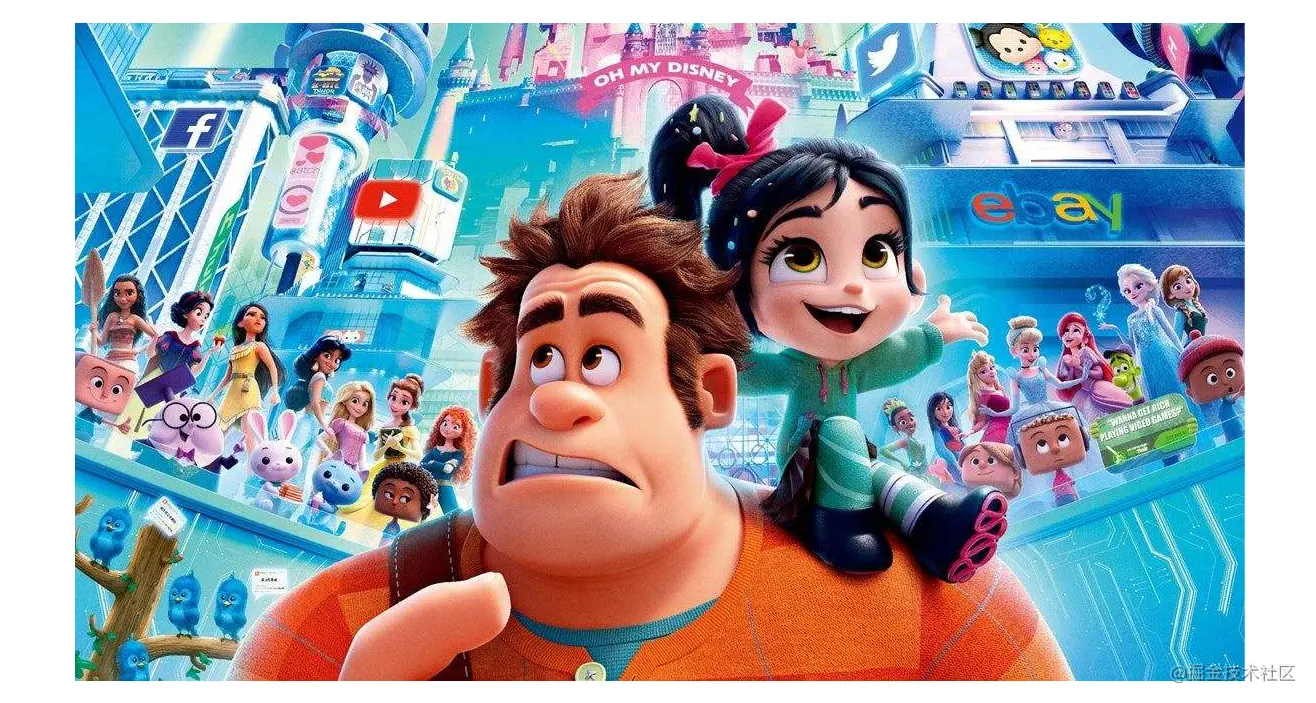 Basic use of java multithreading

Task: the execution body of the thread. That is, our core code logic

Runnable and Callable address the limitations of Thread

However, Runbale has the following limitations compared with Callable

How threads are created

How to start a thread

Under multi-core cpu, multi threads work in parallel. If there are many threads, a single core will schedule threads concurrently, and there will be the concept of context switching at runtime

When the cpu executes a thread's task, it allocates time slices to the thread. Context switching occurs in the following cases.

When context switching occurs, the operating system will save the state of the current thread and restore the state of another thread. There is a block memory address called program counter in the jvm, which is used to record which line of code the thread executes. It is thread private.

When the idea breaks, it can be set to Thread mode, and the debug mode of the idea can see the change of the stack frame 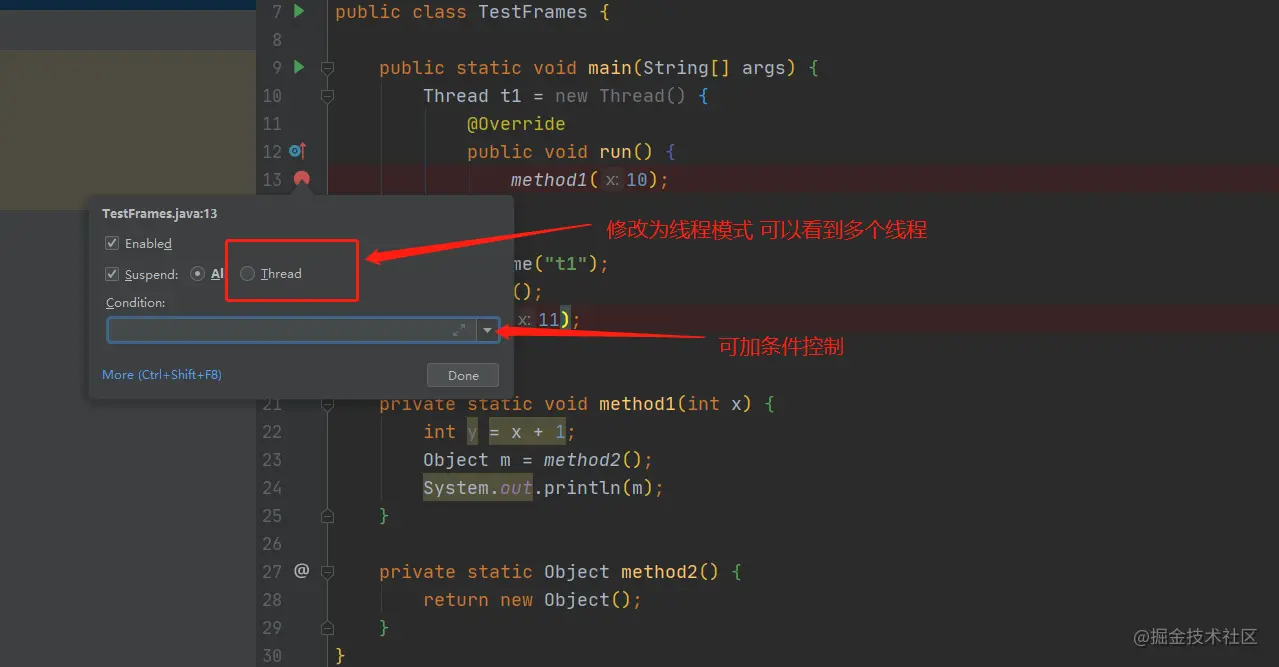 The code is as follows

As shown in the above results, thread t2 performs yield() every time it executes, and thread 1 has significantly more opportunities to execute than thread 2.

The priority of the thread is adjusted by 1 ~ 10 within the thread. The default thread priority is NORM_PRIORITY:5

When the cpu is busy, the thread with higher priority gets more time slices

When the cpu is relatively idle, the priority setting is basically useless

When the cpu is busy

When the cpu is idle

By default, the java process will not end until all threads have finished running. There is a special thread called daemon thread. When all non daemon threads have ended, they will be forced to end even if they have not finished executing.

Thread blocking can be divided into many types. The definitions of thread blocking may be different from the operating system level and the java level, but in a broad sense, there are the following ways to make thread blocking

Hibernating a thread will put the running thread into a blocking state. When the sleep time is over, the time slice competing for cpu again continues to run

The interrupt() method is used to interrupt a thread

interrupt instance: a background monitoring thread keeps monitoring. When the outside world interrupts it, it ends running. The code is as follows

Status of the thread

The above describes the use of some basic APIs. Calling the above methods will make the thread have the corresponding state. 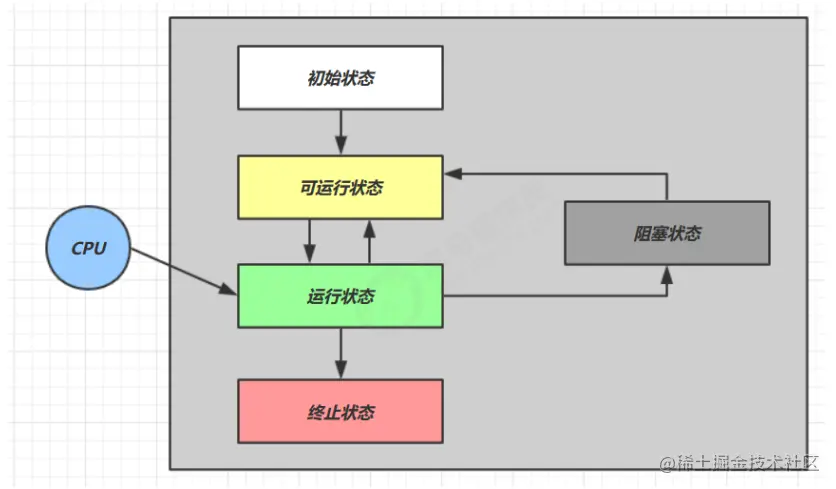 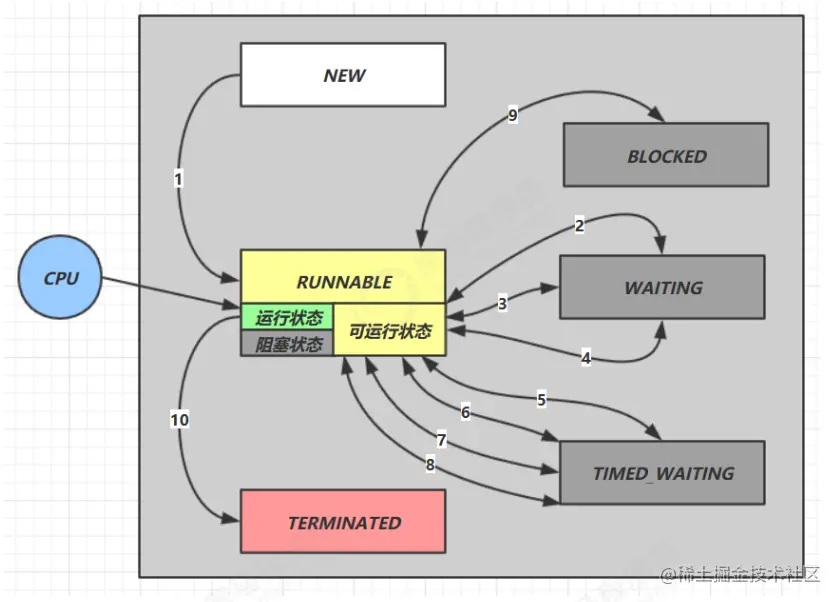 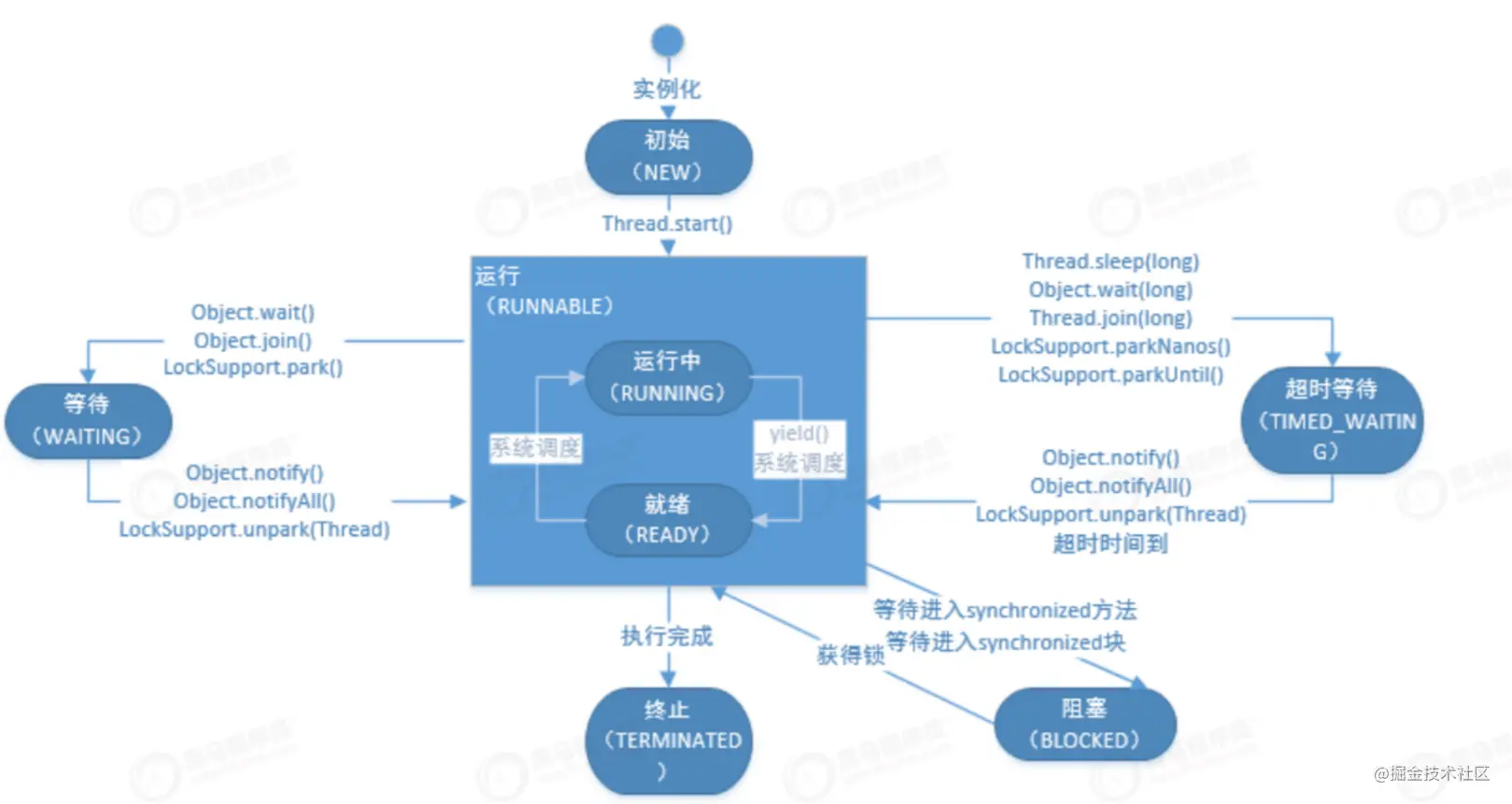 It mainly summarizes the core methods in Thread class

Critical area: a piece of code is called critical area if it performs multithreaded read and write operations on shared resources.

Note that instruction interleaving means that when java code is parsed into a bytecode file, one line of Java code may have multiple lines in the bytecode, and it may be interleaved during thread context switching.

Thread safety means that when multiple threads call the method of the critical area of the same object, the attribute value of the object must not be wrong, which ensures thread safety.

Such as the following unsafe code

However, it runs many times, and the results are different each time, and they are not 0, so it is thread unsafe.

Some thread safe classes are often mentioned in development, such as ConcurrentHashMap. Thread safety means that each independent method in the class is thread safe, but the combination of methods is not necessarily thread safe.

This keyword is used to ensure thread safety and is a blocking solution.

At most one thread can hold the object lock at the same time, and other threads will be blocked when they want to obtain the object lock. There is no need to worry about context switching.

Note: do not understand that a thread is locked, and it will be executed all the time when it enters the synchronized code block. If the time slice is switched, other threads will also be executed. After switching back, it will be executed immediately, but it will not be executed to the resources with competing locks, because the current thread has not released the lock.

When a thread executes the synchronized code block, it will wake up the waiting thread

synchronized actually uses object locks to ensure the atomicity of critical areas. The code in critical areas is indivisible and will not be interrupted by thread switching

Key point: locking is added to the object. It must be the same object before locking can take effect

When multiple threads compete to access the synchronization method of the object, the lock object will be associated with an underlying Monitor object (implementation of heavyweight lock)

What is the difference between wait and sleep?

Both will put the thread into a blocking state, with the following differences

LockSupport is a tool class under juc. It provides park and unpark methods to realize thread communication

Differences compared with wait and notity

Consumers will not consume until they consume. Inform producers to produce and continue to consume when production arrives. 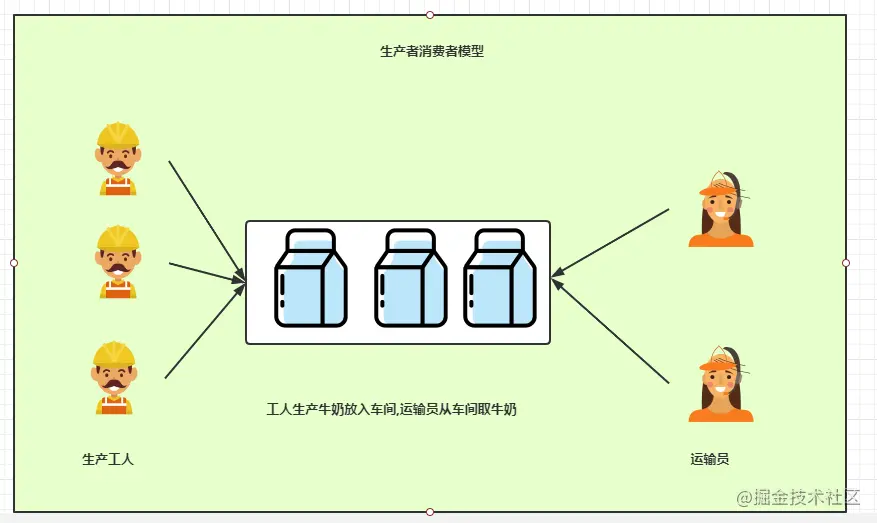 In order to more vividly express the concept of synchronization lock, here is an example in life to concretize the above concepts as much as possible.

Here is a thing that everyone is very interested in. Money!!! (except Mr. Ma). 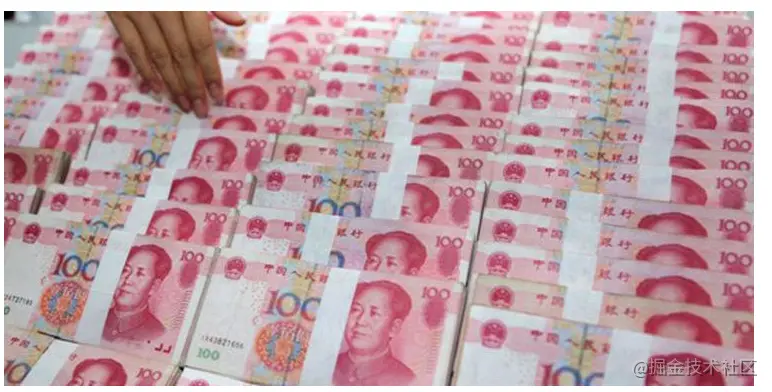 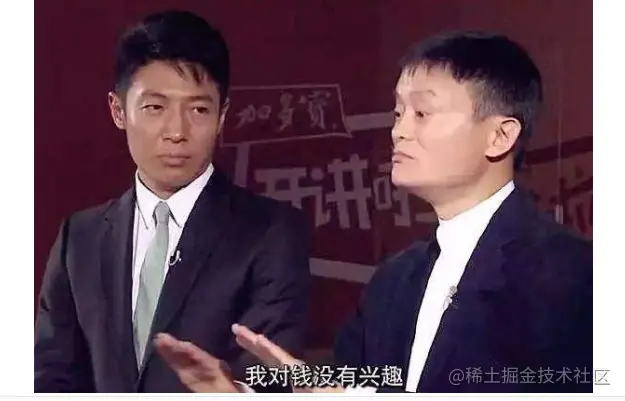 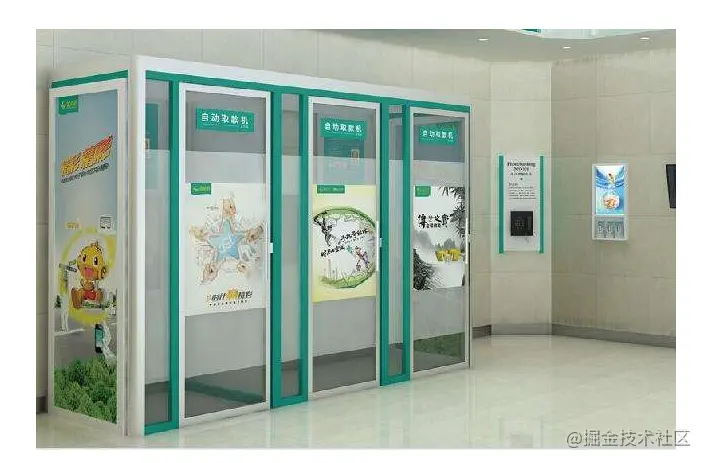 If every stranger who withdraws money is a thread, when the withdrawer enters the ATM and locks the door (the thread obtains the lock), he goes out after taking the money (the thread releases the lock), and the next person competes to the lock to withdraw the money.

Suppose that the staff is also a thread. If the teller finds that the ATM is short of money after entering, he will notify the staff to add money to the ATM (call notifyAll method), and the teller will suspend withdrawal and enter the bank lobby to block waiting (call wait method).

The staff and tellers in the bank lobby were awakened and re competed for the lock. After entering, if it was a teller, because the ATM had no money, they had to enter the bank lobby and wait.

At this time, all the people waiting in the lobby came to compete for the lock, who got it and who entered to continue to withdraw the money. 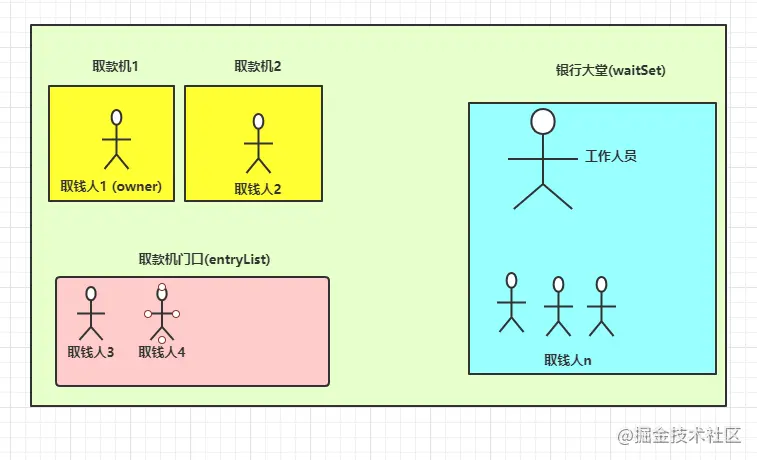 The difference from reality is that there is no concept of queuing here. Whoever grabs the lock will go in and get it.

Reentrant lock: after a thread obtains the lock of an object, it can be obtained when it needs to obtain the lock inside the execution method. Such as the following code

synchronized is also a reentrant lock. ReentrantLock has the following advantages

Speaking of deadlocks, for example,

The following is the code implementation

The detection tool can check the deadlock information 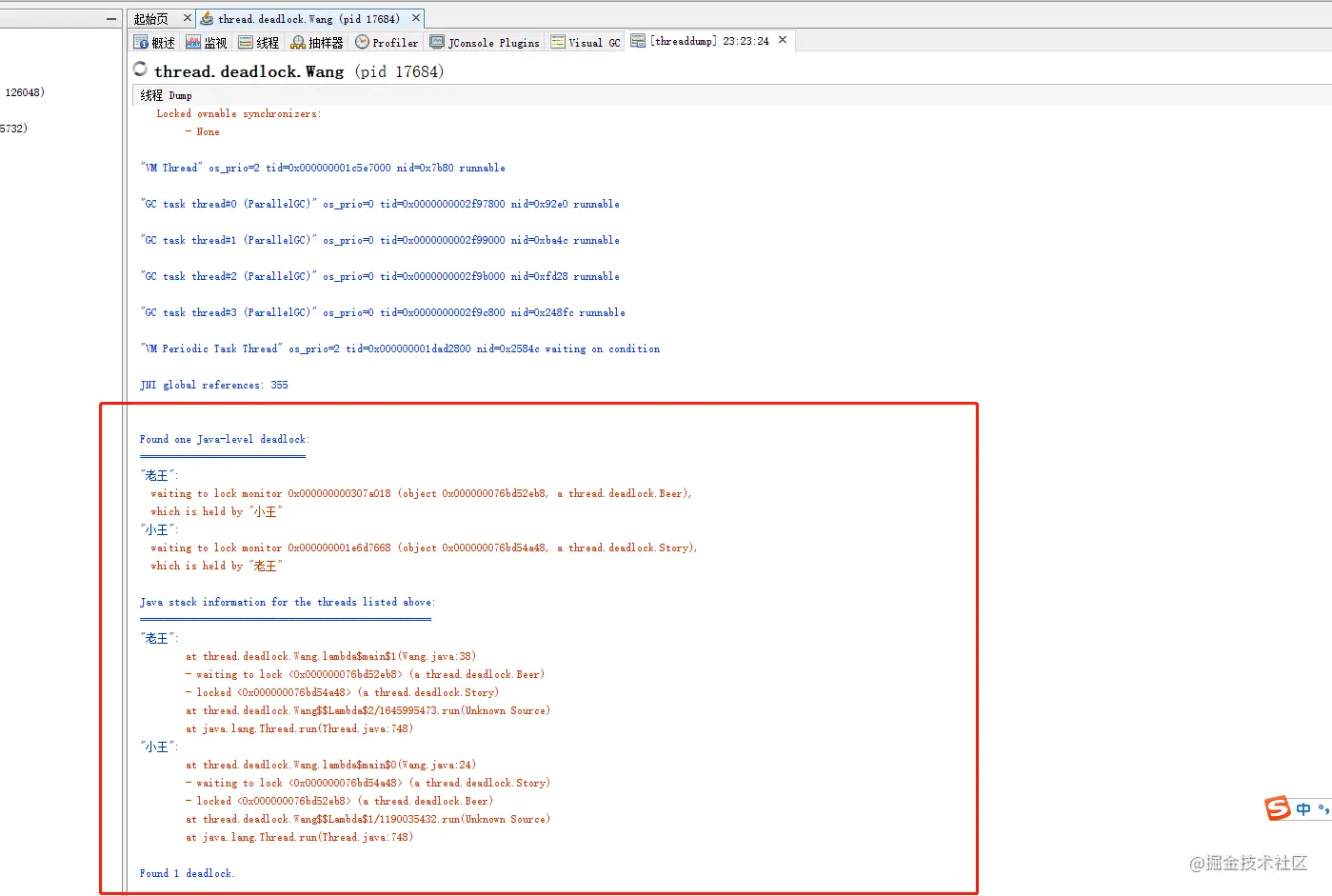 jmm is embodied in the following three aspects 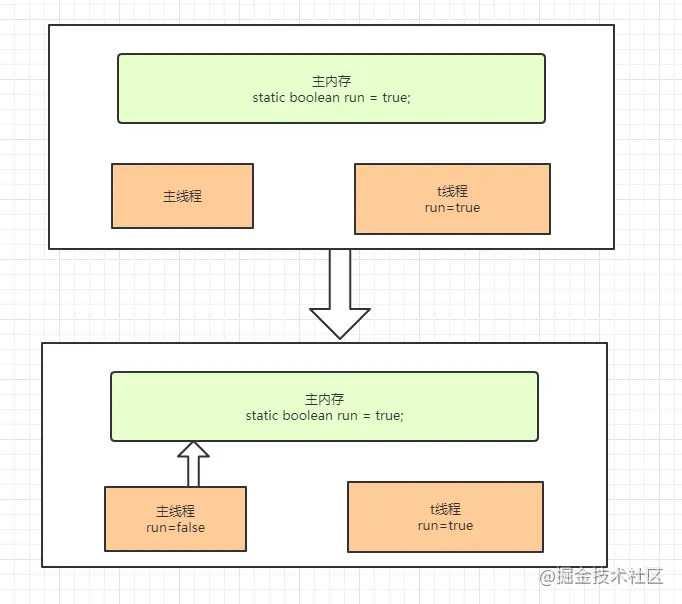 As shown in the figure above, the thread has its own work cache. When the main thread modifies the variables and synchronizes them to the main memory, the t thread does not read them, so the program cannot stop

The JVM may adjust the execution order of statements without affecting the correctness of the program, which is also known as instruction reordering

You should be familiar with atomicity. The synchronized code block of the above synchronization lock ensures atomicity, that is, a piece of code is a whole. Atomicity ensures thread safety and will not be affected by context switching.

This keyword addresses visibility and ordering, and volatile is implemented through memory barriers

Note: volatile cannot solve atomicity, that is, thread safety cannot be realized through this keyword.

volatile application scenario: one thread reads variables and another thread operates variables. After adding this keyword, it is ensured that after writing variables, the threads reading variables can perceive them in time.

When assigning a value to a variable, read the value v from the memory and obtain the new value n to be exchanged. When executing the compareAndSwap() method, compare whether v is consistent with the value in the current memory. If so, exchange n and v. if not, try again.

The bottom layer of cas is cpu level, which can ensure the atomicity of operation without using synchronization lock.

The efficiency of no lock is higher than that of the previous lock, because no lock will not involve the context switching of threads

cas is suitable for scenarios where there is little thread competition. If the competition is strong, retries often occur, which will reduce the efficiency

At this time, the exchange actually occurred, but the comparison and exchange can succeed because the value has not changed

The above two classes solve the ABA problem. The principle is to add a version number to the object. Each time you modify it, you can avoid the ABA problem

Thread pool is the most important knowledge point and difficulty of java concurrency, and it is the most widely used in practice.

Some threads are created in advance and executed directly when the task is submitted, which can not only save the time of creating threads, but also control the number of threads. 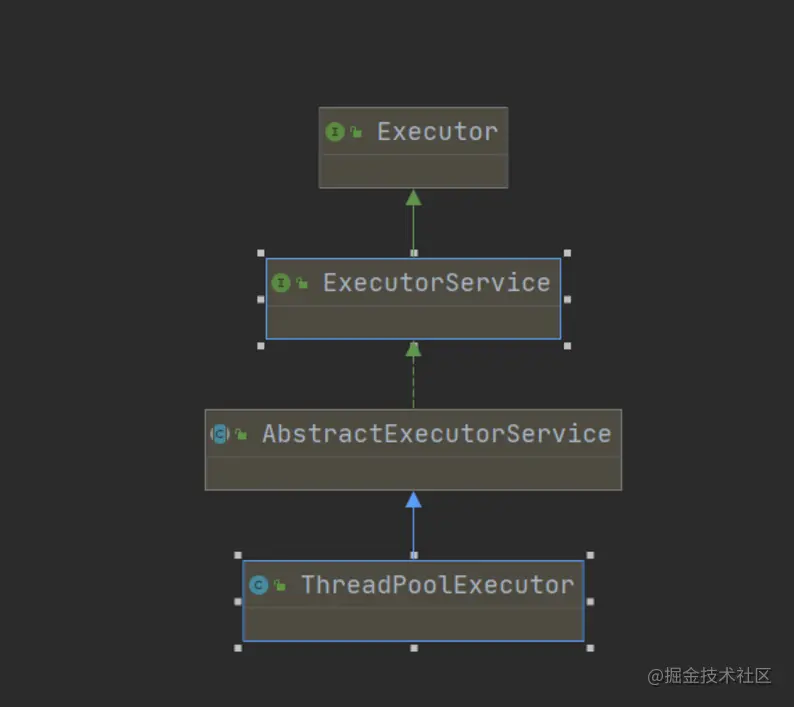 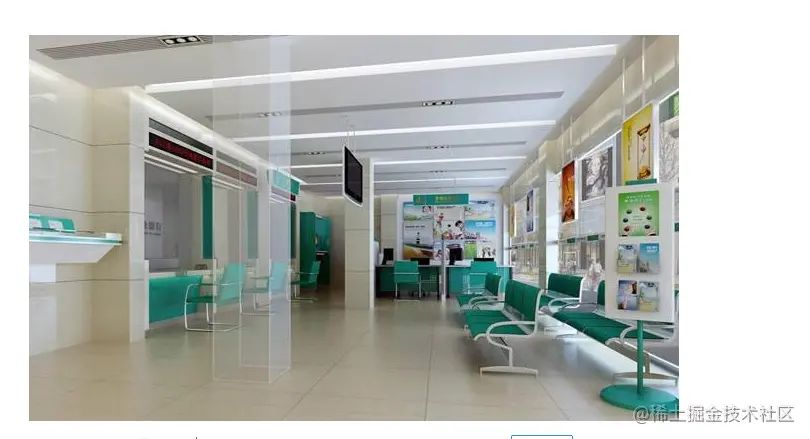 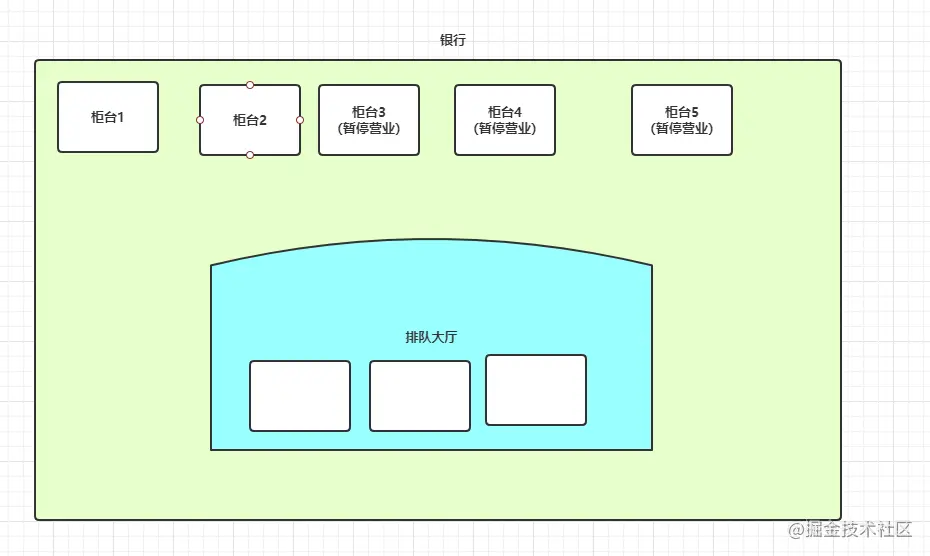 As shown in the figure above, the bank handles business.

How to submit a task

Note: the following methods are not recommended

It will make the thread pool state shutdown and cannot receive tasks, but it will finish executing the tasks in the worker thread and blocking queue, which is equivalent to graceful shutdown

cpu intensive: it refers to that the program mainly performs cpu operations

However, based on the above theory, it is still difficult to configure because the cpu operation time is difficult to estimate

Refer to the following table for the actual configuration size

1. Thread pool parameters can be configured through distributed configuration, and there is no need to restart the application to modify the configuration

Thread pool parameters change according to the number of online requests. The best way is that the number of core threads, the maximum number of threads and the queue size are configurable

java provides methods to override parameters, and the parameters will be processed inside the thread pool for smooth modification 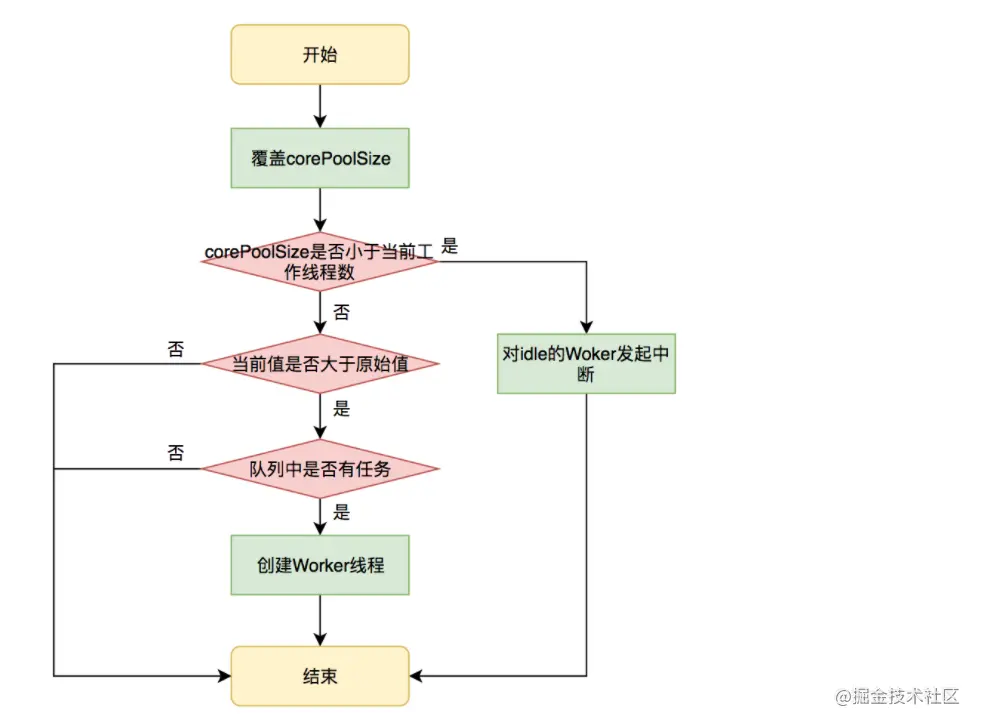 3.io intensive can be adjusted to add tasks to the maximum number of threads before placing them in the blocking queue

It is recommended to modify the method of fetching tasks from the queue: increase the timeout. If the timeout is 1 minute, the task cannot be fetched and returned

I've been working for three or four years and haven't officially written a blog. Self study has always been accumulated by taking notes. Recently, I learned java multithreading again and wanted to seriously write a blog and share this part over the weekend.

The article is long. Give a big praise to the little friends who see here! Due to the limited level of the author and the first blog, there will inevitably be mistakes in the article. We welcome your feedback and correction.