We often use the decision tree to deal with classification problems. Its process is similar to the game of 20 questions: the party participating in the game thinks of something in his mind, and other participants ask him questions. Only 20 questions are allowed to be asked, and the answer to the question can only be right or wrong. People who ask questions gradually narrow the scope of guessing things through inference and decomposition. The flowchart shown in Figure 1 is a decision tree. The rectangle represents the decision block and the ellipse represents the terminating block, indicating that the operation can be terminated after a conclusion has been reached. The left and right arrows from the judgment module are called branch es, which can reach another judgment module or termination module.

Figure 1 constructs an imaginary mail classification system, which first detects the domain name and address of sending mail. If the address is myemployee.com, put it in the category "messages to read when bored". If the email is not from this domain name, check whether the content includes the word hockey. If so, classify the email as "friend email that needs to be handled in time", otherwise classify the email as "spam that does not need to be read". 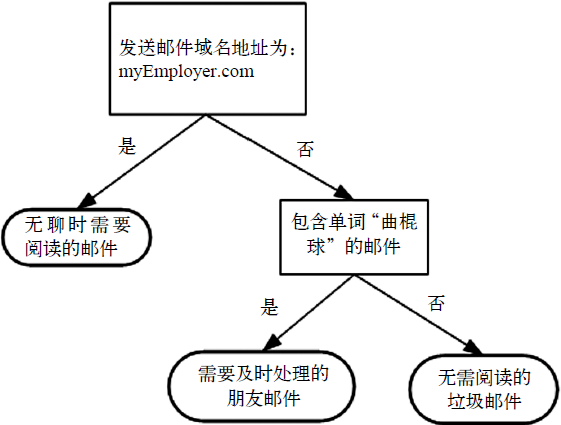 The k-nearest neighbor algorithm introduced in Chapter 2 can complete many classification tasks, but its biggest disadvantage is that it can not give the internal meaning of data. The main advantage of decision tree is that the data form is very easy to understand.

When constructing the decision tree, the first problem we need to solve is which feature on the current data set plays a decisive role in data classification. In order to find the decisive features and divide the best results, we must evaluate each feature. Assuming that the feature to be divided has been selected according to a certain method, the original data set will be divided into several data subsets according to this feature. This data subset is distributed on all branches of the decision point (key feature). If the data under a branch belongs to the same type, there is no need to further divide the data set. If the data in the data subset does not belong to the same type, the process of dividing the data subset needs to be repeated recursively until the data type in each data subset is the same.

The process of creating a branch is represented by pseudo code as follows:

Some decision tree algorithms use dichotomy to divide data, which is not used in this book. If the data is divided according to a certain attribute, four possible values will be generated. We will divide the data into four blocks and create four different branches.

This book will use ID3 algorithm to divide data sets. This algorithm deals with how to divide data sets and when to stop dividing data sets (for further information, see http://en.wikipedia.org/wiki/ID3_algorithm ). Each time we divide the dataset, we only select one feature attribute, so which feature should be selected as the reference attribute of the division?

The data in Table 1 contains five marine animals, including whether they can survive without coming out of the water and whether they have feet poof. We can divide these animals into two categories: fish and non fish.

(personal understanding: changing the disordered data into ordered data before and after is information gain, and the degree of confusion of data information is called entropy).

The measurement of set information is called Shannon entropy or entropy for short.

If the transaction to be classified may be divided into multiple classifications, the symbol \ (x_i \) is defined as:

Where \ (p(x_i) \) is the probability of selecting the classification.

In order to calculate entropy, we need to calculate the expected value of information contained in all types of possible values, which is obtained by the following formula:

Where \ (n \) is the number of classifications.

The Python function for calculating information entropy is given below. Create a file named trees.py and add the following code:

In the trees.py file, we use the createDateSet() function to get some sample data:

Another method to measure the disorder degree of a set is Gini impurity, which is simply to randomly select sub items from a data set to measure the probability that they are misclassified into other groups.

We will calculate the information entropy of the result of dividing the data set according to each feature, and then judge which feature is the best way to divide the data mart.

Add code to divide the dataset:

Test this function and the effect is as follows:

Next, we will traverse the entire data set and cycle through Shannon entropy and splitDataSet() function to find the best feature division method. 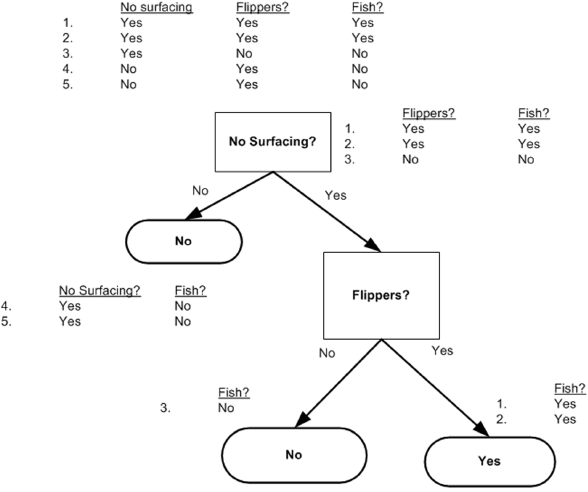 The majorityCnt function counts the frequency of each type label in the classList list and returns the category name with the most occurrences.

The tag list contains the tags of all features in the dataset. The algorithm itself does not need this variable, but in order to give a clear meaning of the data, we provide it as an input parameter.

Next, the program starts to create the tree. Here, the Python dictionary type is directly used to store the tree information. The dictionary variable myTree stores all the information of the tree. The best feature selected from the current dataset is stored in the variable bestFeat to obtain all attribute values contained in the list.

Finally, the code traverses all the attribute values contained in the currently selected feature, recurses the standby function createTree() on each dataset partition, and the return value obtained will be inserted into the dictionary variable myTree. Therefore, when the function terminates execution, many dictionary data representing leaf node information will be nested in the dictionary.

Note that subLabels = labels [:] copies the class label because the value of the label list will be changed in a recursive call to the createTree function.

In the previous section, we learned how to create a tree from a dataset. However, the representation of the dictionary is very difficult to understand, and it is difficult to draw graphics directly. In this section, we will create a tree diagram using the Matplotlib library. The main advantage of decision tree is that it is intuitive and easy to understand. If it can't be displayed intuitively, it can't give full play to its advantages. Although the graphics library we used in the previous chapters is very powerful, Python does not provide a tool for drawing trees, so we must draw tree graphs ourselves. In this section, we will learn how to write code to draw the decision tree shown in Figure 3.

Matplotlib provides an annotation tool, annotations, which is very useful. It can add text annotations to data graphics. Annotations are often used to interpret the contents of data. Because the text description directly above the data is very ugly, the tool embedded supports the scribing tool with arrow, so that we can point to the data location in other appropriate places, add description information here and explain the data content. As shown in Figure 4, there is a point at the position of the coordinate \ ((0.2, 0.1) \), we put the description information of the point at the position of \ ((0.35, 0.3) \), and point to the data point \ ((0.2, 0.1) \) with an arrow. 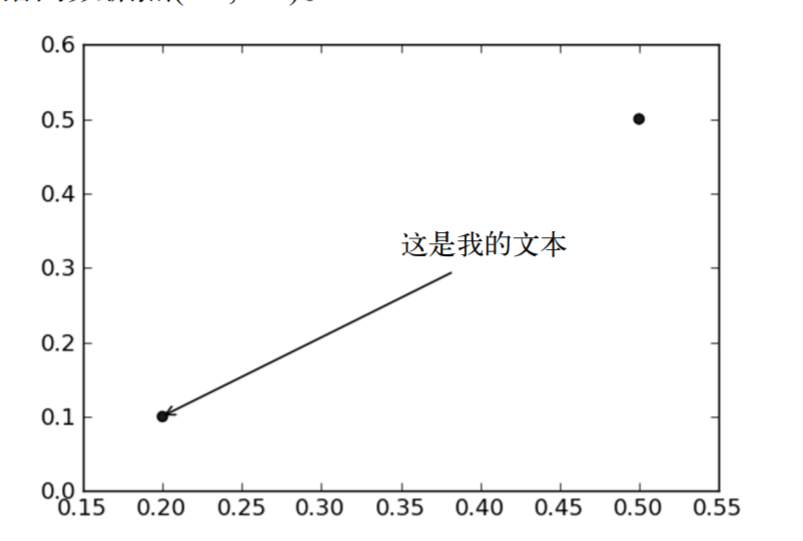 Using the annotation function of Matplotlib to draw a tree diagram, it can color the text and provide a variety of shapes for selection, and we can also reverse the arrow and point it to the text box instead of the data point. Open a text editor, create a new file named treePlotter.py, and enter the following program code. 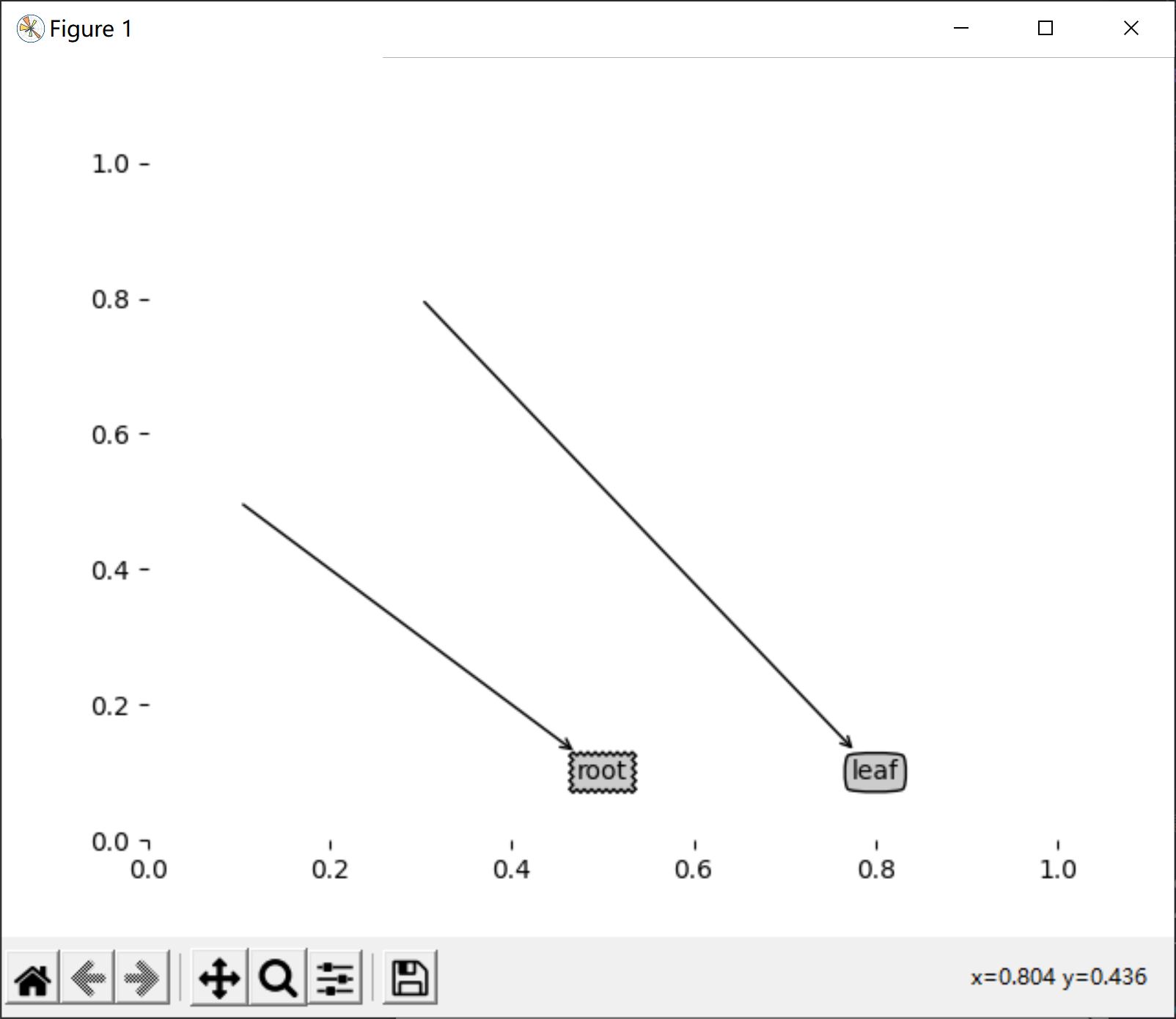 Based on this example, now learn to draw the whole tree.

Drawing a complete tree requires some skills. Although we have \ (x,y \) coordinates, how to place all tree nodes is a problem. We must know how many leaf nodes there are so that we can correctly determine the length of the \ (x \) axis; We also need to know how many layers the tree has so that we can correctly determine the height of the \ (Y \) axis. Here, we define two new functions getNumLeafs() and getTreeDepth() to obtain the number of leaf nodes and the number of layers of the tree. See the following program and add these two functions to the file treePlotter.py.

This code is different from the original book because the Python version is different. Mainly in the following two aspects:

The two functions in the above program have the same structure, and we will use them later.

The data structure used here shows how to store tree information in Python dictionary types. The first keyword is the category label that divides the dataset for the first time, and the attached value represents the value of the child node. Starting from the first keyword, we can traverse all child nodes of the whole tree. Use the type() function provided by Python to determine whether the child node is a dictionary type. If the child node is of dictionary type, it is also a judgment node, and the getnumleafs () function needs to be called recursively. The getNumLeafs() function traverses the whole tree, accumulates the number of leaf nodes, and returns the value. The second function getTreeDepth() calculates the number of judgment nodes encountered during traversal. The termination condition of this function is the leaf node. Once the leaf node is reached, it will be returned from the recursive call, and the variable for calculating the tree depth will be added by one. In order to save everyone's time, the function retrieveTree outputs the pre stored tree information, avoiding the trouble of creating a tree from the data every time you test the code. Add the following code to the file treePlotter.py:

Note: during the execution, I found that the image could not be fully displayed, so I clicked the setting to adjust the size and position of the image, as shown in the figure below.


The operation results are as follows 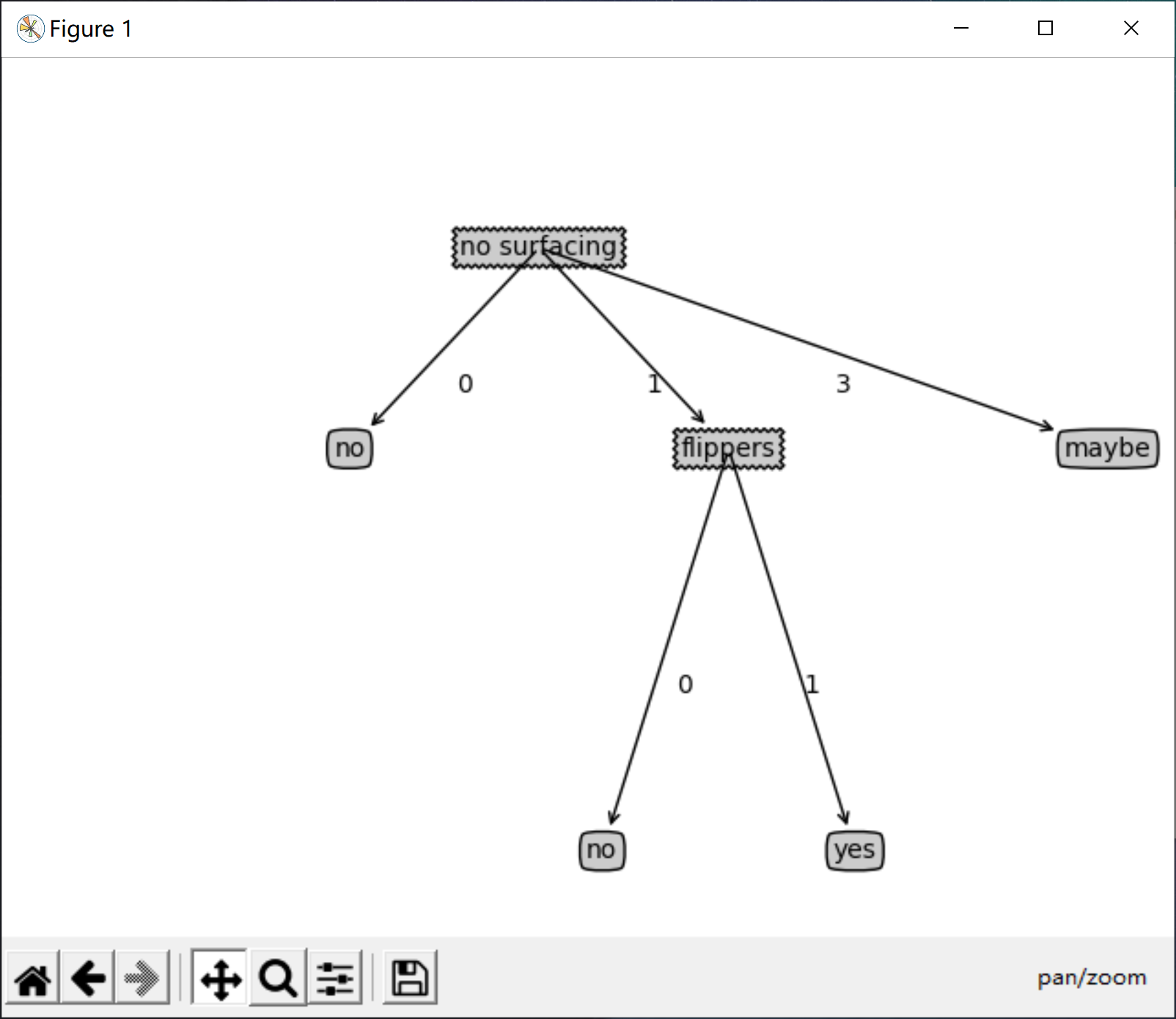