Scope of investigation: working for more than 3 years.

Before answering this question, we need to understand what is the class loading mechanism?

Simply put, class loading refers to reading the binary data in the class's. Class file into memory, placing it in the method area of the runtime data area, and then creating a java.lang.Class object in the heap area to encapsulate the class's data structure in the method area.

After the class loading process, we can build the instance object of this class in the program and complete the method call and operation of the object.

The basic working principle is shown in the figure below. 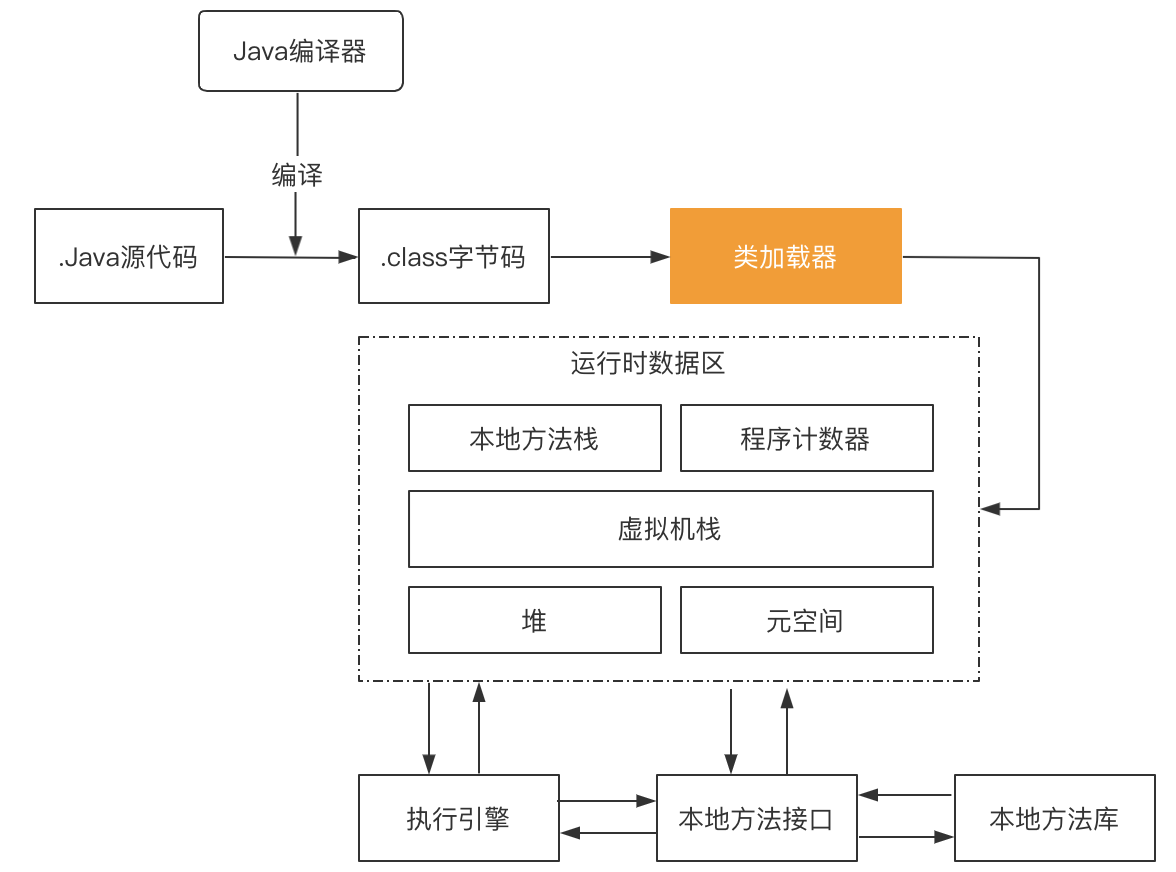 The original code of the. java suffix we wrote is compiled by the JVM to get the. class file.

The class loading mechanism is to load the. Class file into the JVM. We know that the runtime data area of the JVM is divided into heap memory, virtual machine stack, meta space, local method stack, program counter and other spaces. When the class is loaded, the data will be saved into the corresponding area according to the JVM memory rules.

Let's think about it. In actual development, what classes need to be loaded when running a program?

Since class loaders are responsible for the loading behavior of all classes related to system operation, the JVM provides three types of loaders for classes in different locations:

From the description of the above three class loaders, different loaders represent different loading functions. When a class defined by ourselves is to be loaded into memory, the working principle of the class loader is shown in the figure below. 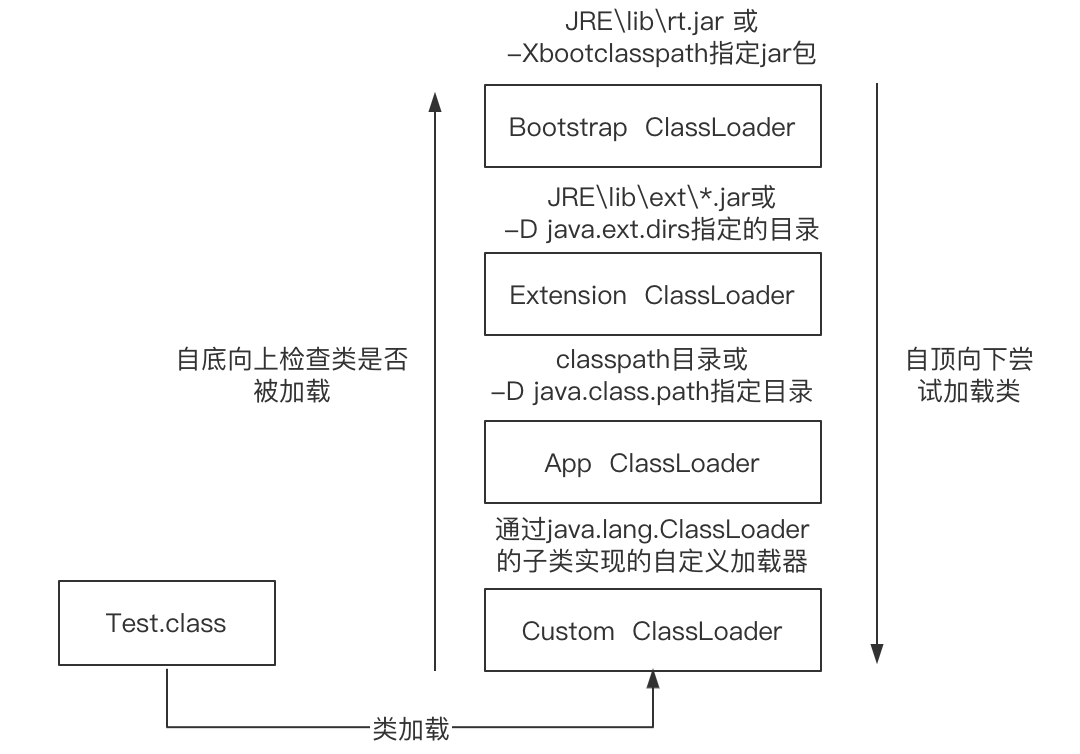 PDM is only a mechanism recommended by Java, not mandatory. You can inherit the java.lang.ClassLoader class and implement your own class loader. If you want to maintain PDM, rewrite findClass(name); If you want to destroy PDM, override loadClass(name). JDBC uses thread context loader to break PDM, because JDBC only provides interface, not implementation.

The following code demonstrates the loader used by the class.

It is proved that ClassLoaderExample is loaded by AppClassLoader.

Why use PDM to implement class loading in Java? There are several purposes

What does a class do during loading? What is its implementation principle?

Class starts from being loaded into the virtual machine memory to unloading the memory. Its whole life cycle includes seven stages: loading, verification, preparation, parsing, initialization, use and unloading. Their sequence is shown in the following figure:

The process of class loading includes five stages: loading, verification, preparation, parsing and initialization. In these five phases, the sequence of loading, verification, preparation and initialization is determined, while the parsing phase is not necessarily. In some cases, it can start after the initialization phase. It is also noted that several stages here start in sequence rather than in sequence, because these stages are usually intermixed and usually invoke or activate another stage in the execution of a phase.

The work performed in each stage is shown in the figure below.

The following is a detailed analysis of the detailed workflow of the class loader at each stage.

”The first process of loading "yes" class plus mechanism ". In the loading stage, the virtual machine mainly completes three things:

(3) A Class object representing this Class is generated in the heap as an access to these data in the method area.

The main role of validation is to ensure the correctness of the loaded classes. It is also the first step in the connection phase. To put it bluntly, that is, the loaded. class file can't harm our virtual machine, so check and verify it first. He mainly completes the verification in four stages:

(1) Verification of file format: verify whether the byte stream of. Class file conforms to the format specification of class file and can be processed by the current version of virtual machine. It mainly checks the magic number, major version number, constant pool, etc. (magic number and major version number are the data information contained in the. Class file, which can be understood here).

(3) Bytecode verification: This is the most complex stage of the whole verification process. It mainly determines that the program semantics is legal and logical through data flow and control flow analysis. After verifying the data type in the metadata verification stage, this stage mainly analyzes the class methods to ensure that the class methods will not do anything harmful to the security of the virtual machine.

(4) Symbolic reference validation: it is the last stage of validation, which occurs when the virtual machine converts symbolic references to direct references. It is mainly used to verify the information outside the class itself. The purpose is to ensure that the parsing action can be completed.

For the whole class loading mechanism, the verification stage is a very important but non essential stage. If our code can ensure that there are no problems, we don't need to verify. After all, verification takes a certain time. Of course, we can use - xverity: none to turn off most of the validation.

The preparation phase is mainly to allocate memory for class variables and set initial values. This memory is allocated in the method area. At this stage, we only need to pay attention to two key words: class variable and initial value:

(2) The initial value here refers to the default value of the data type, not the value given by the display in the code. For example, public static int value = 1;, Here, the value after the preparation phase is 0, not 1. The action with a value of 1 is in the initialization phase.

Symbol reference: use a group of symbols to describe the referenced target, which can be literal in any form, as long as it can locate the target without ambiguity. For example, in the class, the teacher can use Zhang San to represent you or your student number to represent you, but in any way, these are only a code (symbol), which points to you (symbol reference) Direct reference: a direct reference is a pointer that can point to the target, a relative offset, or a handle that can directly or indirectly locate the target. Related to the memory implemented by the virtual machine, the direct reference of different virtual machines is generally different. The parsing action mainly refers to class or interface, field, class method, interface method, method type, method handle and call point qualifier.

A class will be initialized in the following cases.

In the class loading mechanism, there are still many extensible knowledge. We consolidate and analyze it through three extended variants

After understanding the loading principle of classes, it is not difficult to find that the memory allocation time of static methods is different from that of instance methods.

It means that in static methods, non static member variables can be invoked, which may not be initialized. Therefore, the compiler will report an error.

In addition, there are other variants. For example, static blocks

When is a static block executed?

The initialization stage is the last stage in the class loading process. This stage is the process of executing the < clinit > method of the class constructor. The < clinit > method is generated by the compiler automatically collecting the assignment actions of all class variables (static variables) in the class and the statements in the static statement block. Once a class enters the initialization stage, it is bound to execute the static statement block. Therefore, static blocks must be executed during class loading, but not during loading.

Clinit is a class constructor method, that is, the jvm will call the clinit method during class loading – verification – parsing – initialization.

There are the following codes, please say their loading order

To solve this problem, you need to understand the loading order of classes. The initialization rules are as follows.

In addition to the three types of loaders provided by the system, we can also define our own class loaders.

You need to inherit the java.lang.ClassLoader class to implement the custom class loader, and override the findClass method or loadClass method.

1. If you don't want to break the parental delegation model, you just need to override the findClass method.

This method is not implemented. It directly returns ClassNotFoundException. Therefore, the custom class loader must override the findClass method.

2. If you want to break the parental delegation model, override the loadClass method.

The general process of loadClass method in ClassLoader is as follows:

Do not destroy the parent delegation custom class loader practice

Create a PrintClass.java class in the / tmp directory. The code is as follows.

Use javac PrintClass to compile the source file to get the PrintClass.class file

Next, create a custom class loader in the Java project. The code is as follows.

MyClassLoader inherits ClassLoader and overrides the findClass method. In this method, the. class file is loaded from the specified path.

As you can see, the class loader of PrintClass.class is MyClassLoader.

In the MyClassLoader class, override the loadClass method. The code is as follows.

Copy PrintClass.java to the / tmp/cl directory and modify the print method.

In the above code, load the PrintClass.class file in the tmp and tmp/cl directories respectively, and the print results are as follows.

Conclusion: by rewriting the loadClass method, the class created by yourself can be directly loaded by the first loader without entrusting the parent loader to find it, so as to realize the destruction of parental delegation

How does Tomcat implement the isolation of application jar packages?

I believe many children have encountered this problem during the interview.

Before thinking about this problem, let's think about what problem Tomcat should solve as a JSP/Servlet container?

In order to achieve these purposes, Tomcat must not use the default class loading mechanism. 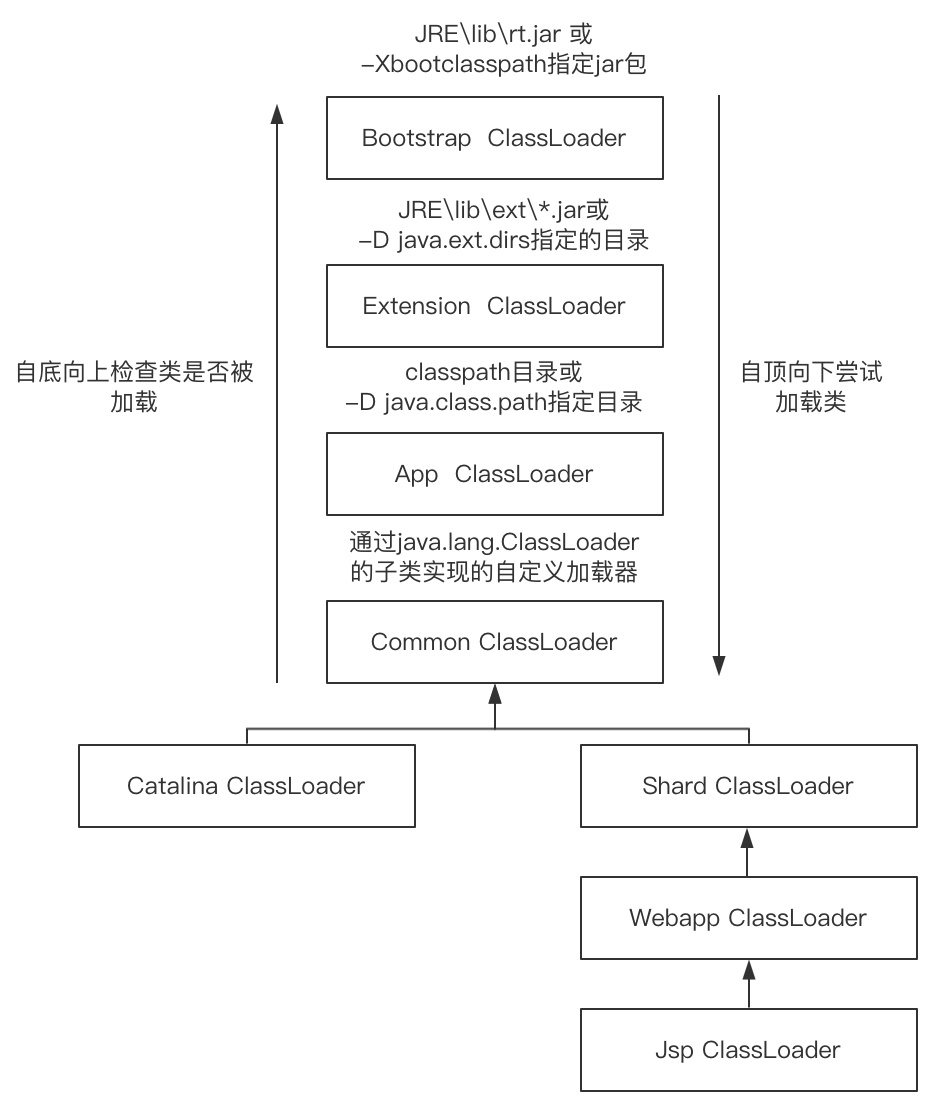 We can see that the loading of the first three classes is consistent with the default. CommonClassLoader, CatalinaClassLoader, SharedClassLoader and WebappClassLoader are the class loaders defined by Tomcat. They load the Java class libraries in ${TOMCAT_HOME}/lib and / WebApp/WEB-INF / * respectively.

As can be seen from the delegation relationship in the figure:

The loading range of JasperLoader is only the. Class file compiled by the JSP file. Its purpose is to realize the HotSwap function of JSP.

Obviously, in order to achieve isolation, Tomcat breaks the parental delegation, and each webappClassLoader loads the class files in its own directory.

A small interview question involves a huge amount of technical knowledge behind it.

In the interview, if you don't have systematic knowledge, you can't find the entry point when answering such questions. In particular, when there are too many entry points for such a more general question, the answer will be confused. Focus on [Mic learning architecture] official account, get more original works.