Why does Ali have to ask Redis for an interview? Alibaba architect's Redis distributed lock actual combat sharing

1, What is a distributed lock?

We all know the concept of lock when learning Java, such as synchronized lock based on JVM implementation and a set of code level locking mechanism lock provided by jdk. We often use these two locks in concurrent programming to ensure the correctness of code running in multi-threaded environment. However, these locking mechanisms are not applicable in the distributed scenario, because in the distributed business scenario, our code runs on different JVMs or even different machines, and synchronized and lock can only work in the same JVM environment. Therefore, distributed locks are needed at this time.

For example, there is a scene that is to grab the consumer voucher at all. The reason for the epidemic is that Alipay recently opened up 8 points and 12 o'clock o'clock to open up the first come first served and the consumer tickets had a fixed amount.

So at this time, we have to use distributed locks to ensure the correctness of access to shared resources.

2, Why use distributed locks, huh?

Assuming that distributed locks are not used, let's see if synchronized can guarantee? Actually, we can't. let's demonstrate it.

Now I wrote the first mock exam of the voucher, a simple springboot project. The code is very simple. It means that the number of remaining coupons is obtained from Redis first, and then the judgment is greater than 0. Then one simulation is grabbed by one user, then one is reduced to one, then the remaining Redis consumption is increased. I didn't get it. The whole code is synchronized, and the inventory quantity set by redis is 50. 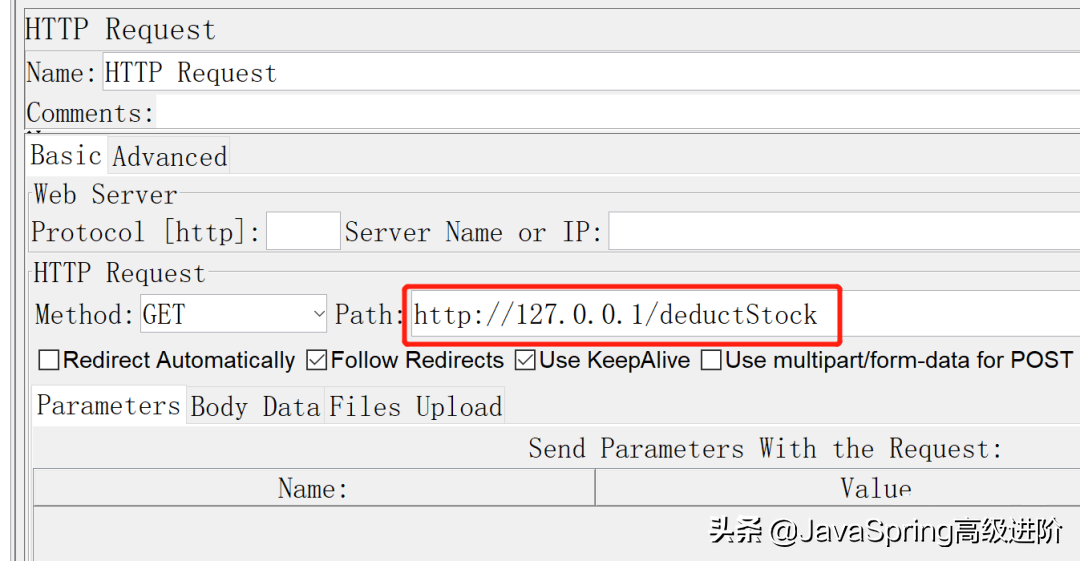 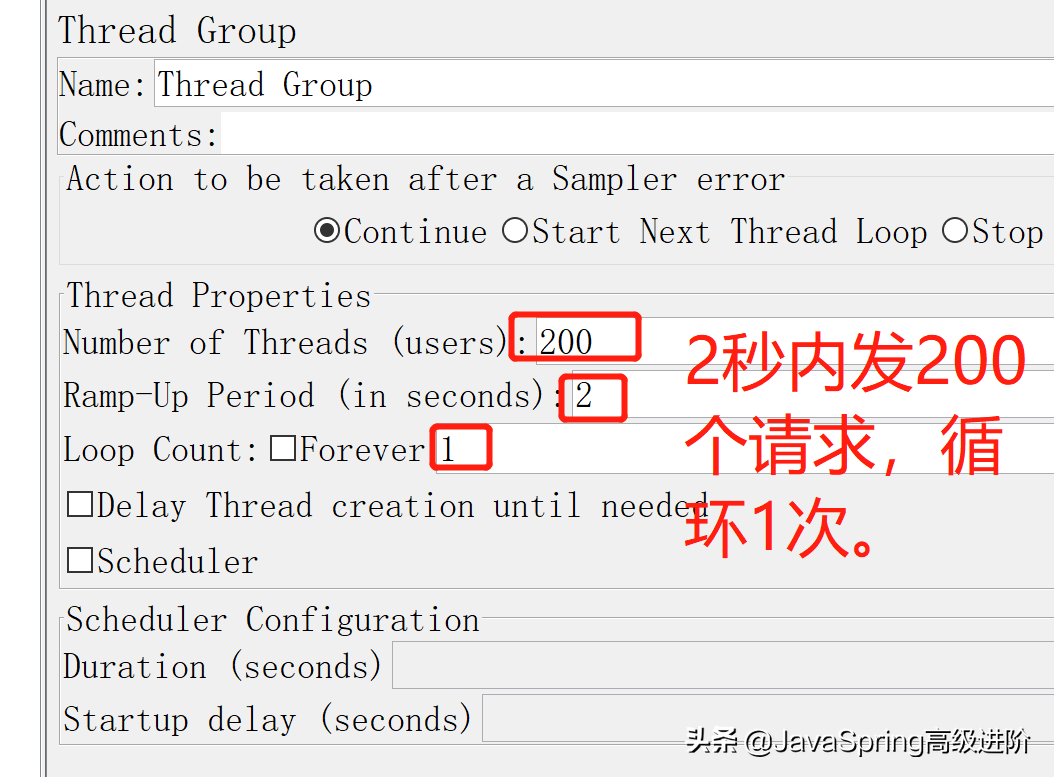 Then we take a look at the console output. We can see that the two web instances we are running, many of the same coupons are robbed by different threads, which proves that synchronized does not work in this case, so we need to use distributed locks to ensure the correctness of resources. 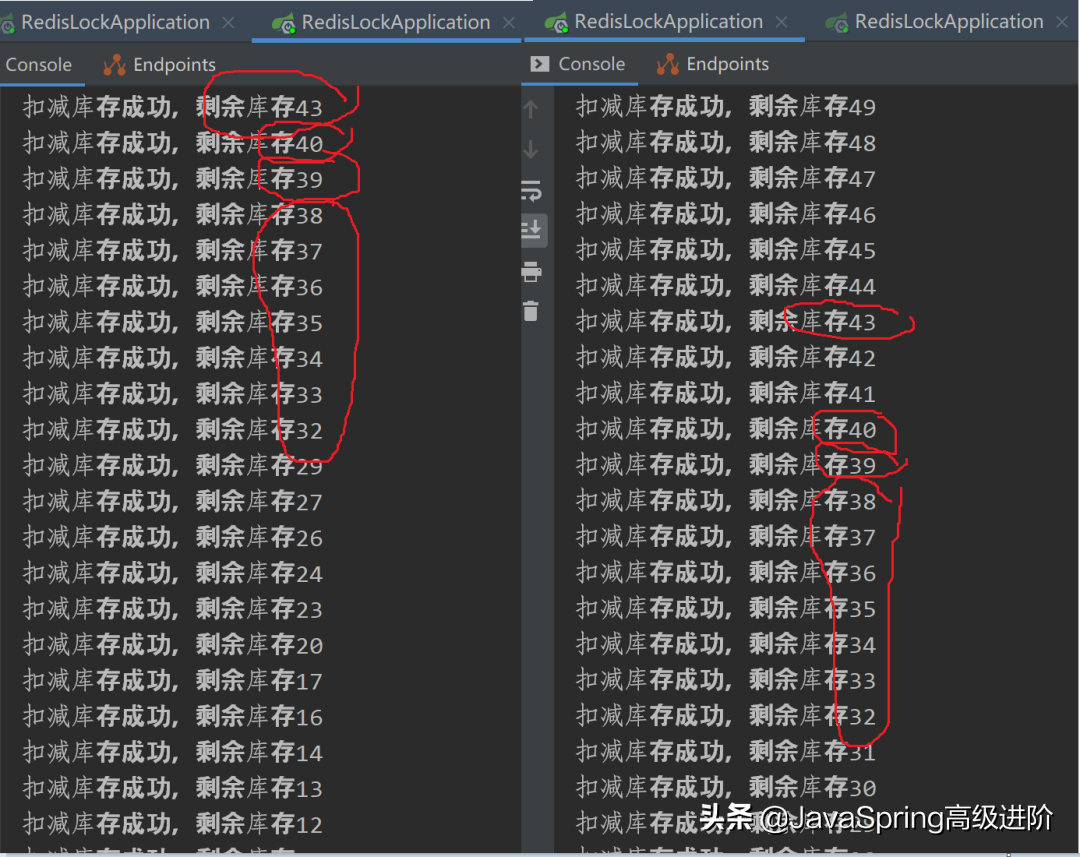 3, How to implement distributed locks with Redis?

Before implementing distributed locks, we first consider how to implement them and what functions of locks should be implemented.

Based on the basic features of distributed locks listed above, let's think about how to implement Redis?

The basic syntax of redis Setnx command is as follows:

Still set the inventory quantity to 50. Let's test it again with jmeter and change the test address of jmeter to
127.0.0.1/stock_redis_lock, test again with the same settings. 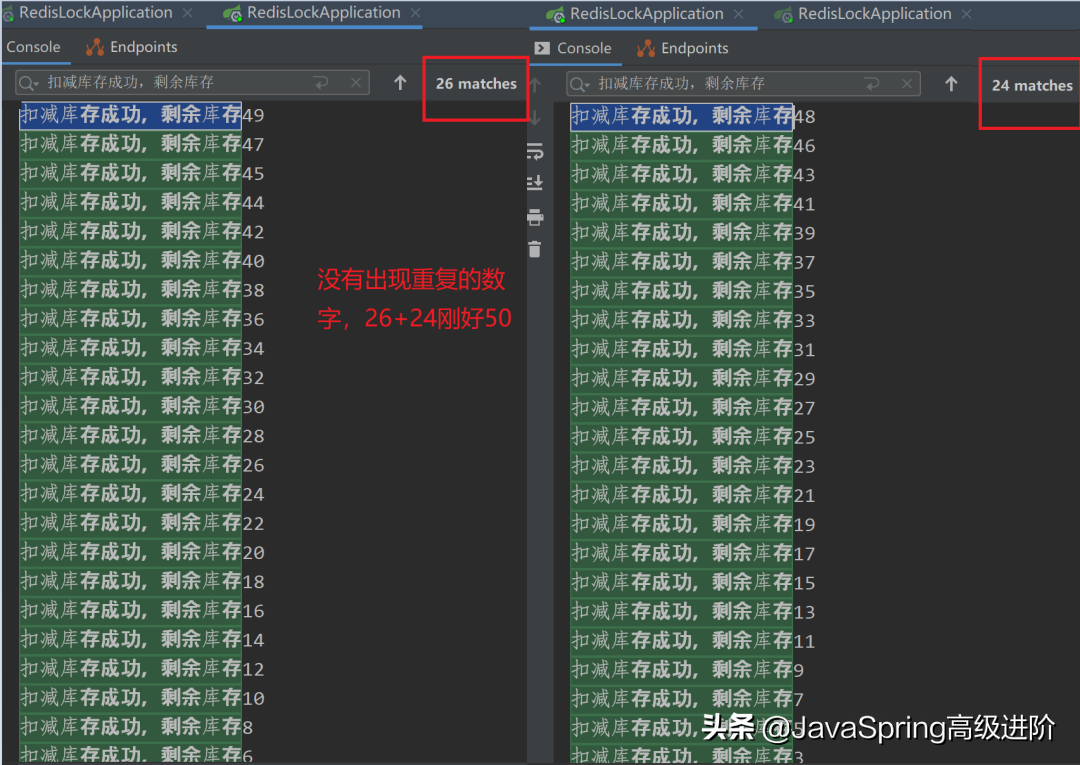 Starting from redis version 2.6.12, the behavior of the SET command can be modified through a series of parameters:

EX second: set the expiration time of the key to second seconds. The effect of SET key value EX second is the same as that of set key second value

Nx: set the key only when the key does not exist. SET key value NX effect is equivalent to SETNX key value

20: Set the key only when the key already exists

The StringRedisTemplate of SpringBoot also has corresponding method implementation, as shown in the following code:

Is this perfect? Well, for scenarios with low concurrency requirements or non large concurrency, this is OK. However, in the scenario of rush buying and second kill, when the traffic is large, the server network card, disk IO and CPU load may reach the limit, and the server's response time to a request is bound to be much slower than under normal circumstances. Suppose that the timeout of the lock just set is 10 seconds, If a thread fails to finish executing the lock within 10 seconds after it gets the lock for some reason, the lock will become invalid. At this time, other threads will seize the distributed lock to execute the business logic, and then the previous thread will execute the code to release the lock in finally, and the lock of the thread occupying the distributed lock will be released, In fact, if the thread just occupying the lock has not finished executing, other threads will have the opportunity to obtain the lock again... In this way, the whole distributed lock will fail, which will have unexpected consequences. The following figure simulates this scenario. 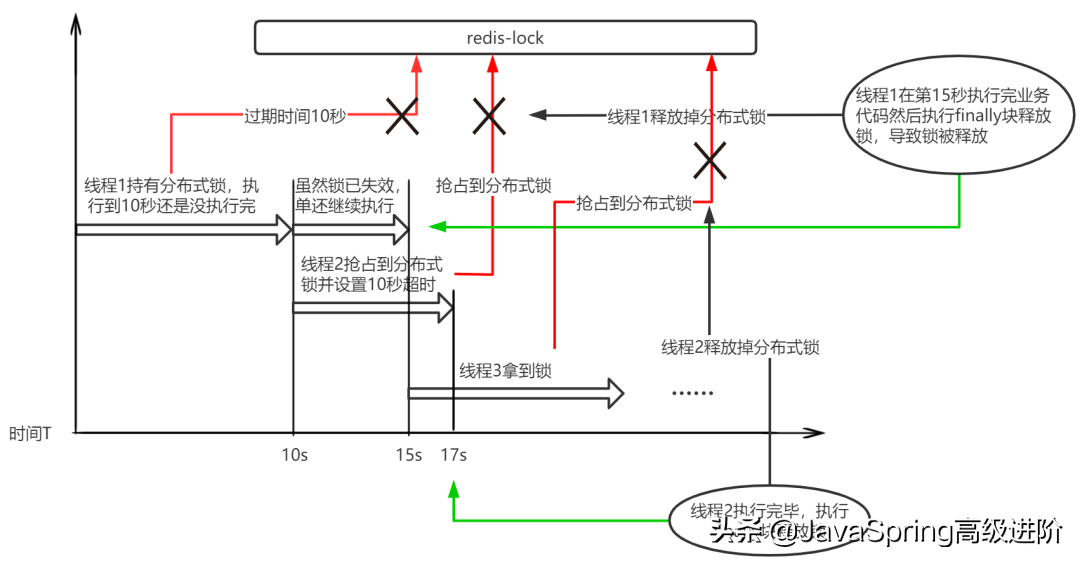 The first problem is easy to solve. When setting a distributed lock, we produce a unique string in the current thread, set value to this unique value, and then judge that the value of the current lock is the same as that set by ourselves in the finally block, and then execute delete, as follows:

Once the problem is solved (imagine what else is wrong with the above code, which will be discussed later), the lock timeout is very critical. It can't be too large or too small. Therefore, it is necessary to evaluate the execution time of the business code, such as setting 10 seconds or 20 seconds. Even if you set an appropriate timeout for your lock, the above analysis can not be avoided. For some reasons, the code is not executed within the normal evaluation time, so the solution at this time is to extend the timeout for the lock. The general idea is that the business thread acts as a separate sub thread to regularly monitor whether the distributed lock set by the business thread still exists. If it exists, it means that the business thread has not finished executing, then extend the timeout of the lock. If the lock does not exist, the business thread completes executing, and then ends itself.

The logic of "lock life extension" is true and a little complex. There are too many problems to consider. If you don't pay attention, there will be bug s. Don't look at the few lines of code for implementing distributed locks above, and think that the implementation is very simple. If you don't have actual high concurrency experience when implementing them, you will certainly step on many holes, for example,

Therefore, the implementation of the logic of "lock for life" is still a little complicated. Fortunately, there is an existing open source framework on the market to help us implement it, that is, Redisson. 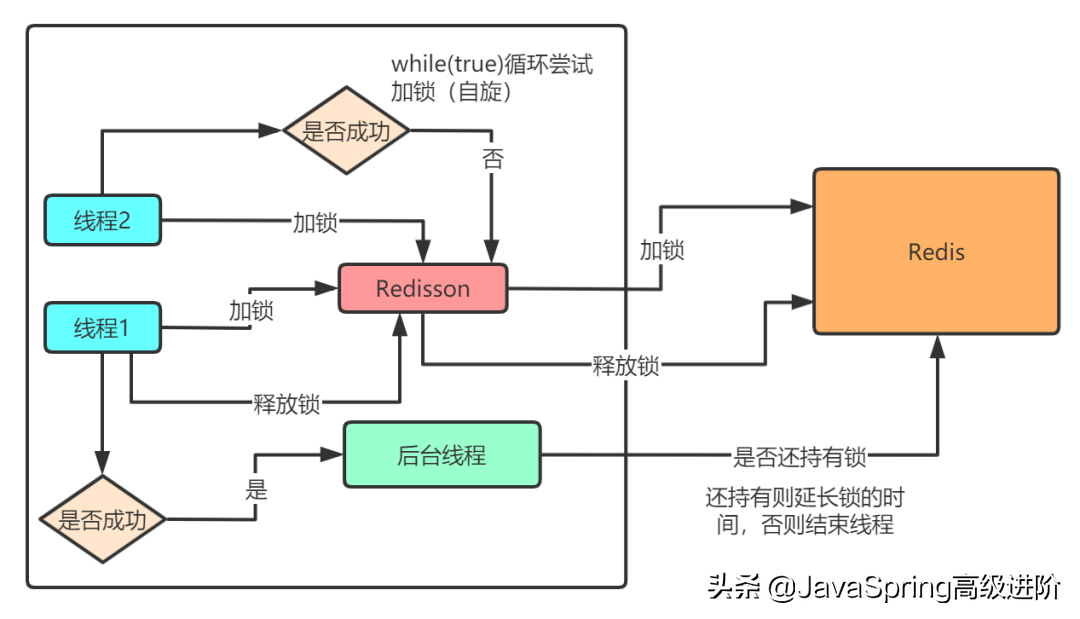 Let's take a look at the code after Redisson is used.

① First, add the maven coordinates of Redisson in the pom.xml file

Is the API provided by Redisson's distributed Lock very simple? Just like the AQS Lock mechanism in Java concurrency, obtain a RedissonLock as follows

When using Redisson locking, it also provides many API s, as follows 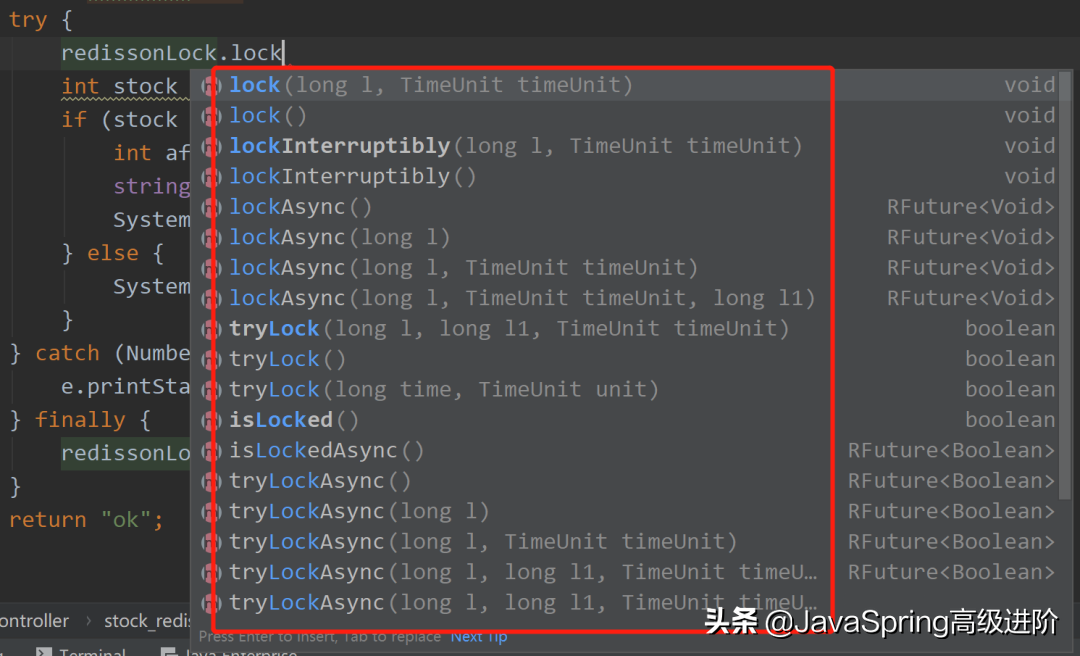 Now we choose to use the simplest nonparametric lock method. Simply click in and look at its source code. We find the final code for locking as follows:

We can see that the underlying layer uses Lua script to ensure atomicity, locks implemented by Redis's hash structure, and reentrant locks.

It seems simpler than our own implementation of distributed locks, but he has all the lock functions we write, and he also has those we don't have. For example, the distributed lock implemented by him supports reentry and waiting, that is, try to wait for a certain time and return false if you don't get the lock. redissonLock.lock() in the above code; Is always waiting, internal spin attempts to lock.