Concurrent programming: the things executed out of order will be clear to you in five minutes

What is out of order execution

Why do we need to execute out of order

The main reason is that the pipeline technology is adopted inside the CPU [2]. Abstractly and simply, the execution process of a CPU instruction can be divided into four stages: fetch, decode, execute and write back.

The ideal situation is shown in the figure below: there is no dependency between instructions, which can maximize the parallelism of the pipeline.

stay   Execute in sequence   In this case, once the instruction dependency is encountered, the pipeline will stop. For example:

In this way, the pipeline execution unit can be in working state as much as possible.

In the multithreaded environment, the existence of out of order execution is easy to break some expectations and cause some unexpected problems.

There are two cases of out of order execution:

Let's take a look at an example of compiler instruction rearrangement:

Under the compilation optimization option of O1, the compiled assembly instructions are not rearranged (it can be seen from the background color of the left and right code lines).

To prevent the compiler from rearranging the instructions of these two sentences, you need to insert a compiler fence between them. 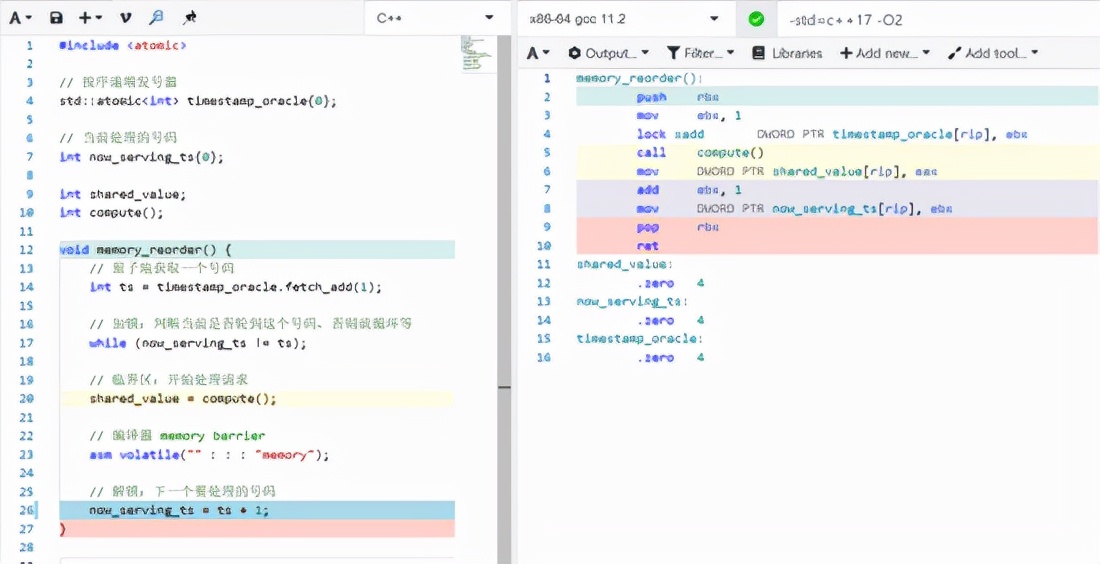 This is the way to write the compiler fence of GCC extension. This instruction tells the compiler (GCC official document [3]):

For point 2, sometimes we only need to refresh some variables. Refreshing all registers does not necessarily meet our expectations, and it will introduce unnecessary overhead. GCC supports compiler fence for specified variables.

The middle inline assembly instruction tells the compiler not to disorderly write(x) and read(y).

In the above example, due to the existence of compiler fence, the compiler will not rearrange the instructions inside function f1 and function f2.

At this time, if the CPU is not out of order during execution, it is impossible   r0 == 0 && r1 == 0   Unfortunately, this can happen due to the out of order execution of the CPU. See the following example:

To prevent the CPU from executing out of order, we need to use CPU fence. We can modify the compiler fence in functions f1 and f2 to CPU fence:

The disordered execution of instructions is mainly caused by two factors:

The above examples of inserting fence use GCC extension syntax. In fact, the C + + standard library has provided similar encapsulation: std::atomic_thread_fence [4], which is cross platform and better readable.