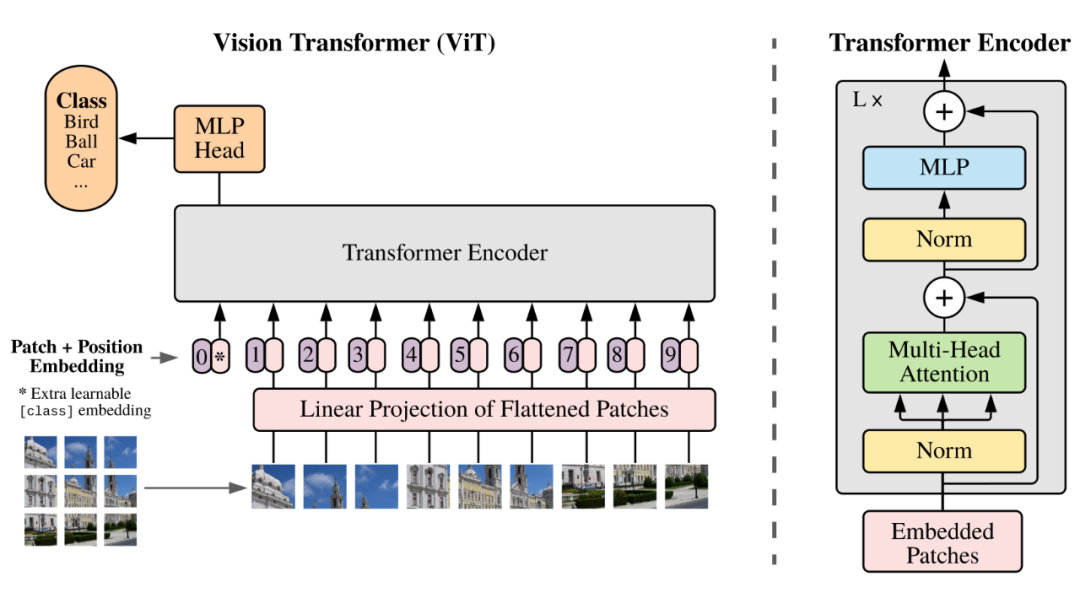 Transformer was originally used to do NLP work, so ViT's primary task is to convert the graph into word structure. The method adopted here is to divide the picture into small blocks, as shown in the lower left corner of the above figure. Each small block is equivalent to a word in the sentence. Here, each Patch is called a Patch, and Patch Embedding is to compress each Patch into a vector of a certain dimension through a fully connected network.

Here is the part about Patch Embedding in the VisionTransformer source code:

And embedded_ Layer is actually PatchEmbed:

Although proj uses convolution, it actually connects each patch to the same fully connected network and converts each patch into a vector. The dimension of x is (B, C, H, w), where B is batch size, C is usually three channels, H and W are the height and width of the picture respectively, while the output is (B, N, e), B is still batch size, n is the number of patches after each graph is cut into patches, and E is embedded_ Size, each patch will be converted into a vector through a fully connected network. E is the length of this vector. According to the principle of convolution, it can also be understood as the number of features of each patch. 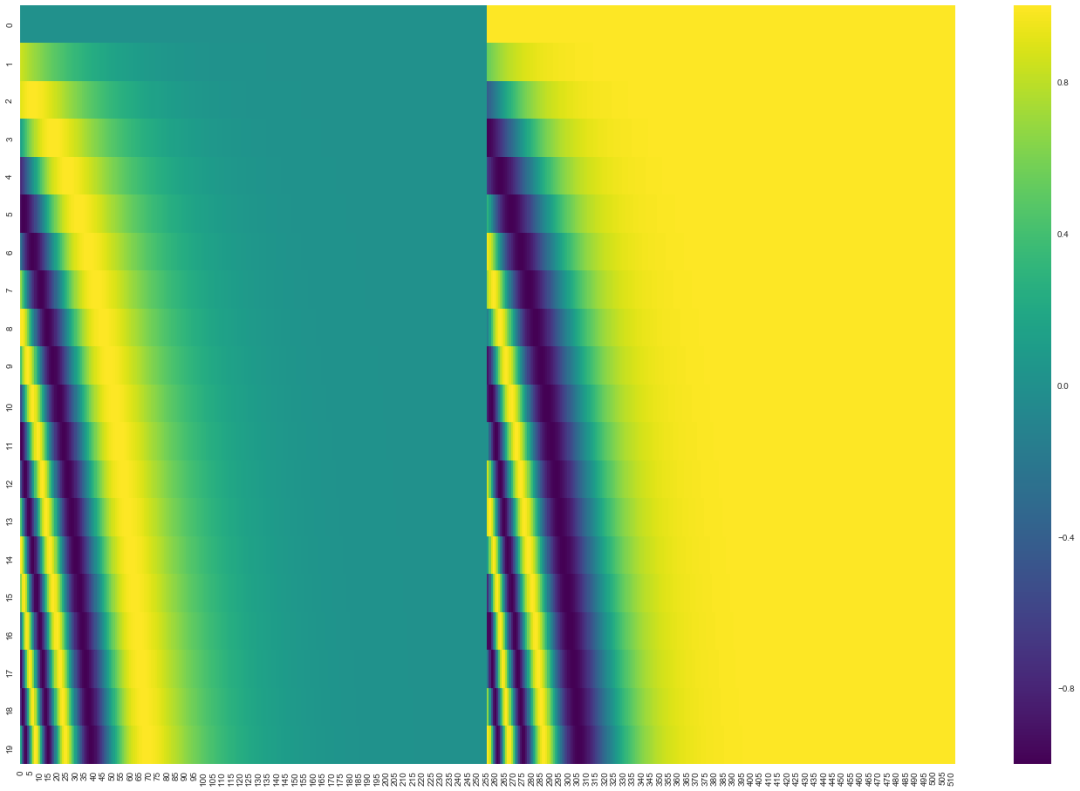 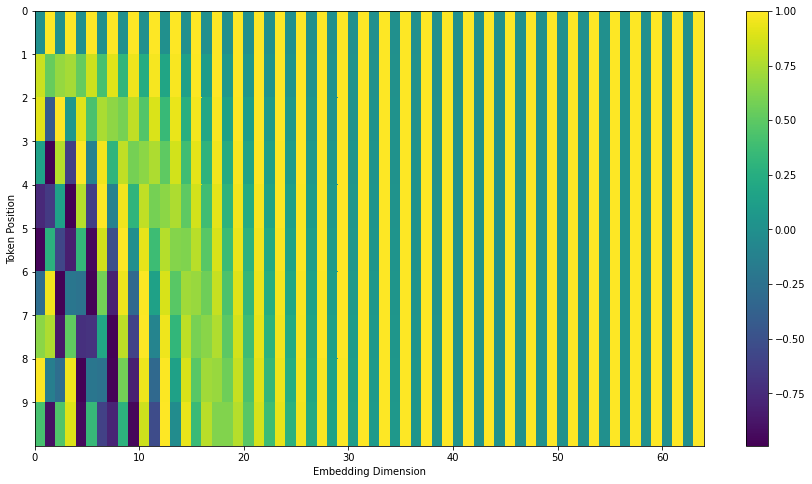 The formula is as follows:

pos is the position of the word in the sentence or the position of the patch in the figure, while i corresponds to the position of embedding, and dmodel corresponds to the length of patch embedding,. Here's why we need to add this location code and what effect it will have in the future. When we observe the last two pictures, we can find that the location code changes with the location. The greater the location difference, the greater the vector difference. In the NLP course, it is said that converting a word into a vector is like mapping a word to the position of a high-dimensional space. Words with similar meanings will be closer in the high-dimensional space. Adding a position vector will make words with similar positions closer and words with far positions farther away. Then, why use cos and sin? The author's explanation is that the relative position between words can be obtained by using sin and cos coding.

Here I understand that according to these two formulas, when we know sin(pos+k), cos(pos+k), and then sin(pos) and cos(pos), we can calculate the value of K, and we can calculate it by addition, subtraction, multiplication and division. Therefore, this coding method can not only express the position of words, but also express the relative position between words.

Let's look at the implementation of positive encoding in timm: 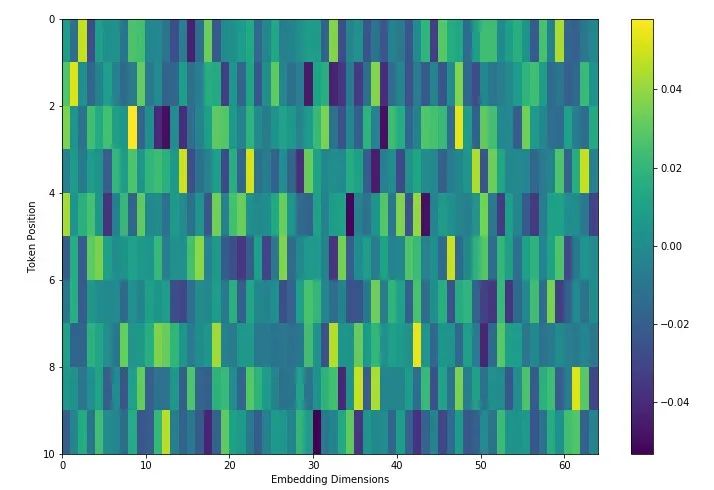 It can be found that the positive encoding in timm is a random number, that is, the positive encoding is not done. It may just leave you a position, and the default value follows a positive distribution and is limited to a small value range. There is no code and detailed explanation here. As for why it is a random number here. One is to reserve the position so that you can expand it. The other is that there are two ways to realize positive encoding: one is generated by a certain algorithm, and the other is obtained through training and adjustment. timm should be adjusted by training by default.

"The animal didn't cross the street because it was too tired."

It is easy for us to understand that the latter it refers to animal, but how can machines associate it with animal? 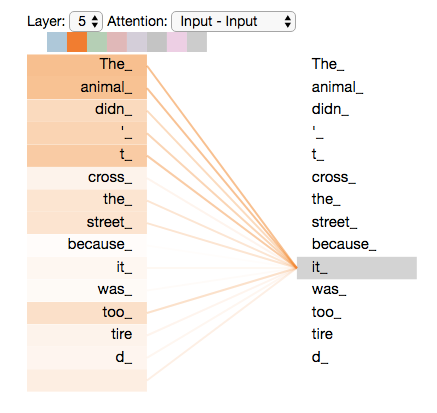 Let's look at the specific implementation: 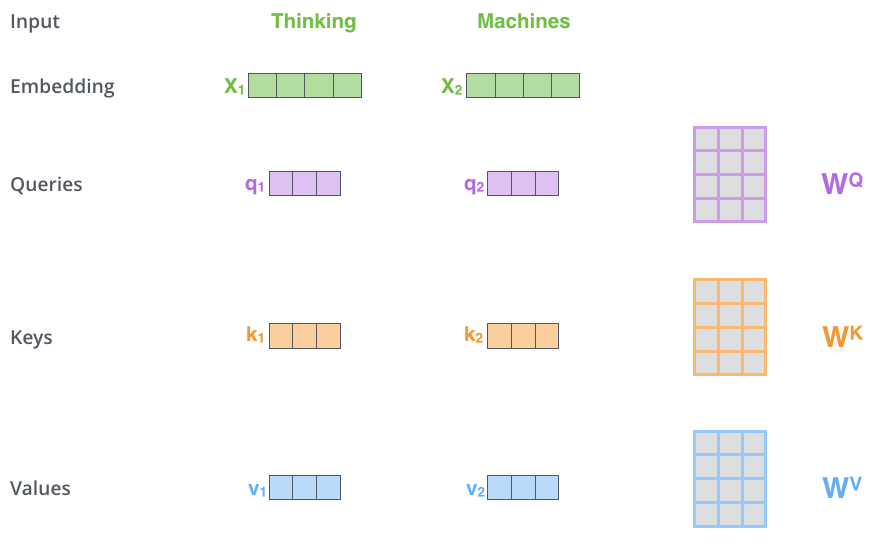 2. Self attention is generated by query vector and key vector. 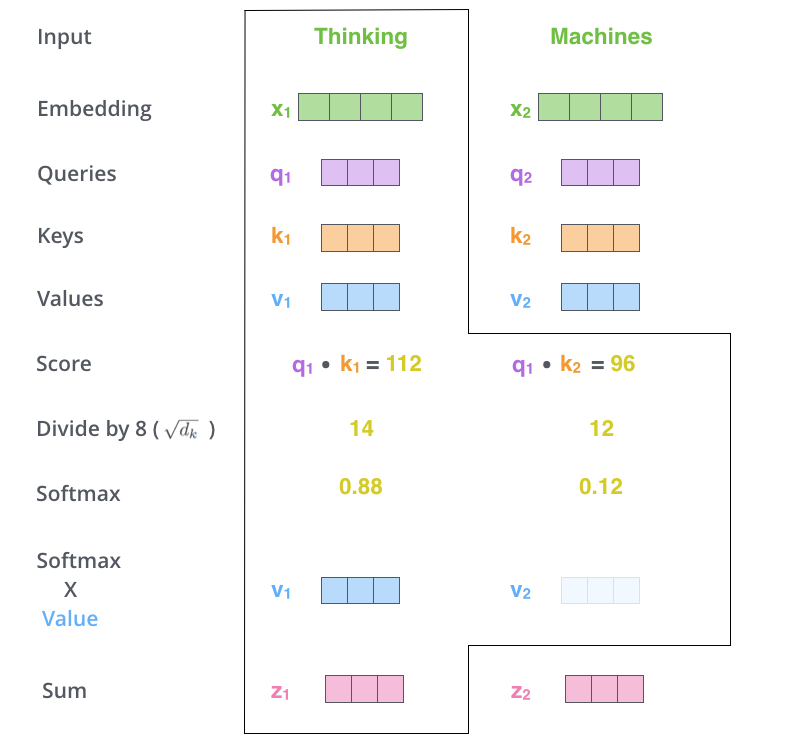 Thinking and Machine can be understood as two patch es in which the picture is segmented. Now calculate the self attention of thinking by multiplying q by k and dividing by a certain coefficient (the result value obtained from the scaled dot product attention is usually large, so that the softmax result can not express the attention value well. At this time, dividing by a scaling factor can alleviate this situation to a certain extent), After passing softmax, you will get an attention vector about thinking. For example, this example is [0.88, 0.12]. This vector means that to explain the meaning of the word thinking in this sentence, you should take 0.88 original meaning of thinking and 0.12 original meaning of Machine, which is the meaning of thinking in this sentence. Finally, the result after Sum in the figure expresses the meaning of each word in this sentence. The whole process can be expressed in the following figure:

In timm, attention is an improved multi head attention based on self attention, that is, when generating q, k and v, q, k and v are segmented and divided into num_heads, perform self attention operation on each copy respectively, and finally splice them together. In this way, parameter isolation is carried out to a certain extent. As for why the effect is better, I think this operation will concentrate the associated features and make it easier to train. 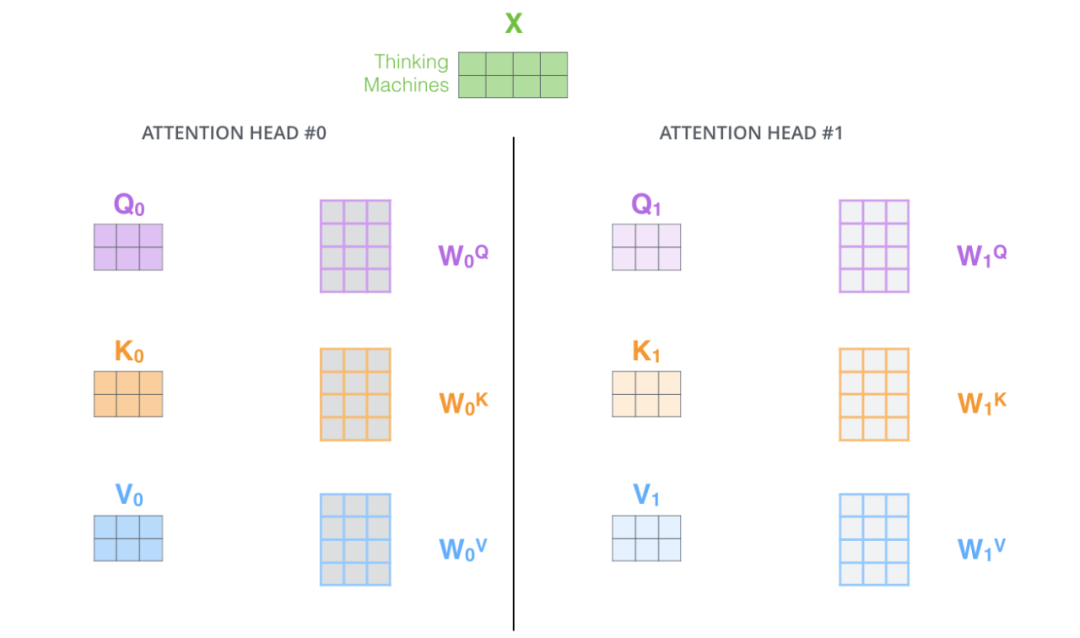 The general diagram of multi head attention is as follows: 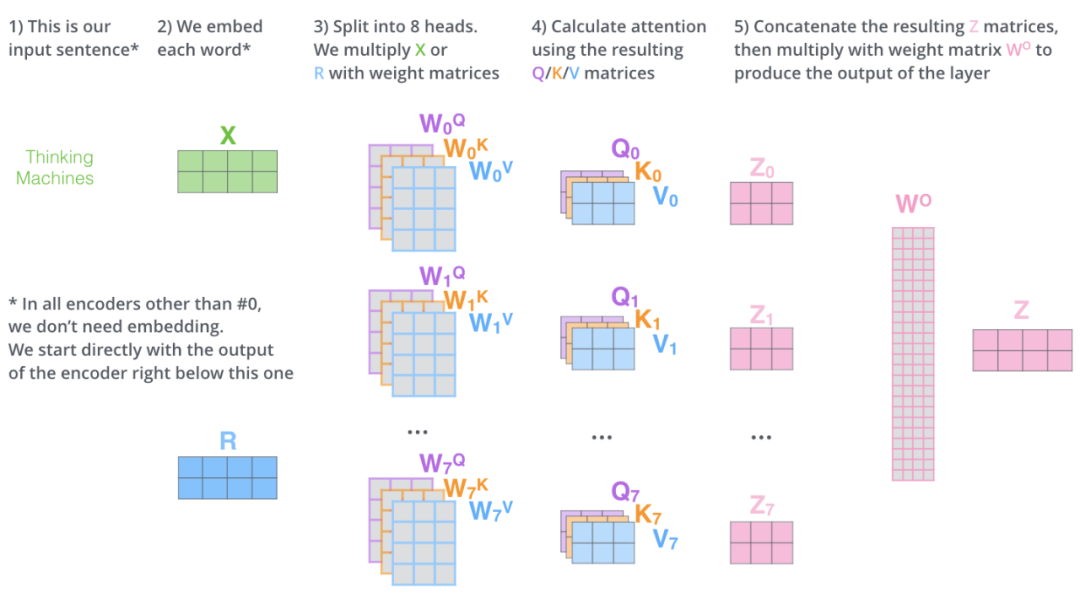 For ease of understanding, here is the sample code posted to LN on the official website: 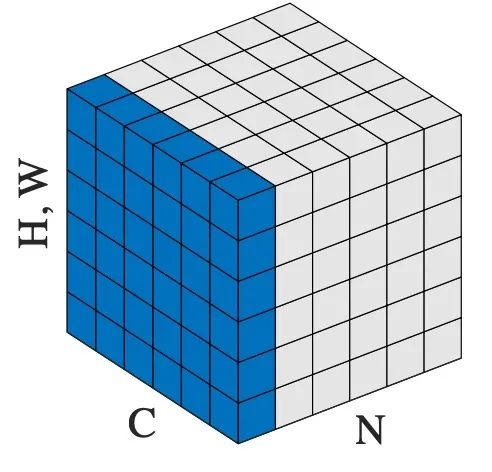 In ViT, although ln processes picture data, before LN, the picture has been cut into patches, and each Patch represents a word. Therefore, it is using semantic logic to solve visual problems. Therefore, LN is also used according to semantic logic in ViT. For details of this concept, please refer to [3] and [2].

Dropout is the earliest method used to solve network over fitting and the ancestor of all drop methods. The schematic diagram of the method is as follows: 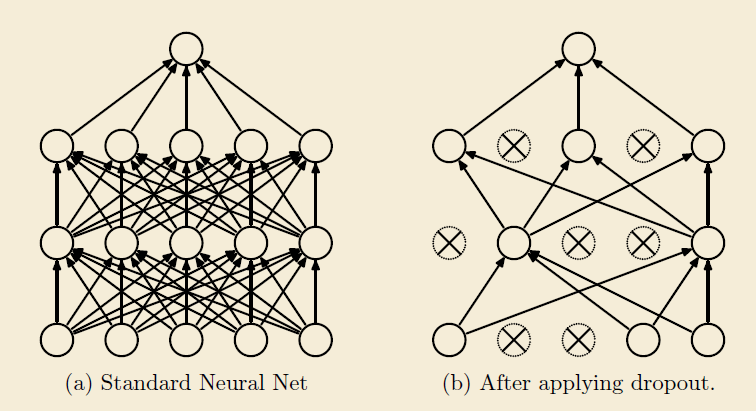 When propagating forward, let the neuron stop working with a certain probability. This can strengthen the generalization ability of the model, because neurons will fail with a certain probability, and such a mechanism will make the results not too dependent on individual neurons. Training phase to keep_prob probability makes neurons fail, and the validity of all neurons will be preserved during reasoning. Therefore, the reasoning result of neurons with dropout added during training should be multiplied by keep_prob.

Next, use the idea of dropout to understand the drop path. If the schematic diagram of drop path is not found, look directly at the code on timm:

As can be seen from the code, drop path is to change some layers into 0 at random in the dimension of batch to speed up the operation. 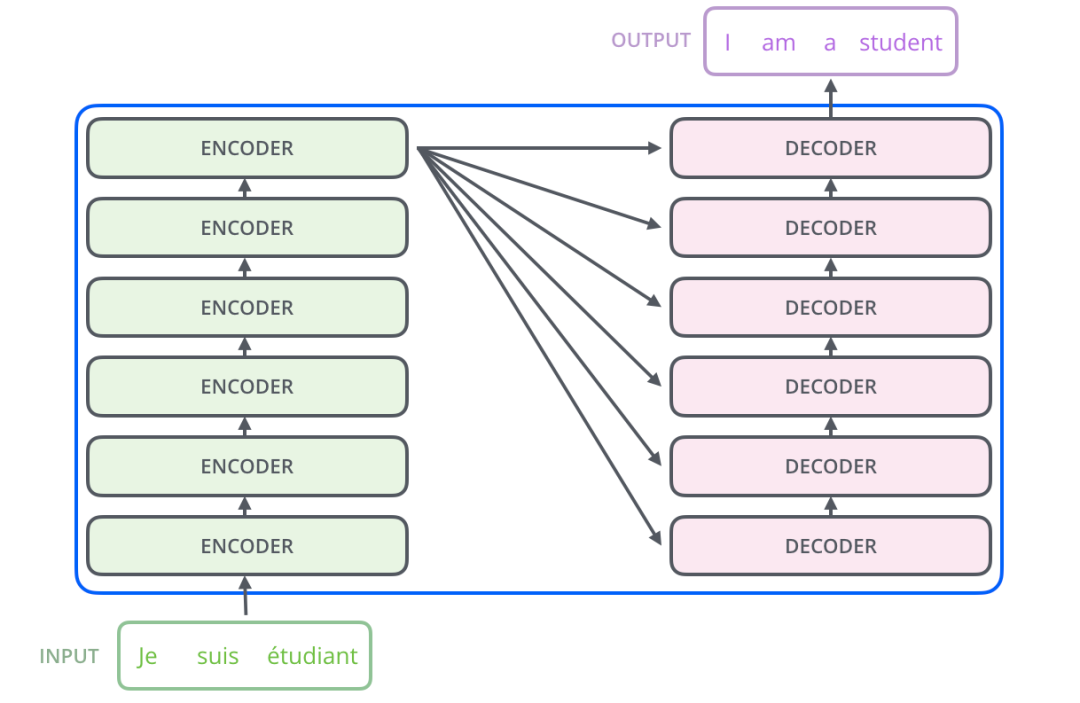 The Transformer is formed by a pile of encoders and decoder s. The general architecture diagram of the encoder is as follows: 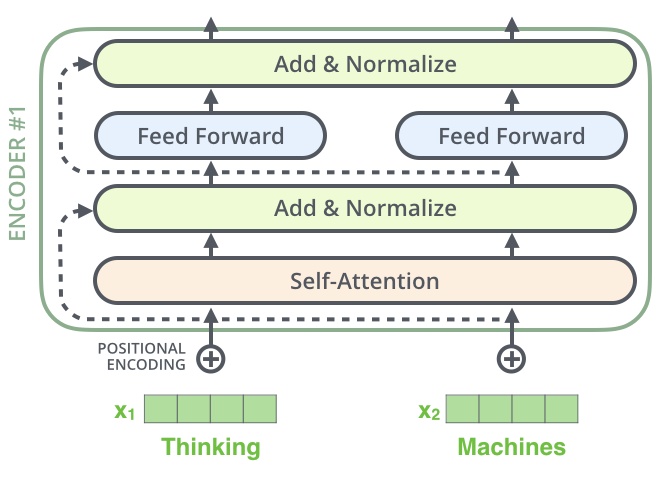 In ViT, such blocks have several layers to form blocks:

If drop_path_ If the rate is greater than 0, the drop of each layer block_ Path increases linearly. Depth is the number of blocks in a block. It can also be understood as the depth of the network block blocks.

This is the general process of the model: forward features - > final output

In this way, ViT is finished for me. DeiT involves many new concepts. Later, we will refer to the code for detailed explanation. 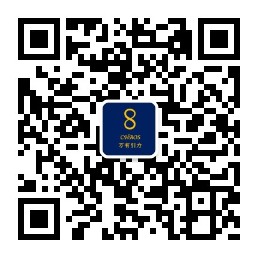