When we construct a ReentrantLock object, we can specify a fair lock or an unfair lock by passing in a Boolean value. After entering the source code, we can find that new has different sync objects

Click on the source code of FairSync or NonfairSync. In fact, they indirectly inherit the AbstractQueuedSynchronizer class, which provides a template method for our lock unlocking process, so let's learn about it first

AQS mainly constructs a first in, first out two-way queue. Put the thread that failed to grab the lock into the queue and block the thread. Wake up the thread after the lock is released. Let's take a look at the internal structure of AQS (only those used in ReentrantLock are shown)

After understanding the basic structure of AQS, in fact, we can guess about it first

Lock: CAS the state variable. If it fails, create a new node object and put it behind the head. Then you can't get the lock and have nothing to do. Then shut down and block the thread to prevent the cpu from idling
Unlock: CAS is also performed on the state variable, and then other threads are notified to grab the lock. The most important thing is to wake up the previously blocked thread, and then a thread regains the lock, and the cycle starts again

ok, enter the source code to verify our guess

Try CAS directly above. If it succeeds, set the thread occupying the lock to itself. If it fails to lock, enter the acquire method

First, let's take a look at what is done in the tryAcquire method. Click in and you will find that the final implementation is the nonfairTryAcquire method

You can find that tryAcquire does two things: 1. Try to lock again. 2. Whether the person holding the lock is himself. If return
If true, the method ends directly. If reture
If false, acquirequeueueueued (addwaiter (node. Exclusive), Arg) will be entered,

Then the next step is to go to the acquirequeueueueueued method

First, let's take a look at the shouldParkAfterFailedAcquire method

It can be found that the shouldParkAfterFailedAcquire method is used to ensure that the state of the prev node of the current node node must be SIGNAL. When this condition is met, the parkAndCheckInterrupt method will be executed, otherwise it will enter the next dead cycle until it is guaranteed
The state of the prev node is SIGNAL, because only when the prev node is SIGNAL, the next node will wake up and the current node will dare to suspend itself,

Then let's look at the parkAndCheckInterrupt method

How does fairness lock achieve fairness?
Let's look at the difference between the two source codes

The above is the tryAcquire method of fair lock. We can see that the difference between this method and non fair lock is only that there is an additional hasQueuedPredecessors() judgment method. Similarly, let's see what this method does first

From the enq method, you can see that the head is set before the tail, so case 1 does not exist

Then come to the next step

Case 2: at this time, other threads enter the enq method and have just executed compareAndSetHead(new Node()), but have not assigned a value to tail. At this time (s= h.next) == null is true, and directly exit the loop. At this time, it indicates that a thread with higher priority is executing a task
Case 3: the queue has been initialized successfully. At this time (s= h.next) == null is false, and then judge whether the current node is the next node of the head node. Please note that s = h.next has been assigned before. If s.thread= Thread. Currentthread() indicates that the current node is not the second node, so exit the loop and queue up

Did you find that the judgment of (s = h.next) == null is actually to distinguish case 1 and case 2 above, but it is too concise to understand

To sum up, the implementation of fair lock is to judge whether there are high priority threads through the hasQueuedPredecessors method, rather than directly grabbing the lock like an unfair lock

Prompt everyone that both non fair locks and fair locks operate before the thread does not enter the queue, but as long as it enters the queue, it must queue obediently

The process of the release method is basically to operate on the state, and then wake up the next node if there is a next node in the queue

Let's see how to wake up the next thread

Here's a question. Why should the queue be traversed from back to front?
Since it is written like this, it must be because if there will be some problems in traversal from front to back, what problems will there be?
We assume that there is such a scenario

Now there are three threads a, B and C executing tasks
Thread A is currently at the end of the task queue, that is, the tail node
1. At this time, thread B executes compareAndSetTail(t, node) in enq method queued, but t.next=node has not been executed yet,
2. Thread C executes compareAndSetTail(t, node) and t.next = node; What happens at this time? 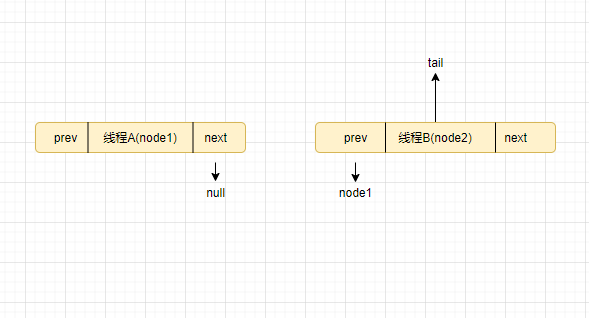 At this time, the cpu time slice is allocated to thread C. thread C starts to execute the queued task and executes t.next = node. The queue at this time is like this

Have you found it? At this time, the next of node1 node is still null, so in this case, if you traverse from front to back, the queue will be broken,
You can see that the prev of each node can find the node, so you need to traverse from back to front

I hope you can point out any misunderstandings. If you have any questions, please discuss them together~