It can be seen from the previous article. volatile keyword and synchronize keyword can help us solve the problem of data security in concurrent programming. In the jdk's own package, some atomic class operations are also provided.

1, What is atomic operation?

Unsafe is a class under sun.misc package. It mainly provides some methods for performing low-level and unsafe operations, such as direct access to system memory resources, self-management of memory resources, etc. these methods have played a great role in improving Java operation efficiency and enhancing the operation ability of Java language underlying resources. However, the unsafe class enables the Java language to operate the memory space like the C language pointer, which undoubtedly increases the risk of pointer related problems in the program. Excessive and incorrect use of unsafe classes in programs will increase the probability of program errors and make Java, a safe language, no longer "safe". Therefore, the use of unsafe must be cautious. The unsafe class is a singleton implementation that provides a static method getUnsafe to obtain the unsafe instance. It is valid only when and only when the class calling the getUnsafe method is loaded by the boot class loader. Otherwise, a SecurityException exception is thrown. 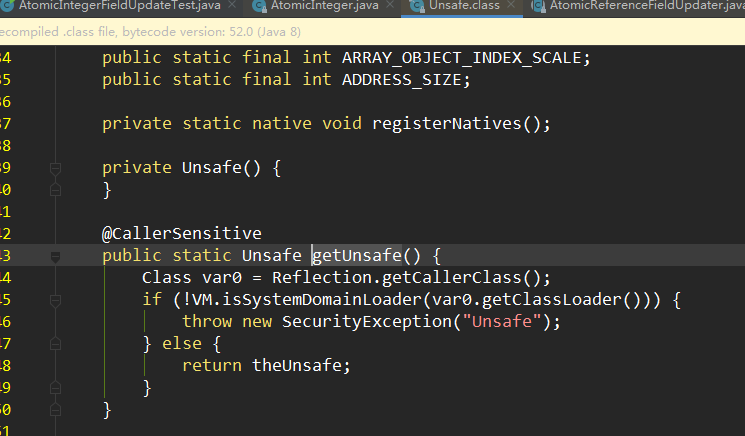 1. How to get Unsafe instances?

As shown in the following source code interpretation, this part mainly refers to the methods of CAS related operations.

Including thread suspension, recovery, locking mechanism and other methods.

These three class atoms store a variable value internally, and the visibility of data is guaranteed through volatile keyword modification. Then, it relies on Unsafe CAS method to ensure the correctness of concurrent modification, and then comprehensively uses volatile and Unsafe CAS method to return results, and uses loop to ensure thread safety and certain success of update.

Atomic classes of reference types also have three atomicreferences, AtomicStampedReference and AtomicMarkableReference. Mainly introduced by AtomicReference, the other two atomic classes are extensions of AtomicReference, but in fact, AtomicReference is the same as the basic atomic class, and I even think it can be classified as the basic class, Because like the basic class, it maintains a variable value, but the type is generic, that is, any type can be saved, and then the reference of value is compared to see whether it is consistent each time it is modified. Therefore, AtomicReference is equivalent to the extension of the basic type. It maintains all objects. It needs to verify the reference of value every time it is modified, and the basic type is to verify the specific value.

AtomicStampedReference is an upgrade of AtomicReference. Its implementation is to maintain a pair type variable modified by volatile. Pair stores the object to be maintained and an int type tag (just like the version number). Each update creates a new pair object. All modifications can be successful only if the object and tag are satisfied at the same time, Solve the ABA problem of CAS.
AtomicMarkableReference is similar to AtomicStampedReference, except that the representation maintained in the Pair class is boolean, which can be used to indicate that the object has been deleted.