Explain the virtual DOM and Diff algorithm in simple terms, and the differences between Vue2 and Vue3

How does it use JS objects to simulate DOM structure? Look at an example

The above template is transferred to the virtual DOM, which is the following

Such a DOM structure is called virtual DOM (Virtual Node), or vnode for short.

Its expression is to turn each tag into an object, which can have three attributes: tag, props and children

Why use virtual DOM? Look at a picture

As shown in the figure, the native DOM has many properties and events, and even creating an empty div costs a lot. The point of using virtual DOM to improve performance is to calculate the DOM to be changed by comparing the diff algorithm with the DOM before data change, and then only operate on the changed DOM instead of updating the whole view

How to convert DOM into virtual DOM in Vue? If you are interested, you can follow my another article to learn more about the template compilation process and principle in Vue

In Vue, the data update mechanism of virtual DOM adopts asynchronous update queue, which is to load the changed data into an asynchronous queue of data update, that is, patch, which is used to compare new and old vnode s

Diff algorithm is called patch in Vue, and its core is reference Snabbdom , through the comparison between the old and new virtual DOM (i.e. patch process), find out the place with the smallest change and switch to DOM operation

extend
In Vue1, there is no patch. Each dependency has a separate Watcher to update. When the project scale becomes larger, the performance can't keep up. Therefore, in Vue2, in order to improve the performance, there is only one Watcher for each component. How can we accurately find the location of the change in the component when we need to update? So patch it's coming

So when did it execute?

When the page is rendered for the first time, the patch will be called and a new vnode will be created without deeper comparison

Then, when the data in the component changes, the setter will be triggered, and then Notify the watcher through Notify. The corresponding Watcher will Notify the update and execute the update function. It will execute the render function to obtain the new virtual DOM, and then execute the patch to compare the old virtual dom of the last rendering result and calculate the minimum change, Then update the real DOM, that is, the view, according to this minimum change

So how is it calculated? Look at a picture first 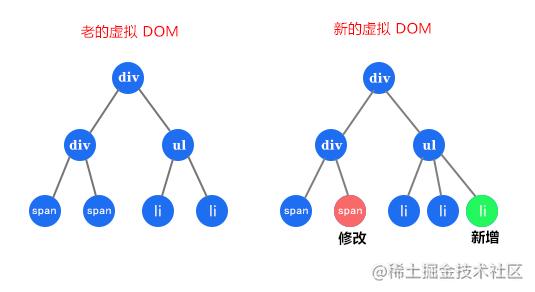 For example, with a DOM structure like the one shown above, how do you calculate the change? Simply put

But this will have a big problem. If there are 1000 nodes, you need to calculate 1000 ³ Times, that is, 1 billion times, which is unacceptable. Therefore, when using the Diff algorithm in Vue or React, it follows the depth first strategy and makes some optimization based on the same layer comparison strategy to calculate the minimum change

1. Compare only the same level, not cross level

As shown in the figure, the Diff process will only compare the DOM of the same level framed with the same color, so as to simplify the comparison times. This is the first aspect 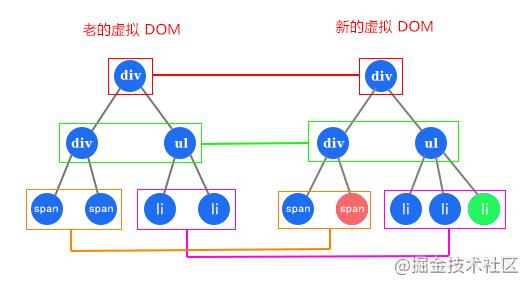 If the comparison tag names of the same level are different, the nodes corresponding to the old virtual DOM will be removed directly, and the depth comparison will not continue according to the tree structure. This is the second aspect of simplifying the number of comparisons

If the tag names are the same and the keys are the same, it will be considered as the same node, and we will not continue to make depth comparison according to this tree structure. For example, when we write v-for, we will compare the keys, and if we do not write the key, an error will be reported, which is because the Diff algorithm needs to compare the keys

There is a very common question in the interview, which is to let you talk about the role of key. In fact, it tests everyone's mastery of the details of virtual DOM and patch, which can reflect the understanding level of our interviewers, so here's an extension of key

For example, there is a list. We need to insert an element in the middle. What will happen? Look at a picture first 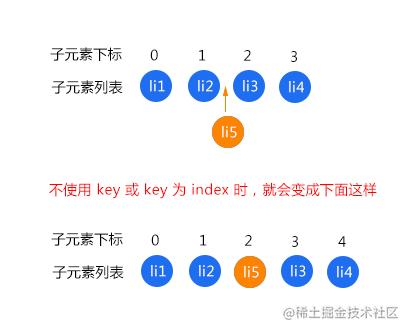 When we do not use the key or the index of the list as the key, the corresponding location relationship of each element is index. The results in the above figure directly lead to the change of the corresponding location relationship from the inserted element to all the subsequent elements, so all the elements will be updated, which is not what we want, What we want is to render the added element, and do not re render the other four elements without making any changes 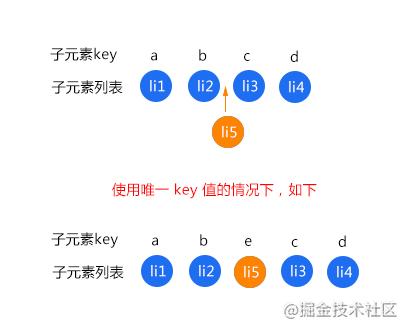 In this way, li3 and li4 in the figure will not be re rendered, because the element content has not changed and the corresponding positional relationship has not changed.

This is why v-for must write a key, and it is not recommended to use the index of the array as the key in development

If you are interested, you can take a look at the source code: SRC \ core \ vdom \ patch.js - line 35 sameVnode(), which is also described in detail below

The Diff algorithm is mentioned above. In Vue, it is a patch, which paves the way. Let's go to the source code to see what this amazing patch has done?

It can receive four parameters, mainly the first two

The main process is as follows:

Let's look at the complete patch function source code, which shows that I have written it in the comments

This function is not long. Just look at the source code

This function is only executed when the new vnode and oldVnode are the same node. It is mainly used to compare the changes of node text or child nodes

Let's first introduce the main process and then look at the source code. The process is as follows:

Here is the key, the key!

For example, there are two child node lists for comparison. The main comparison process is as follows

Loop through two lists. The loop stop condition is that the start pointer startIdx and end pointer endIdx of one list coincide

The contents of the cycle are:{

As long as one of the above four judgments is equal, call patchVnode to compare the changes of node text or child nodes, and then move the subscript of the comparison to continue the next round of circular comparison

If the above four situations fail to hit, keep taking the key of the new start node to the old children

Why is there head to tail and tail to head operation?

So far, the core logic source code of the whole Diff process is over. Let's take a look at the changes made in Vue 3

The source code version of this article is Vue2. The Diff algorithm is rewritten in Vue3. Therefore, the source code is basically different, but the things to be done are the same

The full Diff source code analysis of Vue3 is still being written and will be released in a few days. First, let's introduce the optimization compared with Vue2. The data released by Youda is that the update performance has been improved by 1.3 ~ 2 times and the ssr performance has been improved by 2 ~ 3 times. Let's see what optimizations are available

Let's look at the results after Vue3 is compiled

Note that onClick will read the cache first. If there is no cache, it will store the incoming events in the cache, which can be understood as becoming a static node. Excellent, but there is no cache in Vue2, which is dynamic

What are static tags?

What's the use of static tags? Look at a picture

Where is it used? For example, the following code

As a result of compiling in Vue2, those interested can install Vue template compiler and test by themselves

See - 1 and 1 in the above compilation results? These are static tags, which are not available in Vue2. This tag will be judged in the patch process to Diff optimize the process and skip some static node comparison

In fact, take the example of Vue2 and Vue3 static tags above. In Vue2, whenever an update is triggered, no matter whether the element participates in the update or not, it will be recreated every time, which is the following pile

In Vue3, the element that does not participate in the update will be saved, created only once, and then reused every time it is rendered. For example, in the above example, it will be created and saved statically

Then, each time the age is updated, only the dynamic content is created and the static content saved above is reused

In Vue2, updateChildren will update

Take an example, for example

If this article is of little help to you, please give me a praise and support. Thank you