This article mainly explains the above two steps. The following code is written with reference to the source code of Baidu course and YOLOV5.

Just want to understand the concept, just look at the front. The second part is mainly the code.

Before introducing the following contents, let's briefly introduce some basic concepts. The anchor box and prediction box are easy to be confused in the future. Please pay more attention. 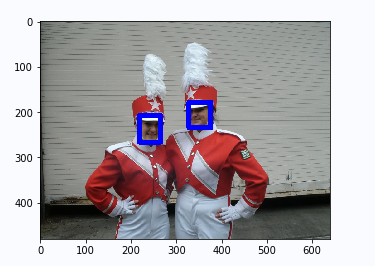 The bounding box mainly has the following two forms.

That is, the bounding box is represented by the central coordinates (x, y) and the length and width (w, h) of the box. This form is mainly used in YOLO.

When we train, we also call the boundary box ground   true box

Anchor frame is different from object boundary frame. It is a kind of frame imagined by people. First set the size and shape of the anchor box, and then draw a rectangular box centered on a point on the image.

In YOLO, the generation rule is to divide the picture into mxn areas, and then generate a series of anchor boxes in the center of each grid according to the set aspect ratio.

Here, the set length and width are generated by clustering in YOLO, while in yoov5, they are calculated by k-means clustering + genetic algorithm and updated later. 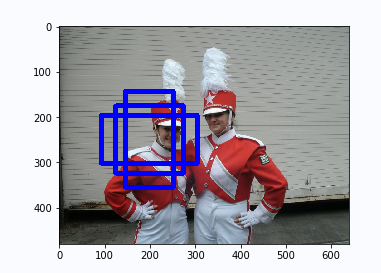 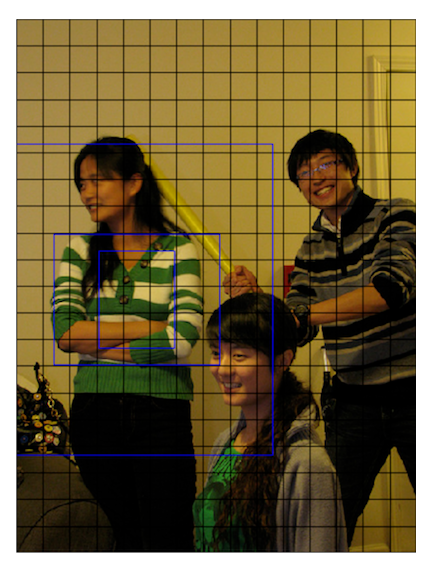 In the target detection task, a series of anchor boxes are usually generated on the image according to some rules, and these anchor boxes are regarded as possible candidate areas. The model predicts whether these candidate regions contain objects. If they contain target objects, it needs to further predict the category of objects. Another more important point is that because the anchor frame position is fixed, it is unlikely to coincide with the object boundary frame. Therefore, fine adjustment needs to be made on the basis of the anchor frame to form a prediction frame that can accurately describe the object position. The model needs to predict the fine adjustment range.

Simply put, the anchor box is equivalent to the initialization weight of the network for the prediction box.

According to the generation method of anchor box, it is generated with a certain length width ratio based on the central coordinate of a divided grid, but in YOLO, the prediction box is offset with the upper left corner coordinate of a grid as the origin. 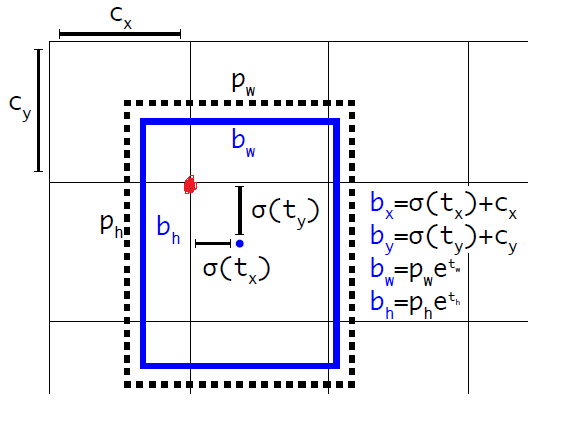 The coordinates of the upper left corner of the grid in the figure are (cx, cy)  ， Then the center coordinate in the prediction box is (bx, by), where

From the sigmoid function, we can see that its function value is between (0, 1), and the central coordinates of bx and by must be in this divided lattice.

From the above formula, we can know that our network is actually predicting the values of tx, ty, th and tw. Since we know the bx, by, bh, bw of the real box, it is easy to know the real box tx *, ty *, th *, TW * from the inverse function, then one of the boundary boxes of our network loss is calculated as tx, ty, th, TW and tx *, ty *, th *, TW *, and the loss will be described in detail next time.

Let's briefly explain why we use this method to get bx, by, bh and bw. In fact, sigmoid and e-exponential functions are mainly used, which have no constraints on the output of the network. 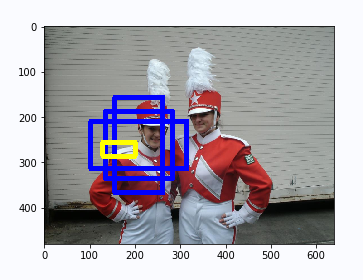 Here are many concepts about anchor box and prediction box. Please pay attention to the difference!

Each anchor box may be a candidate area, but we know from the above content that a picture will generate many anchor boxes. How to determine which one we need, we mainly consider the following three aspects.

We mainly use IOU or GIOU and other indicators to judge whether the anchor box contains objects. For IOU and GIOU, you can see my following article. In the following explanations, I use IOU as the index to evaluate the objectness tag.

We can calculate the IOU between all our anchor boxes and real boxes, and then select n anchor boxes (n is the number of real boxes) according to the evaluation index IOU

However, in YOLO, for some anchor boxes with large IOU, set a threshold. If the IOU is greater than this threshold, mark the objectness tag as - 1 instead of 0

In the prediction, we only need to predict the location tag and label tag according to the anchor box with objectness tag 1!!

For the label label, we use one hot coding. For example, if there are four categories, it will be marked as [0, 0, 0, 1] (assuming that it is the fourth category)

From this, we can see that for the annotation of candidate boxes, we need a total of 1 (object tag) + 4 (location tag) + n (number of categories - label tag) parameters.

Our network also has so many parameters for each prediction frame!! This is very important for understanding the network output later!!

For how to generate the anchor box, the functions marked with the candidate box are as follows. The code is relatively long and the comments I have written are relatively complete. After reading them step by step, I will have a deeper understanding of the above contents.

There are many concepts involved, and based on my own understanding, if there is any error, welcome to discuss and correct.