This is the classic example of parallel search set, and the entry level. If you want to learn this data structure, you must learn this foundation well. You can recite the template. The title source is HDU 1232, and the specific link is: http://acm.hdu.edu.cn/showproblem.php?pid=1232.

A province investigates the urban traffic conditions and obtains the statistical table of existing urban roads, which lists the cities and towns directly connected by each road. The goal of the provincial government's "unblocked project" is to enable any two cities and towns in the province to realize traffic (but there is not necessarily a direct road connection, as long as they can reach each other indirectly through the road). How many roads need to be built at least?

The test input contains several test cases. The first line of each test case gives two positive integers, namely, the number of towns N (< 1000) and the number of roads M; The subsequent M lines correspond to M roads, and each line gives a pair of positive integers, which are the numbers of the two towns directly connected by the road. For simplicity, towns are numbered from 1 to N.
Note: there can be multiple roads between the two cities, that is to say

This input is also legal
When N is 0, the input ends and the use case is not processed.

For each test case, output the minimum number of roads to be built in one line.

This problem needs to calculate the minimum number of roads between any two towns in the province. Each town in the province can be regarded as a node, and the road between each town can be regarded as a line connecting two nodes. The schematic diagram of the four groups of data given in Sample Input is as follows. Node 2 and the other three nodes in the first example have no connected roads. Therefore, to achieve the goal of traffic between any two cities and towns in the province, at least one road needs to be established; In the second example, there are only 3 nodes, which are connected to each other to form a loop, and the minimum number of road establishment is 0; In the third example, node 4 exists independently, nodes 1 and 2 are connected with each other, and nodes 3 and 5 are connected with each other. To achieve the goal, node 4 and two other groups of node groups need to be connected, and two roads are required; In the last example, the number of cities and towns is 999 and the number of roads is 0, so it is equivalent to 999 independent nodes. All connections and interworking require the construction of 998 roads. 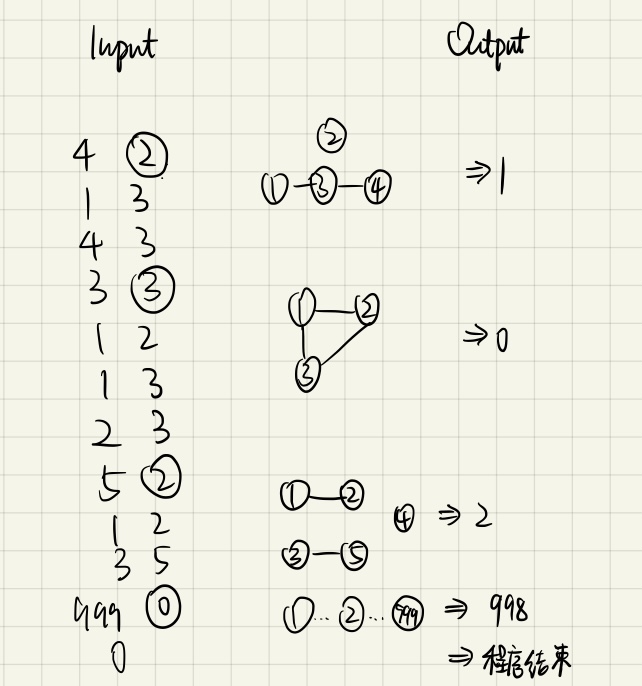 Both can be AC