Previously, we learned the text compressor based on LZW algorithm, which is based on the repetition of substrings in the text. Huffman coding is another text compression algorithm, which is based on the relative frequency of different symbols in a text. Suppose a text is a string composed of characters a, u, x and z, its length is 1000, each character is stored in 1 byte, and a total of 1000 bytes (i.e. 8000 bits) are required. If each character is represented by 2-bit binary, 1000 characters can be represented by 2000 bit space. In addition, we also need a certain space to store the code table, which can adopt the following storage format:

Using the above encoding method, the encoding of the string aaxuaxz is 0000011000111. Because the code of each character occupies 2 bits. Therefore, from left to right, 2 digits are extracted from the code each time, and the original string can be obtained by compiling the code table.

In the string aaxuaxz, a appears three times. The number of times a symbol appears is called frequency. The frequency of symbols a, u, X and Z in this string is 3, 2, 1 and 1 respectively. When the frequency of different characters is very different, we can shorten the length of the coding string by variable length coding. If coding is used. If the code (0=a, 10=x, 110=u, 111=z) is used, the code of the symbol string is 00101100111, and the length of the code string is 13 bits, which is slightly shorter than the original 14 bits. When the occurrence frequency of different characters is more different, the length difference of coding string will be more obvious.

So how to decode it? The encoding of the string aaxuaxz is 00101100111. When decoding from left to right, we need to know whether the code of the first character is 0, 00 or 001. Because no code of a character starts with 00, the code of the first character must be 0. According to the encoding table, the character is a. The next code is 0, 01 or 010. Similarly, because there is no code starting with 01, the code must be 0. Continue to use this method to decode. This decoding can be realized because no code is the prefix of another code. 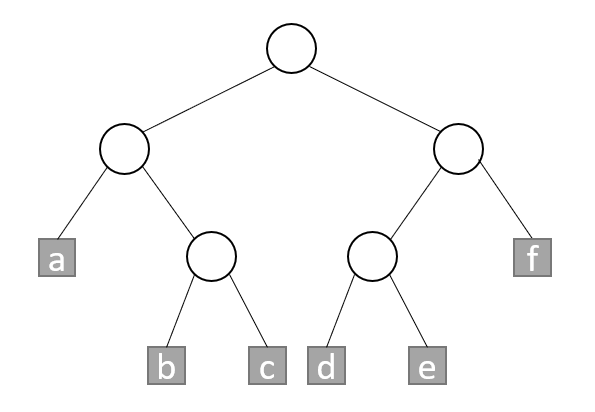 To encode a string with Huffman encoding, you need to do the following:
① Determines the symbols of strings and how often they appear
② A Huffman tree is established, in which the external node is represented by the symbol in the string, and the weight of the external node is represented by the frequency of the corresponding symbol.
③ Traverse the path from the root to the external node to get the code of each symbol.
④ Replace symbols in strings with code.
In order to facilitate decoding, it is necessary to save the mapping table from symbol to code or the frequency table of each symbol. If the frequency table of symbols is saved, the Huffman tree can be reconstructed by using ②.

The process of constructing Hoffman input is: first, a set of binary trees is established. Each binary tree contains only one external node. Each external node represents a symbol of the string, and its weight is equal to the frequency of the symbol. Then, continuously select two binary trees with the least weight from the set, merge them into a new binary tree, add a root node in the merging method, and take the two binary trees as the left and right subtrees respectively. The weight of the new binary tree is the sum of the weights of the two subtrees. This process continues until there is only one binary tree left. 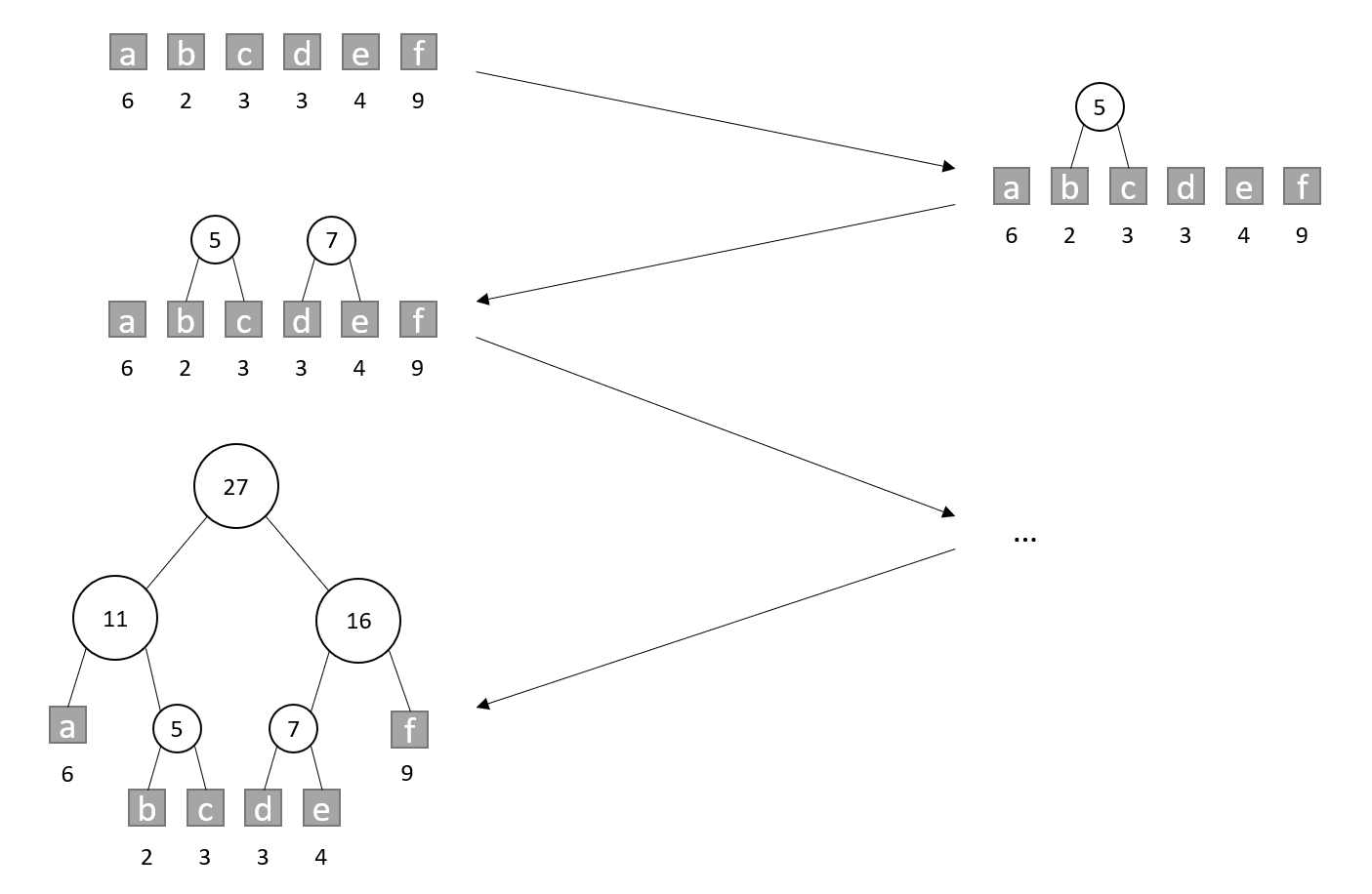 After careful analysis, it is not difficult to analyze. Whether it is compression or decompression, the construction process of the tree is exactly the same. The process of generating code mapping relationship between them is also recursive, but the mapping relationship is relative (from character to coding and from coding to character). Therefore, we provide base classes to handle these same operations.

In addition, we choose to use the FileReader and FileWriter previously implemented to handle file reading and writing. 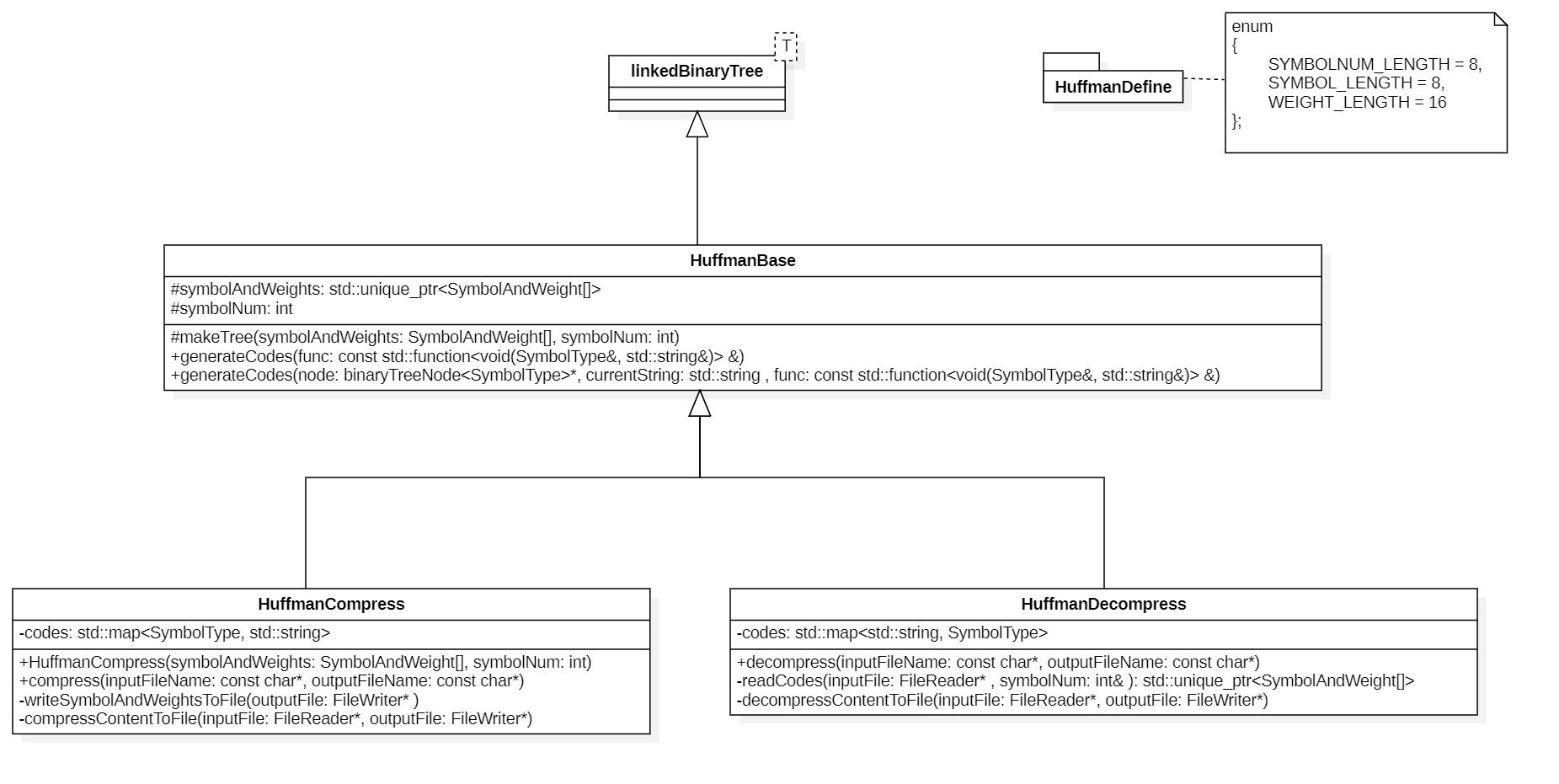 Here, the frequency of each code needs to be provided externally. We save the code and frequency in the file header to reconstruct the Huffman tree.

You should pay attention to the judgment method of reading the last character. Because we only read one bit at a time, we can't pass= EOF judgment. Fortunately, we provided the operator bool earlier to get the flow state.

FileReader has a small problem. When reading data from a file to fill the buffer and output, it uses the wrong length. Since the previous LZW code unfilledLength is 4 bits, that is, unfilledLength = fileBuffer.getMaxBufferSize() - unfilledLength, this problem does not occur.

Compared with Huffman coding and LZW coding, it is not difficult to find that they will be better if combined. Huffman coding pays more attention to the occurrence frequency of a single character, but ignores the repetition frequency of words (continuous characters); LZW encoding considers the occurrence of continuous characters and uses the same encoding method for them, but its encoding length completely depends on the order of string occurrence rather than frequency.

In addition, Hoffman coding has another problem: the implementation of the above compression rate comes from two scans of the file, which will lead to too long compression time.