54.1 separation and layering of linux drivers
54.1.1 separation and separation of drives
For a mature, large and complex operating system such as Linux, the reusability of code is very important. Otherwise, there will be a lot of meaningless duplicate code in the Linux kernel. Especially the driver, because the driver occupies a large part of the Linux kernel code. If the driver is not managed and the repeated code is arbitrarily increased, the number of files in the Linux kernel will be unacceptably large before long.
Suppose there are three platforms A, B and C, and the six axis sensors with the I2C interface MPU6050 are on these three platforms (the platform here refers to SOC). According to the idea when we write the bare metal I2C driver, each platform has A MPU6050 driver. Therefore, the simplest driver framework is shown in figure 54.1.1:

Figure 54.1.1.1 conventional I2C device driver
As can be seen from figure 54.1.1.1, there is a host driver and device driver under each platform. The host driver must be necessary. After all, different platforms have different I2C controllers. However, there is no need to write one device driver for each platform on the right, because MPU6050 is the same for that SOC. Just read and write data through I2C interface, and only one MPU6050 driver is required. If there are several I2C devices, such as AT24C02 and ft5206 (capacitive touch screen), the device driver will be written repeatedly several times according to the writing method in figure 54.1.1. Obviously, this writing method is not recommended in the Linux driver. The best way is to provide a unified interface (also known as host driver) for the I2C controller of each platform, and only one driver (device driver) for each device. Each device is accessed through the unified I2C interface driver, which can greatly simplify the driver file, For example, the MPU6050 driver framework under the three platforms in 54.1.1 can be simplified as shown in figure 54.1.1.2:
Insert picture description here

Figure 54.1.1.2 improved equipment drive
There must be many kinds of I2C driving devices, not just MPU6050. The actual driving architecture is shown in figure 54.1.1.3: 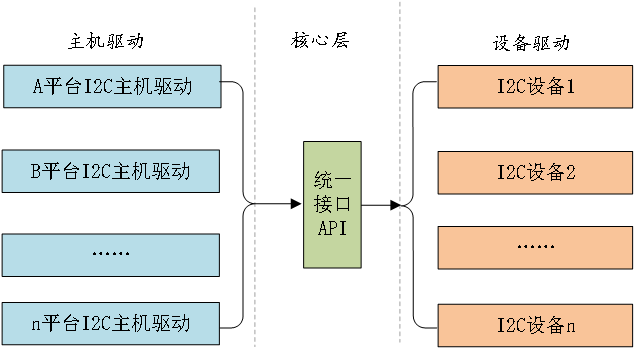 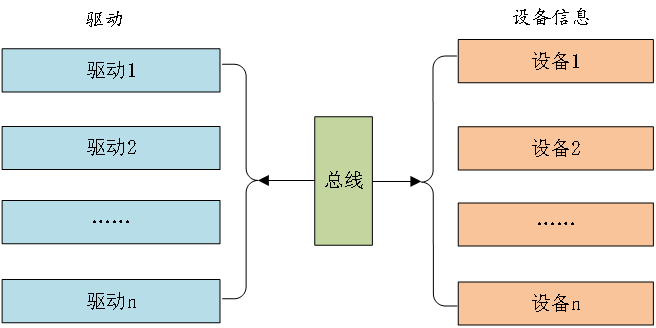 Figure 54.1.1.4 Linux bus, driver and device modes
When we register a driver with the system, the bus will look in the device on the right to see if there is a matching device, and if so, connect the two. Similarly, when registering a device with the system, the bus will look for a matching device in the driver on the left and connect it if any. A large number of drivers in the Linux kernel adopt bus, driver and device modes. The platform driver we will focus on later is the product of this idea.
54.1.2 driven layering
The previous section talked about the separation and separation of drivers. In this section, let's take a brief look at the layering of drivers. You should have heard of the 7-layer model of the network. Different layers are responsible for different contents. Similarly, drivers under Linux are often layered, and the purpose of layering is to deal with different contents in different layers. Take the input (input subsystem, which is often used in other books or materials, which will be explained in detail in a special chapter) as an example to briefly introduce the driver layering. The input subsystem is responsible for managing all input related drivers, including keyboard, mouse, touch, etc. the lowest layer is the original device driver, which is responsible for obtaining the original value of the input device and reporting the obtained input events to the input core layer. The input core layer handles various IO models and provides file_operations collection of operations. When writing the input device driver, we only need to handle the reporting of input events. As for how to deal with these reported input events, the upper level will consider it, and we don't care. It can be seen that the layered model can greatly simplify our driver writing, which is very friendly for driver writing.
54.2 introduction to platform driven model
Earlier, we talked about the separation of device drivers, and introduced bus, driver and device models, such as I2C, SPI, USB and other buses. However, some peripherals in SOC do not have the concept of bus, but what should we do if we use bus, driver and device model? In order to solve this problem, Linux puts forward the virtual bus platform, and the corresponding platform_driver and platform_device.
54.2.1 platform bus
Linux kernel uses bus_ The type structure represents the bus, which is defined in the file include/linux/device.h, bus_ The type structure is as follows:

platform_bus_type is the platform platform bus, where platform_match is the matching function. Let's take a look at how drivers and devices match, platform_ The match function is defined in the file drivers/base/platform.c. The contents of the function are as follows:

Line 2: probe function. After the driver and device are matched successfully, the probe function will be executed. It is a very important function!! Generally, the driver provider will write it. If he wants to write a new driver, the probe needs to implement it by himself.
Line 7, driver member, device_ The driver structure variable is widely used in the Linux kernel, such as object-oriented thinking and device_driver is equivalent to the base class and provides the most basic driving framework. plaform_driver inherits this base class, and then adds some unique member variables on this basis.
Line 8, id_table, which is the third method we used when explaining the platform bus matching driver and device in the previous section, id_table is a table (that is, an array), and the type of each element is platform_device_id，platform_ device_ The ID structure is as follows:

Line 10, of_match_table is the matching table used by the driver when using the device tree. It is also an array, and each matching item is of_device_id structure type, which is defined in the file include / Linux / mod_ In devicetable. H, the contents are as follows:

Lines 33-39, xxx_probe function. This function will be executed after the driver and device are matched successfully. All the character device drivers previously written in the init function of the driver entry will be placed in this probe function. For example, register character device drivers, add cdev, create classes, and so on.
Lines 41-47, xxx_remove function, platform_ The remove member variable in the driver structure. This function will be executed when the platform standby driver is closed. The previous work to be done in the driver uninstall exit function will be put into this function. For example, use iounmap to free memory, delete cdev, log off device number, and so on.
Lines 50-53, xxx_of_match matching table. If the device tree is used, the driver and device will be matched through this matching table. Line 51 sets a matching item. The compatible value of this matching item is "XXX GPIO". Therefore, when the compatible attribute value of the device node in the device tree is "XXX GPIO", this device will match this driver. Line 52 is a tag, of_ device_ The last match in the ID table must be empty.
Line 5865, define a platform_driver structure variable xxx_driver, which means platform driven, and the paltform is set in line 5962_ Device in driver_ Name and of of driver member variables_ match_ Table these two properties. The name attribute is used to match the traditional driver and device, that is, to check whether the name fields of the driver and device are the same. of_ match_ The table attribute is used for driver and device checking under the device tree. For a complete driver, two matching methods must be provided: device tree and no device tree. The last two lines 63 and 64 set the two member variables probe and remove.
Lines 68 to 71, drive the entry function and call platform_ driver_ The register function registers a platform driver with the Linux kernel, that is, XXX defined above_ Driver structure variable.
Lines 74 to 77, drive the exit function and call platform_ driver_ The unregister function unloads the previously registered platform driver.
Generally speaking, the platform driver is still a traditional character device driver, block device driver or network device driver, but it is covered with a "platform" skin. The purpose is to use the driving model of bus, driver and device to realize the separation and layering of drivers.
54.2.3 platform equipment
The platform driver is ready. We also need platform devices. Otherwise, a single driver can't do anything. platform_ The device structure represents the platform device. Here, we should note that if the kernel supports the device tree, we will not use the platform again_ Device is used to describe the device, because the device tree is used to describe it. Of course, if you have to use platform_device can also be used to describe device information. platform_ The device structure is defined in the file include / Linux / platform_ In device. H, the structure is as follows:

54.3 hardware schematic diagram analysis
In this chapter, we only use the LED lights on the IMX6U-ALPHA development board. Therefore, refer to section 8.3 for the schematic diagram of the experimental hardware.
54.4 preparation of test procedure
The routine path corresponding to this experiment is: development board CD - > 2. Linux driver routine - > 17_platform.
In this chapter, we need to write a driver module and a device module, in which the driver module is the platform driver and the device module is the device information of the platform. When the two modules are loaded successfully, they will match successfully, and then the probe function in the platform driver module will execute. The probe function is the traditional character device driver.
54.4.1 platform device and driver programming
Create a new folder named "17_platform", and then_ Create a vscode project in the platform folder, and the workspace is named "platform". Create two files named leddevice.c and leddriver.c, which are respectively the platform device file of LED lamp and the platform driver file of LED lamp. Enter the following in leddevice.c:

54.4.2 preparation of test APP
The content of the test APP is very simple, that is, turn on and off the LED light, create a new ledApp.c file, and then enter the following contents in it:

make -j32
After the compilation is successful, a driver module file named "leddevice.ko leddriver.ko" will be generated.
2. Compile test APP
Enter the following command to compile the test program ledApp.c:
arm-linux-gnueabihf-gcc ledApp.c -o ledApp
After the compilation is successful, the ledApp application will be generated.
54.4.2 operation test
Copy the leddevice.ko, leddriver.ko and ledApp files compiled in the previous section to the rootfs/lib/modules/4.1.15 directory, restart the development board, enter the directory lib/modules/4.1.15, and enter the following commands to load the leddevice.ko device module and leddriver.ko drive module.
depmod / / this command needs to be run when the driver is loaded for the first time
modprobe leddevice.ko / / load the device module
modprobe leddriver.ko / / load the driver module
The devices and drivers under the current board platform bus are saved in the / sys/bus/platform / directory of the root file system, where the devices subdirectory is the platform device and the drivers subdirectory is the platofm driver. Check the / sys/bus/platform/devices / directory to see if our device exists. In leddevice.c, we set the name field of leddevice(platform_device type) to "imx6ul led", that is, the device name is imx6ul led. Therefore, there must be a file named "imx6ul led" in the / sys/bus/platform/devices / directory, Otherwise, it means that our device module failed to load, and the result is shown in figure 54.4.2.1: