ViT's original paper is An Image Is Worth 16x16 Words: Transformers For Image Recognition At Scale . First, let's take a look at the effect of the ViT model. The highest accuracy of 88.55 can be achieved on ImageNet 1k. The key is that we have conducted pre training on our own data set, with a volume of 300 million data.

The original architecture is shown as follows. First, the input image is divided into many patches, 16 in the paper. Input the patch into the Embedding layer of Linear Projection of Flattened Patches, and you will get vectors, usually called tokens. Next, a new token is added in front of a series of tokens (the category token is a bit like the START input to the Transformer Decoder, which corresponds to the * position). In addition, the location information needs to be added, corresponding to 0 ~ 9. Then input it into Transformer Encoder, and stack the block s L times corresponding to the figure on the right. Transformer Encoder has as many outputs as there are inputs. Finally, only classification is performed, so the output corresponding to the class position is input into MLP Head for prediction and classification output. 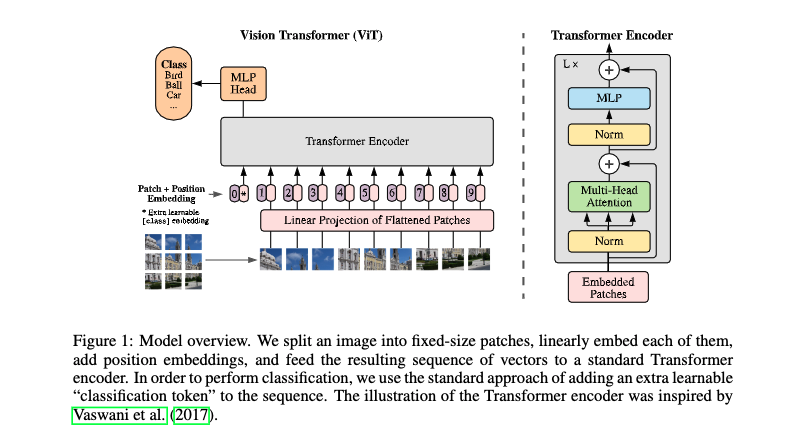 In this paper, we give such a graph, and the cosine similarity between the position codes we train and other position codes. The size of the patches here is 32 × 32 32 \times 32 thirty-two × 32, 224 / 32 = 7 224/32=7 224 / 32 = 7, so the size here is 7 × 7 7 \times 7 seven × 7. How do you understand this picture? We will superimpose a location code on each token. Of the 49 small graphs in the middle, each small graph is actually the same 7 × 7 7 \times 7 seven × 7. The position code of the first patch on the first line in the upper left corner is the same as its own position code, so the cosine similarity is 1, so the upper left corner is yellow. Then it is calculated with other location codes. You get the small picture in the upper left corner. Others are similar laws. Note that this is learned.

Transformer Encoder is to stack encoder blocks L times repeatedly. Let's look at a single Encoder Block. First, input a normal layer, where normal refers to the Layer Normalization layer (some papers have compared why BN is not good in the transformer, not as good as ln ｜ here, normal and then Multihead Attention are also studied in some papers. The original transformer first Attention and then normal. In addition, this normal before operation is the same as DenseNet's BN before Conv). After LN, it passes through multi head Attention, and then the source code passes through the Dropout layer. Some reappearance gods use the DropPath method. According to previous experience, it may be better to use the latter. Then, the residual can pass through LN, MLP Block, Dropout/DropPath.

When training ImageNet21K, it is composed of Linear + tanh activation function + Linear. However, after migrating to ImageNet1k or during migration learning, only one Linear is enough. (a softmax is required to obtain the category probability)

Let's comb the structure of ViT B/16 from the beginning, assuming that the input diagram is 224 × 224 × 3 224 \times 224 \times 3 two hundred and twenty-four × two hundred and twenty-four × 3. First pass through a convolution layer, and then flatten in the height and width directions. Then concat a class token, plus the addition operation of Position Embedding, where Position Embedding is also a trainable parameter. After Dropout, enter 12 stacked Encoder blocks. The output of Encoder through LN is 197 × 768 197 \times 768 one hundred and ninety-seven × 768, which is unchanged. Then we extract the output corresponding to the first class token. After slicing, it becomes 1 × 768 1 \times 768 one × 768, enter it into MLP Head. During the pre training of ImageNet21K, pre Logits is a full connection layer and tanh activation function. If you are training on ImageNet1k or your own data set, you can not use this pre Logits. 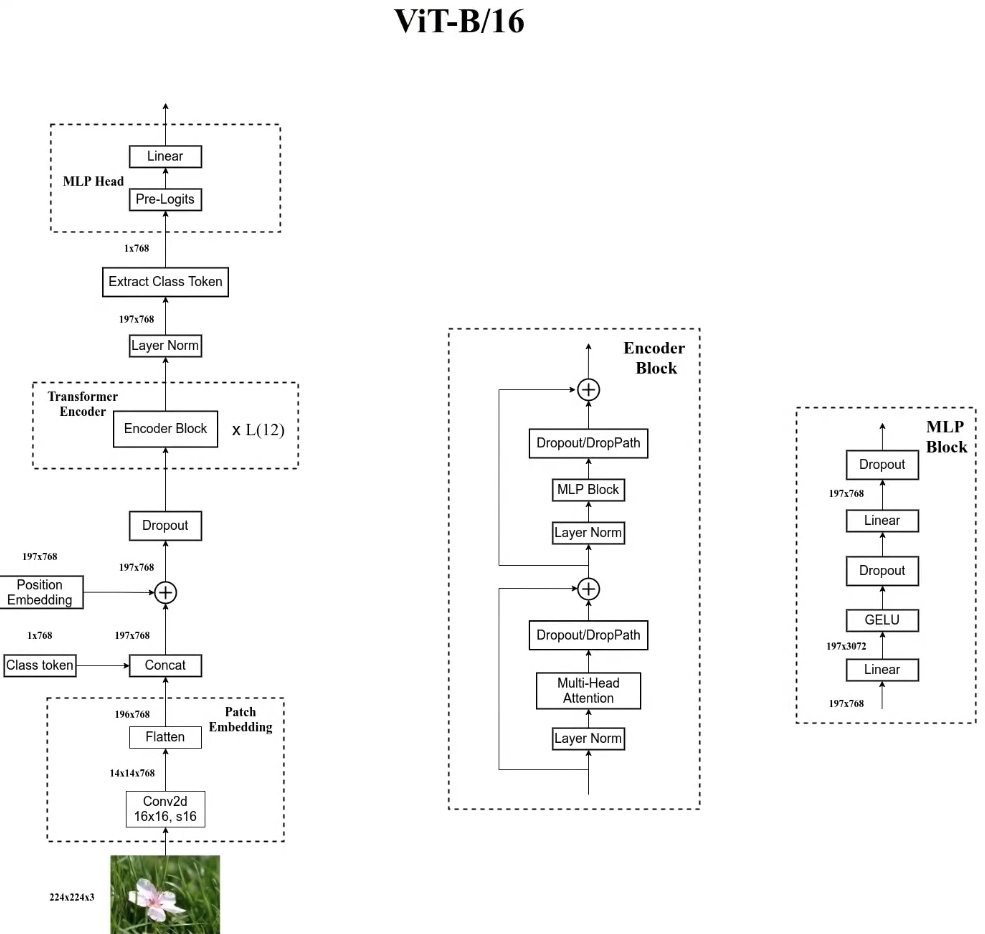 Let's take a look at the hybrid model of CNN and Transformer. Firstly, the traditional neural network backbone is used to extract features, and then the final results are obtained through ViT model. The feature extraction part here adopts ResNet59 network, but it is different from the original one. The first point is to use stdConv2d, the second point is to use GN instead of BN, and the third point is to move the three block s in stage4 to stage3. The output of R50 backbone is 14 × 14 × 1024 14 \times 14 \times 1024 fourteen × fourteen × 1024, and then through 1 × 1 1 \times 1 one × 1 convolution becomes 14 × 14 × 768 14 \times 14 \times 768 fourteen × fourteen × 768, and then flatten to get the token. Then it was the same as ViT.

The results show that the hybrid model is better than the pure transformer model, which is also the result of transfer learning. In a small amount of fine-tuning, the mixed model takes up a large proportion, but with the increase of the number of iterations, the pure transformer can also achieve the effect of the mixed model. For example, when there are 14 epoches, ViT-L/16 and Res50x1+ViT-L/16 are basically the same. 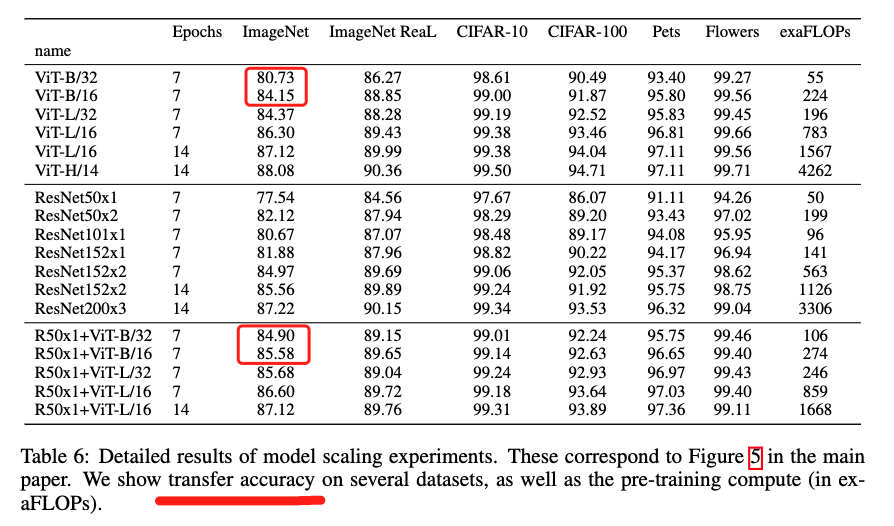 See the source of the code here.