We often encounter the following problems when using automapper: Suppose we use the UserDto class for the data we display to the user, and the User class is our entity class. When editing to the user, we may have fields that are Null in the database and need default values such as BirTime in UserDto here.Then some of us have the habit of assigning values in constructors

It looks like there's nothing wrong with the code here, but I want to use the default value in my UserDto class when BirTime is null, which is the current time, but after the actual operation you will find that the converted UserDto value has changed. So the problem is, how can I use the default value?

There are many methods, such as

The first method is to make a judgement after the conversion is complete and then reassign, in which case there is no need to write a constructor

The second method is not very good, when you need to convert many classes, each of them should be written like this, many will also be very annoying

Personally, I recommend the third method, but it's like killing with a stick. It has both advantages and disadvantages.

During the learning process, I read a lot of materials, and one of the blog posts that helped me a lot is:http://www.codeproject.com/Articles/61629/AutoMapper Full English is still stressful for me, but it's still a bit chewed.

The DTO and Model mentioned above, in general, are directly mapping the data in the database, and the Model is interactive data. How do you map the data in the two objects?

The DTO object here is automatically transformed into a Model object by AutoMapper, so the values of userName, age, and job in the modelData are the values taken out by the GetdtoDataFromDB() method.

When using AutoMapper to transform DTO and Model automatically in a real project, I encountered a pit, which is not really a pit, but a place I didn't notice. Make a record here to enhance my impression.
DTO and Model are structured as follows:

Having written these two objects, you begin to write as above and start auto-transforming with AutoMapper

When I finished, I was very happy and I was amazed at the power of AutoMapper.

In this way, the project will run successfully, and one of the benefits of AutoMapper is that if we need a new field, such as a new one in the DTO

If it's a regular writing style at this time, we need to add it manually where we're transforming it

As the project gets bigger and bigger, we need to be extremely careful about making this change.
Using AutoMapper to achieve automatic transformation, you only need to add new fields to the DTO and Model to avoid the risk of handwritten code.

AutoMapper also has many powerful functions, such as customizing mapping relationships;
If used in future learning, they will also be recorded as notes.

Differences between before and ForMember s and after in AutoMapper

I've prepared a test case here, and we're trying out some methods directly when we convert entities to DToS

However, it is inevitable that some field type changes will be needed. Here is the difference between before and ForMember s

Beforeuses the field values used to change entities before they convert dto, and assigns them to dto.

The id here is originally 1, but after assignment by before transform, the output to Du dto becomes 3;

When the string here is converted to an array object, a type error is reported, which is also the pit I encountered. Neither before nor after can be used at this time. 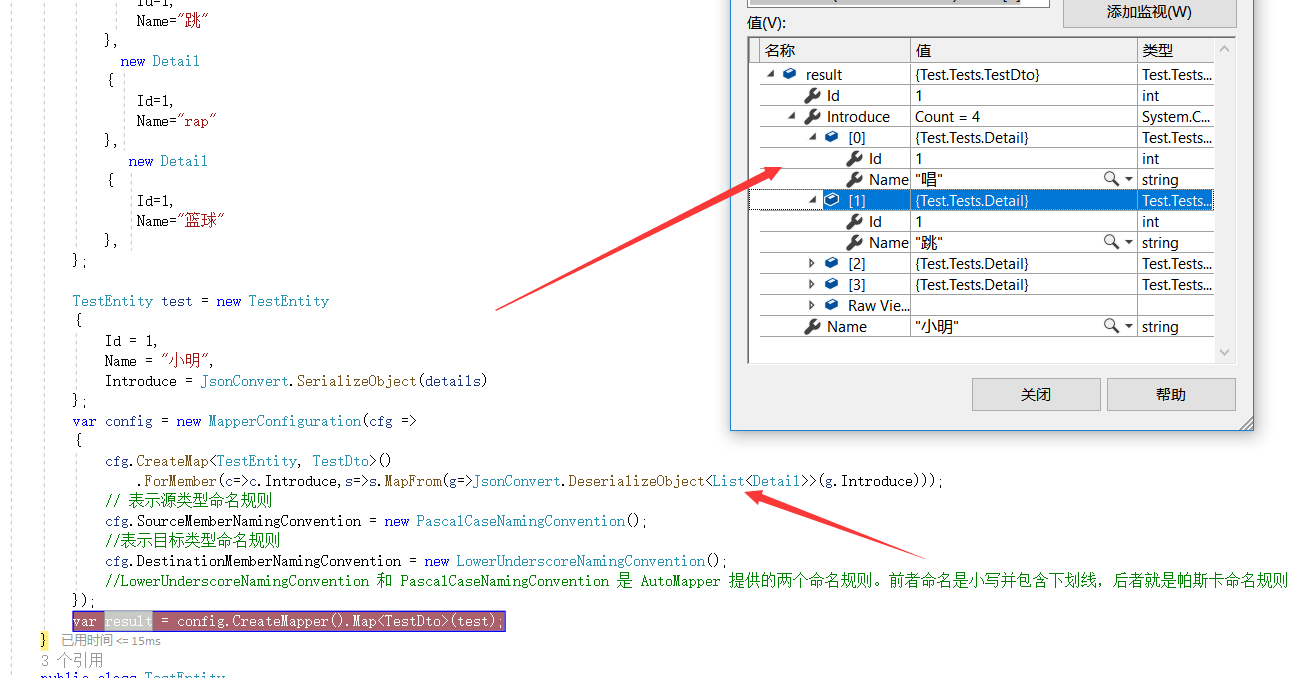