The biggest advantage of PyQt5 is that the interface can be made intuitively using qtdesigner, and then the code can be read directly, which saves the tedious steps of typesetting and so on, and the beauty of the interface is also beyond tk's reach.

First, you need to make a ui interface with QTdesigner, and then read the interface through python code.

At this point, the form object has been created. Then, we need to use a function to create the object and display it. Then we need the following code:

If your program still has new windows, you can continue to write a form object in the same way, and then in your ShowUi.py We can create objects in, even in our MainUi.

Convert the UI file to a python file and make the same object call. The method is actually the same as the former. Here's how to convert the UI file:
The compiler I use is pycharm. There is an external tool in pycharm's toolbar class. You can fill the instructions into the external tool. In this way, you only need to drag the UI file into pacharm and run your tool to automatically generate python files, which can save the trouble of repeatedly typing instructions. The configuration is shown in the external tool of the toolbar. 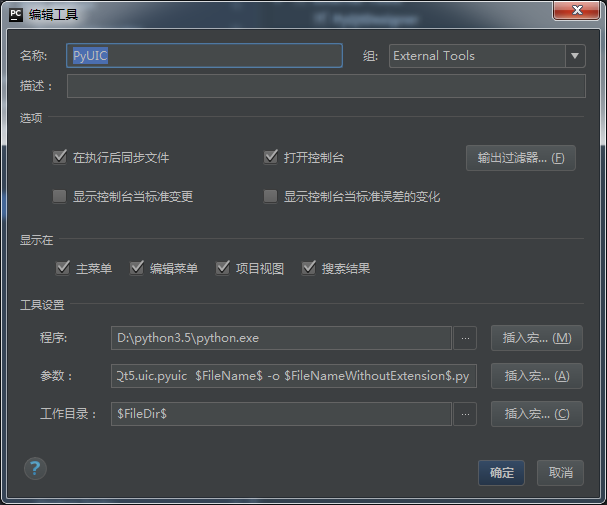 The configuration is as shown in the figure above. Name: user defined.
Write the program bar to the python.exe Documents. The parameter is: - M pyqt5 uic.pyuic  $FileName$ -o $FileNameWithoutExtension$.py
It is to generate a python file with the same name as the current operation file.
The working directory is $FileDir $, which means the directory where the current file is located

Of course, if you don't want to use this tool, you like to manually tap the command, then you can open your cmd, or terminal, and enter

You will generate a python file here, but the python file can't actually generate a window directly. You need to perform code visualization operations as follows:

Let's say I've generated a main_menu.py "The content of the python file is basically as follows: 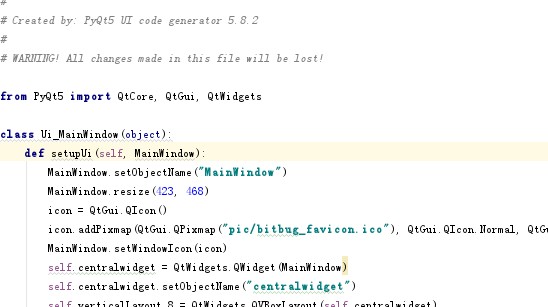 Here we can see that the python file creates a UI called_ The object of MainWindow, as you should have guessed, is exactly the interface we made. That is to say, our UI file is translated into a python object by a component of QT. What we need to do next is to reference this object in the python file as follows:

In this way, your python project can be used directly without the UI file. The advantage is that you don't need to match the UI file with the EXE file when packaging it. For Qt operation, I'm going to talk about a few common and typical ones here. If you need to go deep, you need to consult relevant manuals and documents. I'm basically qualified for this kind of tools, not my main business.

Button triggering uses the concept of slot and signal in QT, which we don't need to think of as complicated as it is. It just binds the event of button to a function. When the event is triggered, the function runs. The template code is as follows:

It also inherits from QAbstracButton Class, which provides a group of buttons and text labels for selection. The user can select one item, and the label user displays the corresponding text information. You can switch on or off, i.e. checked or unchecked. Multiple qradiobuttons are a button combination. If multiple exclusive buttons are combined, they need to be placed in the QGrouopBox or QButtonGroup. When switching on or off, they will send toggled Signal, bind this signal, when the button state changes, trigger the corresponding behavior;

Common methods are as follows:

The clicked signal will send this signal every time the button is clicked. Generally, only the state change is triggered, so the toggled signal is more suitable for the monitoring of this state;

The radio box is often used in practice. For example, when writing a software login interface, the radio box can be set to auto login, remember password, etc
The usage of radio box is as follows:

Then there is the Qt timer. This component is also very practical. It allows your interface to execute a function at a fixed time. The concept is basically the same as the interrupt of a single-chip microcomputer.
For example, when I display a time in the window, I need him to update the time information of the window every second. Then I need to set a window timer. The code is as follows:

In the same way, we can also bind other functions to timers to let them run regularly. The same is true.

Here's a tip on how to trigger an event without pressing a button when the options bar is selected. In fact, it is applied to the above timer. You can bind the timer to the option bar reading function. This function reads the value of the option bar every 200MS or 1s. In this way, the user can make a response as soon as he changes the option.

In fact, file operation is basically similar to TK, which is to call the window to read the file path and name selected by the user, and then the user calls the os function to perform file operation. First, open the file. The basic code is as follows:

Next, save the file:

As a component that can be input and output, table is also very practical when it is used as a tool. Its basic usage is as follows:

How can I add other components to a TableWidget?

The input box is mainly used to input human instructions or text in human-computer interaction. Its basic operation method is as follows:

The main functions of the menu bar are triggered by binding functions:

Tag addition: Here's the function of translate function. In fact, I'm not familiar with QT and I'm not going to learn more about it. So when I update the Label in the program, I copy the font type originally set in QTdesigner directly and write it into this function. Otherwise, you will find that the font format originally set is complete after you directly use setText function You can also use pyqt5's built-in Font modification function to modify it without using the translate function.

Threads are often used in pyqt programming, because some time-consuming operations, if not put into the thread, will cause the qt interface to refresh and jam, or even no response.
(I'd like to remind you that you can also use the thread module of python for multithreading, but because of gil lock, you can only use a single core. However, qthread is implemented in c + +, so it is recommended to use qthread to write multithreading (if conditions permit)

To add a callback function to a thread in qt:

First, create a UI file called MatplotMenu, add a QFrame component to the file, and then create a LineEdit and two buttons. The effect is shown in the following figure. Then, using the above method, generate PY file. 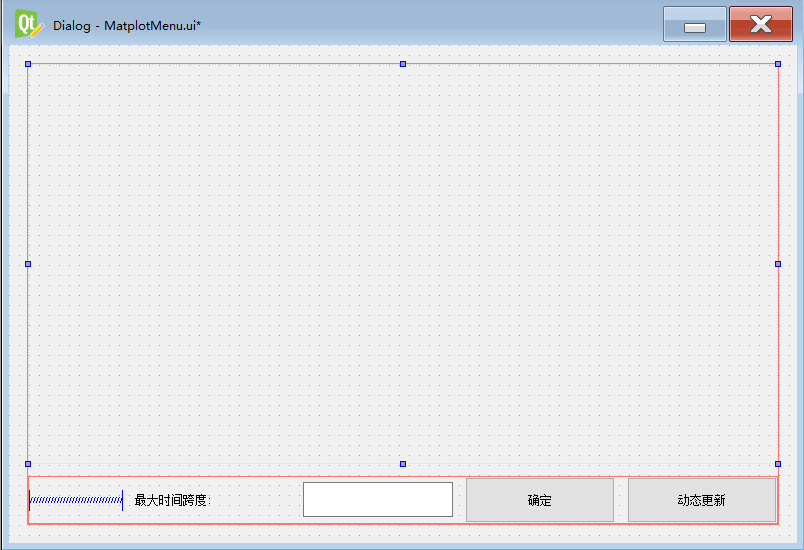 Next, create a file named MatplotObject.py Fill in the following code.