At the beginning of writing the third person control, we used WASD to control the role in the computer test
Later, it needed to be released to the mobile phone, so a rocker was added
The code of keyboard control role has been written. The role moves in eight directions

If I want to control the role according to the traditional idea of the rocker, it is very troublesome to rewrite the control role code, so I will determine the current direction of the rocker by calculating the rotation angle of the rocker
ok, now let's start typing
First, let's debug and observe the return values of x-axis and y-axis of the rocker
//Moving the rocker 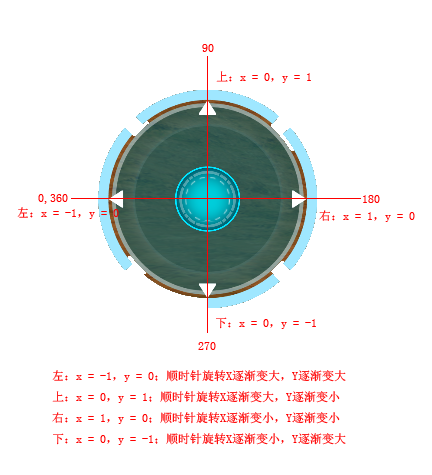 ok, now that we know how many degrees the current rocker has rotated, we can easily use the angle to determine the current direction of movement

It's a success. Let's run on the mobile phone. This is the eight direction operation effect of the rocker I want