This article is the last one in AQS series. In the first one, we analyzed the core of AQS through ReentrantLock fair lock. In the second one, we explained the Condition and the use of thread interruption.

This article, our focus is the last part of AQS, the use of AQS sharing mode. With the foreshadowing of the first two articles, the remaining source code analysis will be much simpler.

This article first uses CountDownLatch to clarify the sharing mode, and then follows the source code of other AQS related classes, CyclicBarrier and Semaphore.

Relatively speaking, if the reader has the basis of the previous two articles, this article is much simpler, but for beginners, one hour is also inevitable. 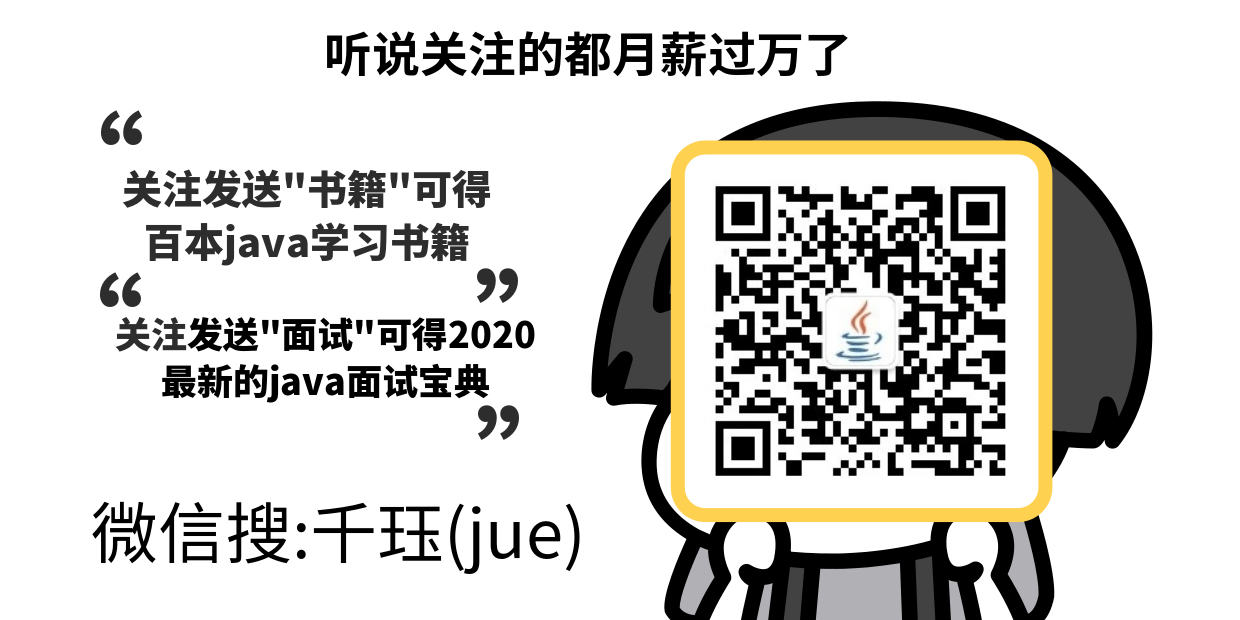 CountDownLatch is a typical use of AQS sharing mode, which is a high-frequency use class. The Chinese meaning of latch is gate bolt and fence. I will not talk nonsense about how to explain it. Let's see two examples to know where and how to use it.

Let's take a look at the example given by Doug Lea in the java doc. This example is very practical. I often write this code.

Suppose we have N (N > 0) tasks, then we will use N to initialize a CountDownLatch, and then pass the reference of the latch to each thread. After each thread finishes the task, calling latch.countDown() means that a task has been completed.

The thread of the method calling latch.await() will block until all tasks are completed.

So CountDownLatch is very practical. We often split a relatively large task, and then start multiple threads to execute it. After all threads are finished, we can perform other operations. In this example, only the main thread calls the await method.

Let's take another example. This example is very typical. Two CountDownLatch are used:

In this example, doneSignal is used with the first example. Let's talk about startSignal here. N newly opened threads call startSignal.await() to block and wait. They block on the fence. Only when the conditions are met (startSignal.countDown()), they can pass the fence at the same time. The purpose is to make all threads stand on the same starting line.

If there is only one thread calling the await method to wait for the task to be completed, CountDownLatch will be much simpler. Therefore, readers of the source code analysis must build a scenario in their mind: there are m threads that do tasks, and N threads waiting on a fence for the M threads to finish tasks. Until all m tasks are completed, n threads are the same Through the fence.

Talk is cheap, show me the code.

To construct a method, you need to pass in an integer no less than 0:

The code is a routine. First analyze the routine: the state in AQS is an integer value, which is set by an int count parameter. All waiting threads that call the await method will hang, and then some other threads will do the operation of state = state - 1. When the state is reduced to 0, the thread that reduces the state to 0 will be responsible for calling Wake up all threads that call the await method. It's all routines. It's just that Doug Lea's routines are deep and the code is clever. Otherwise, we don't need to analyze the source code.

For CountDownLatch, we only need to care about two methods, one is the countDown() method, and the other is the await() method.

The countDown() method decrements the state by 1 every time it is called, until the value of state is 0; and await is a blocking method, when the state is decremented to 0, the await method will return. Await can be called by multiple threads. At this time, the reader should have a graph in his mind: all threads calling the await method are blocked in the blocking queue of AQS, waiting conditions are met (state == 0), and the threads are awakened from the queue one by one.

After about 10 seconds, the above program will output:

The order of these two outputs is not absolute

In the following analysis, we assume that t3 enters the blocking queue first

Next, we follow the process step by step: wait for await, then wake it up, and the await method returns.

First, let's look at the await() method, which represents a thread blocking, waiting for the value of state to be reduced to 0.

Let's analyze this method carefully. After thread t3 enters the team through the first step of addWaiter, we should be able to get this:

Since the tryAcquireShared method returns - 1, the if (r > = 0) branch will not go in. At shouldParkAfterFailedAcquire, t3 sets the waitStatus value of head to - 1, as follows:

Then when you go to parkAndCheckInterrupt, t3 hangs.

Next, let's look at the wake-up process. To make the following diagram richer, let's assume that CountDownLatch is initialized with 10. 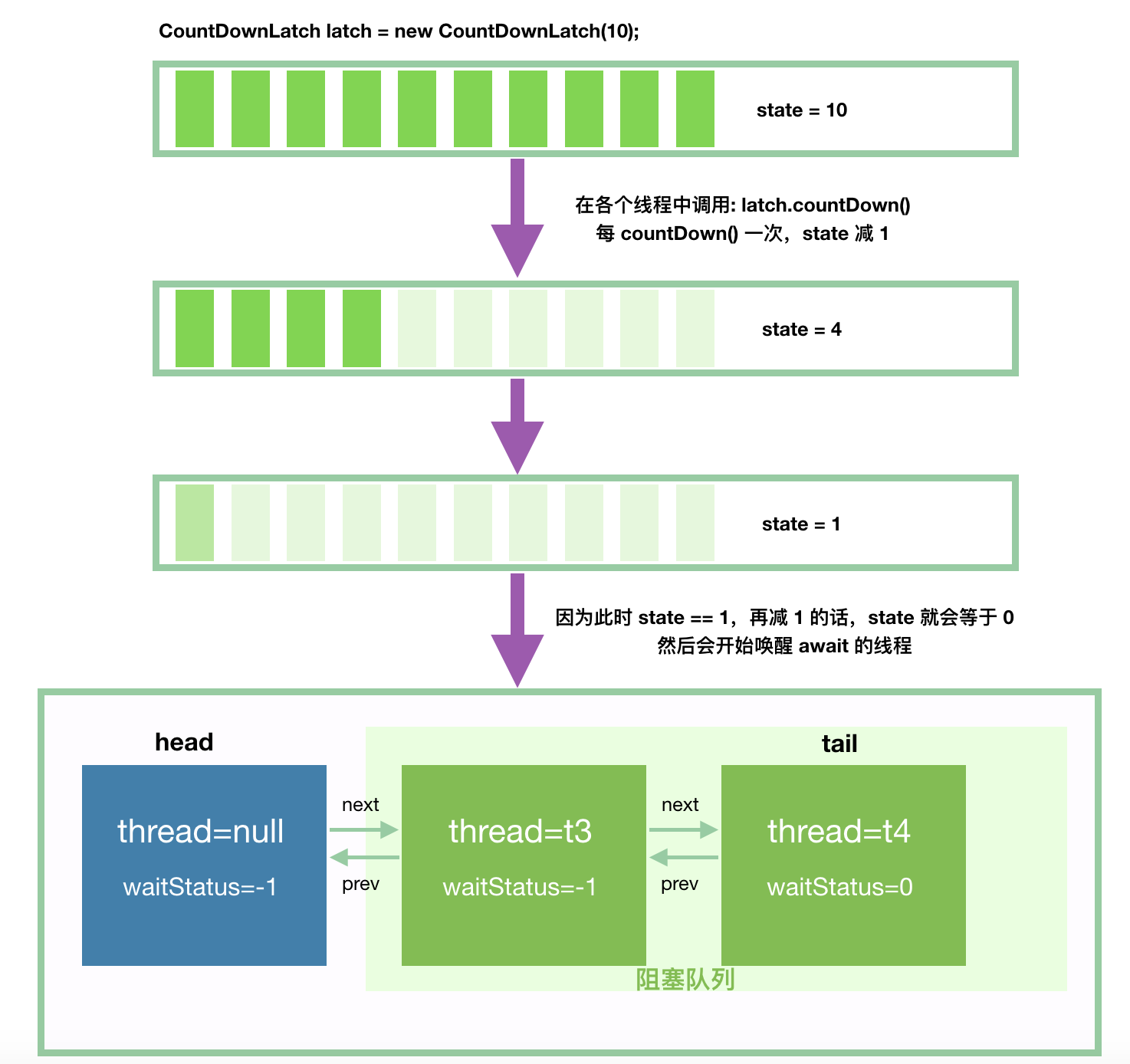 Of course, in our example, there are no 10 threads, only 2 threads t1 and t2, just to make the figure better.

The countDown method subtracts the state value by 1 every time it is called. If the state value is reduced to 0, the following methods are called to wake up the threads in the blocking queue:

Once t3 is waked up, we continue to return to the code of await, parkAndCheckInterrupt. We do not consider the interruption first:

Next, t3 will enter the setHeadAndPropagate(node, r) method, first occupy the head, and then wake up other threads in the queue:

Back to this method, let's analyze the doReleaseShared method. According to the process, the head node is t3 at this time:

We will analyze the next if statement before we can explain why the first CAS may fail:

If the above scenario 2 is satisfied, then we can know why the above CAS operation compareAndSetWaitStatus(h, Node.SIGNAL, 0) fails?

Because when the current for loop thread arrives here, the thread t4 that just woke up may just be better, so CAS may fail.

During the first round of for loop, t4 will wake up, and t4 will set itself as the head node after waking up. If the for loop runs to if (h == head) after t4 sets the head node, then false will be returned, and for loop will enter the next round. After t4 wakes up, it will also enter this method. Then the second round of for loop and t4 may meet in this CAS, and only one success will be achieved.

It literally means "reusable fence" or "periodic fence". In a word, it's not useless after being used once. Compared with CountDownLatch, CyclicBarrier is much simpler. Its source code has no deep place. It's a combination of ReentrantLock and Condition. As shown in the following diagram, is CyclicBarrier similar to CountDownLatch, but CyclicBarrier can have more than one fence, because its fence can be reused.

Because the source code of CyclicBarrier is relatively simple. As long as readers are familiar with the previous analysis of Condition, there is no pressure on the source code here, just a few special concepts.

First, use a diagram to describe some concepts in the CyclicBarrier and its basic use process: 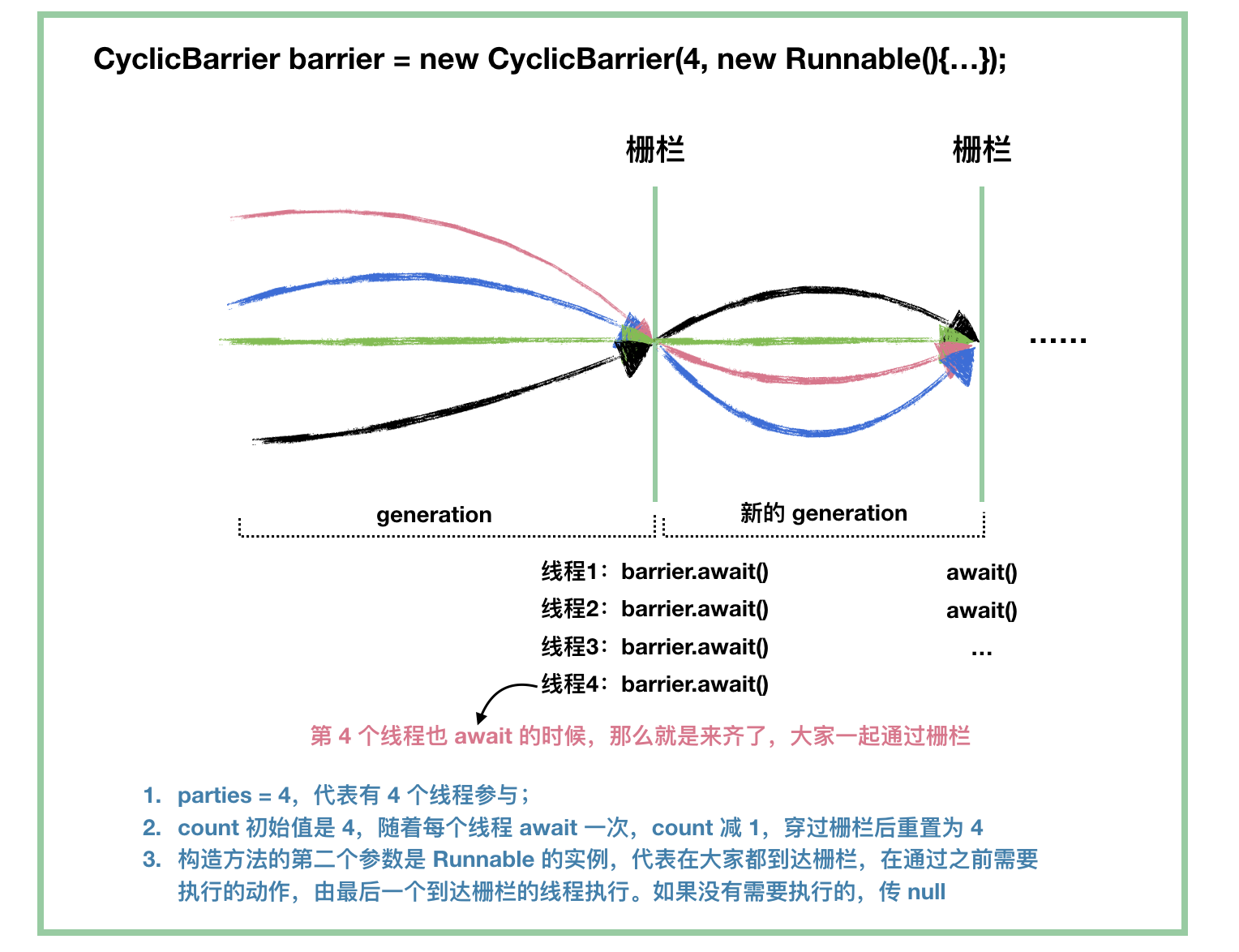 As you can see from the figure, the most important source code of CyclicBarrier is the await() method.

Let's finish the figure first, and then we start source code analysis:

First, how to start a new generation:

See how to break a fence:

These two methods are used later. Now we start to analyze the most important wait through fence method await method:

Well, I think I should make it clear. I don't seem to have missed a single line of code, do I?

First of all, let's see how to get the number of threads on the fence and wait:

It's very simple to judge whether a fence has been broken. Just look at the broken value:

When we talked about await, we almost made it clear when the fence would be broken. The summary is as follows:

Finally, let's see how to reset a fence:

Let's imagine that when initializing, if the thread parties = 4 is specified, and three threads call await to wait, and before the fourth thread calls await, we call reset method, what happens?

First of all, breaking the fence means that all waiting threads (three waiting threads) will wake up, and the await method will return by throwing a BrokenBarrierException exception. Then start a new generation, reset count and generation, and it's zero.

Well, the source code of CyclicBarrier is very simple.

With the foundation of CountDownLatch, it's much easier to analyze Semaphore. What is Semaphore? It is similar to a resource pool (readers can compare it with thread pool). Each thread needs to call the acquire() method to get the resource, and then it can be executed. After execution, it needs to release the resource to other threads.

As you can probably guess, Semaphore is also the use of shared locks in AQS, because each thread shares a pool.

Routine interpretation: when creating a Semaphore instance, you need a parameter, limits, which is basically set to the state of AQS. Then when each thread calls acquire, it executes state = state - 1, and when it releases, it executes state = state + 1. Of course, if state = 0 when it acquires, it means there are no resources, and you need to wait for other lines release.

These methods are also old-fashioned. You basically understand them. There are two more acquire methods that can pass parameters here. But you also understand them. If we need to obtain more than one resource at a time, we will use them.

Let's take a look at acquirenterruptibly() method that does not throw InterruptedException exception:

It's also an old pattern, so from the source code analysis point of view, we don't really need to care about whether it's a fair strategy or an unfair strategy. The difference between them is usually one or two lines.

Let's go back to acquiresshared,

When tryAcquireShared(arg) returns less than 0, it means that the state is already less than 0 (no resources). At this time, acquire can't get the resources immediately and needs to enter the blocking queue to wait. Although there are many codes posted, it doesn't care much more:

I will not introduce this method. After the thread is suspended, wait for a resource to be released. Next, we will look at the release method:

The tryreleased method always returns true, and then doReleaseShared. This is also a familiar method. I'll post the code instead of analyzing it. This method is used to wake up all waiting threads:

At last, I have finished AbstractQueuedSynchronizer. For Java concurrency, Doug Lea is really a god like existence. In the future, we will come into contact with a lot of Doug Lea code. I hope that all of us can continue to polish our technology in the direction of the great God, with less high architecture and more real excellent code.

(end of the paper)