Preface
RabbitMQ is a message queue that is used to asynchronize and decouple applications, as well as to buffer and distribute messages.The most important role of message middleware is decoupling. The most standard use of middleware is that producers produce messages to queues, consumers take interest out of queues and process them. Producers do not care who is consuming, consumers do not care who is producing messages, so as to achieve decoupling purpose.In distributed systems, message queuing is also used in many other areas, such as support for distributed transactions, RPC calls, and so on.

1. A brief overview of the important role of RabbitMQ

Compare the benefits of using message queues for asynchronization:

As for decoupling, you can only rely on your own understanding of coupling, which is outlined in the form of text:

The above message queue implements asynchronous scenario analysis: the main thread still processes low-time inbound operations, and then writes the messages that need to be processed into the message queue, which takes a negligible amount of time and is very fast. Then, an independent e-mail subsystem and an independent e-mail subsystem subscribe to the message queue for separate processing.After processing, send ACK confirmation to the queue, and delete the entire data of the message queue.This process is also the way that companies are now using SOA to service each system, giving time-consuming operations to separate business systems, using message queuing as the middleware, to achieve the purpose of application decoupling, and consuming very low resources, a single server can withstand larger concurrent requests.

Here, after a period of persistent text edification, it is estimated that you have been blurred. All of you are talented people who can read with blurred faces, and your aunt can't help shouting 666 to you.

First, RabbitMQ is a kind of message middleware, such as ActiveMQ, RocketMQ.... Generally speaking, these message middleware refer to the basic software that completes sending and receiving messages in distributed systems.

Overall, the workflow for RabitMQ is as follows:

The specific switches are described below.

The common sense for a switch is:

As mentioned above, there are four types of switches: Direct, topic, headers, Fanout, which is also an important point. Here is a brief overview of these four types:

topic forwards information mainly by wildcards, while queues and switches bind mainly by a pattern (wildcards + strings), and when sending a message, the message is sent to the message queue only if the specified Key matches the pattern.For example, *.news or #.news, where # represents 0 to more than one random character.

Fanout is a form of routing broadcast that sends messages to all queues bound to it and is ignored even if a key is set.

Simply put, the key concepts of RabbitMQ are as follows:

1. Producer: Procedure for sending messages
2. Consumers: the procedure for listening for receiving consumer messages
3. Message: A sequence of binary data streams
4. Queue: Staging/Storage of Messages
5. Switch: A transponder for messages, used to receive and distribute messages.There are four types of fanout, direct, topic, headers
6. Routing\Key: Equivalent to a key/third party, bind to a switch to route messages to a specified queue!

With these concepts in mind, you can learn more about the evolution of the messaging model. Of course, this process is also known on the RabbitMQ website, RabbitMQ website: https://www.rabbitmq.com/getstarted.html

The following is a transcript from https://blog.csdn.net/u013871100/article/details/82982235. In the meantime, I recommend you check out this article, which is really good. 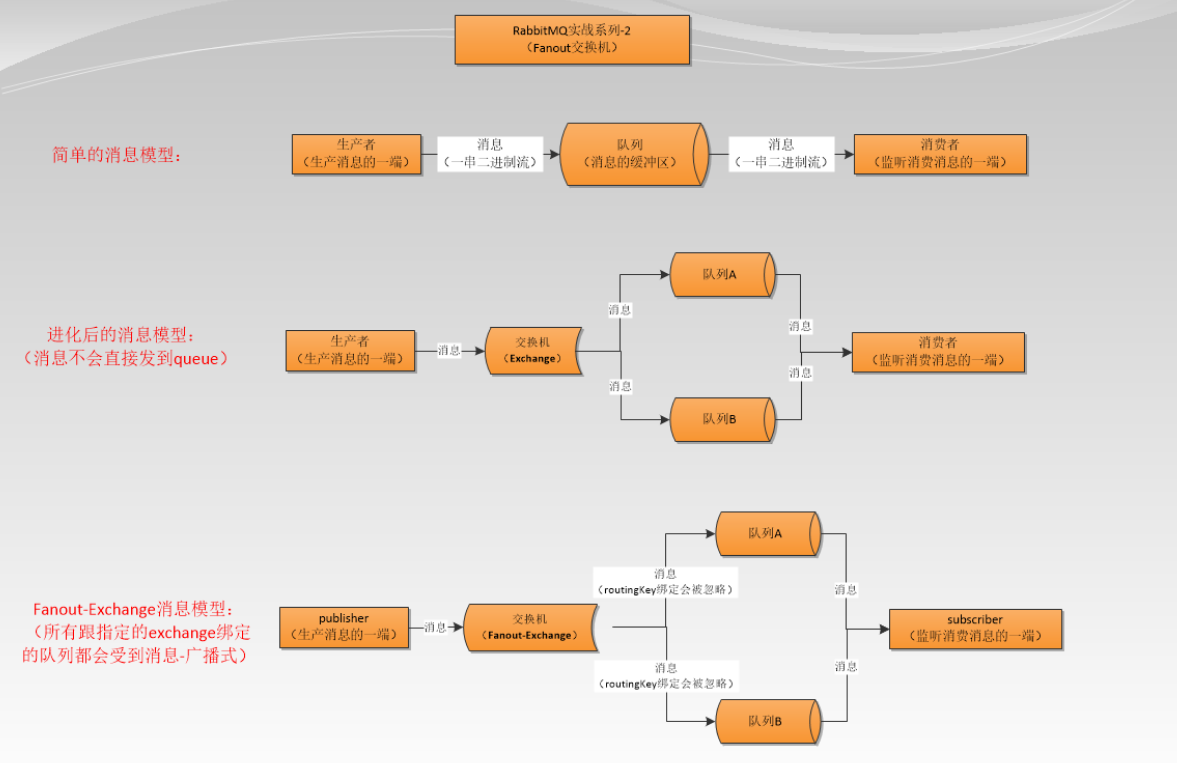 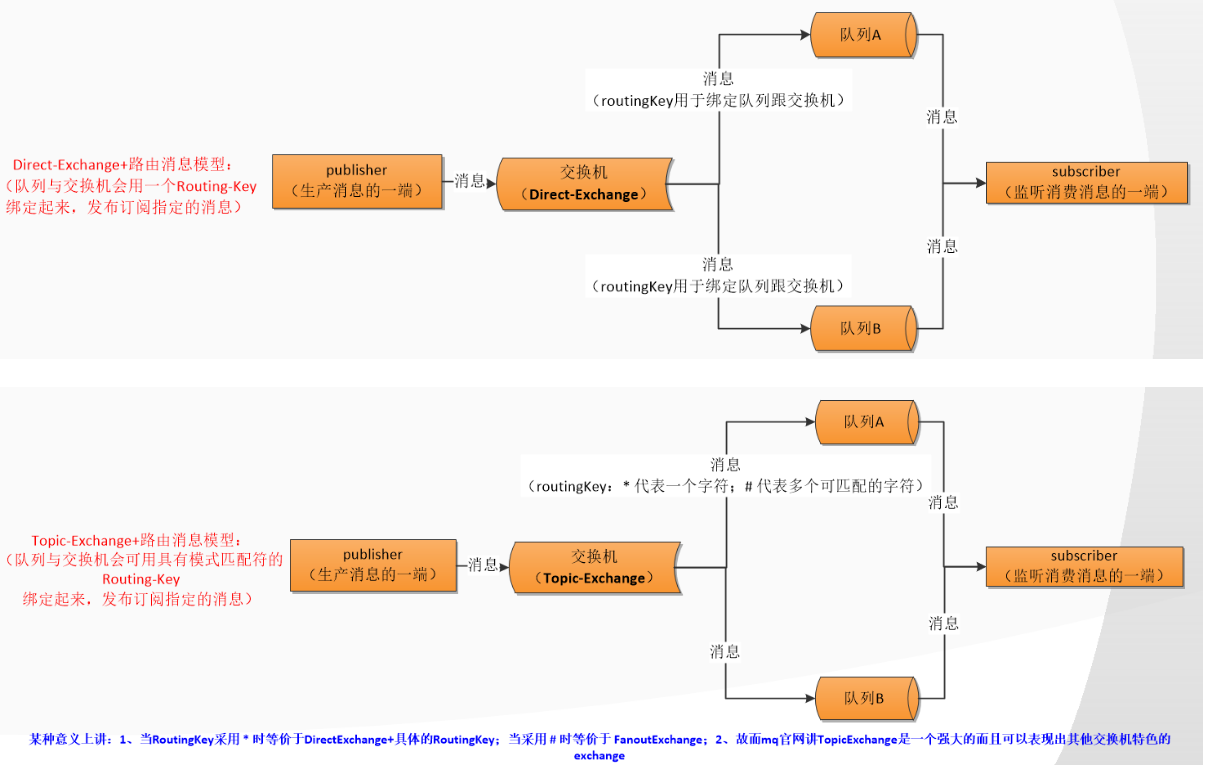 Okay, here's RabbitMQ's overview, so let's move on to the code integration phase.

1. The first thing you'll notice is the ConnectionFactory, which automatically configures the connection factory
So what has this project done?Go in and see its source code 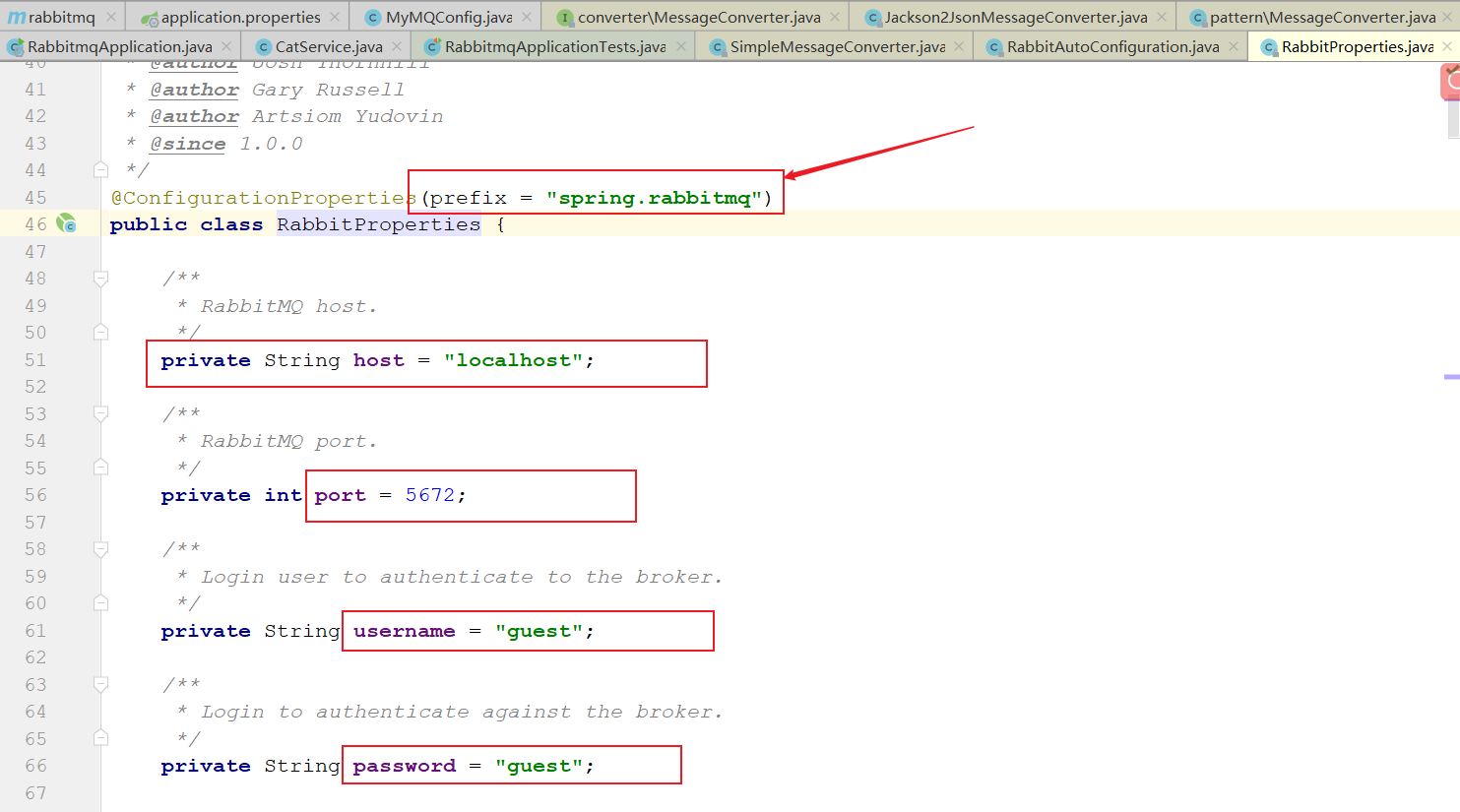 Look at its RabbitTemplate key source:

You know that RabbitTemplate mainly provides RabbitMQ's ability to send and receive messages;

Point into the AmqpAdmin interface to see its specific key code:

AmqpAdmin was found to be used to create and delete Queue s, Exchange, Binding, and so on, to manage components.

Almost, the code in the factory is analyzed here.

Before we can integrate RabbitMQ, we need to install RabbitMQ and its back-end console application and configure RabbitMQ parameters and related Bean components in the project.I'm sure you've all installed it, or read a hammer integration article...

After the RabbitMQ installation is complete, open the back-end console application: http://192.168.42.142:15672 Enter the account guest password guest and log in. The installation is successful when you see the following image

Once you're ready, you can integrate the test results. 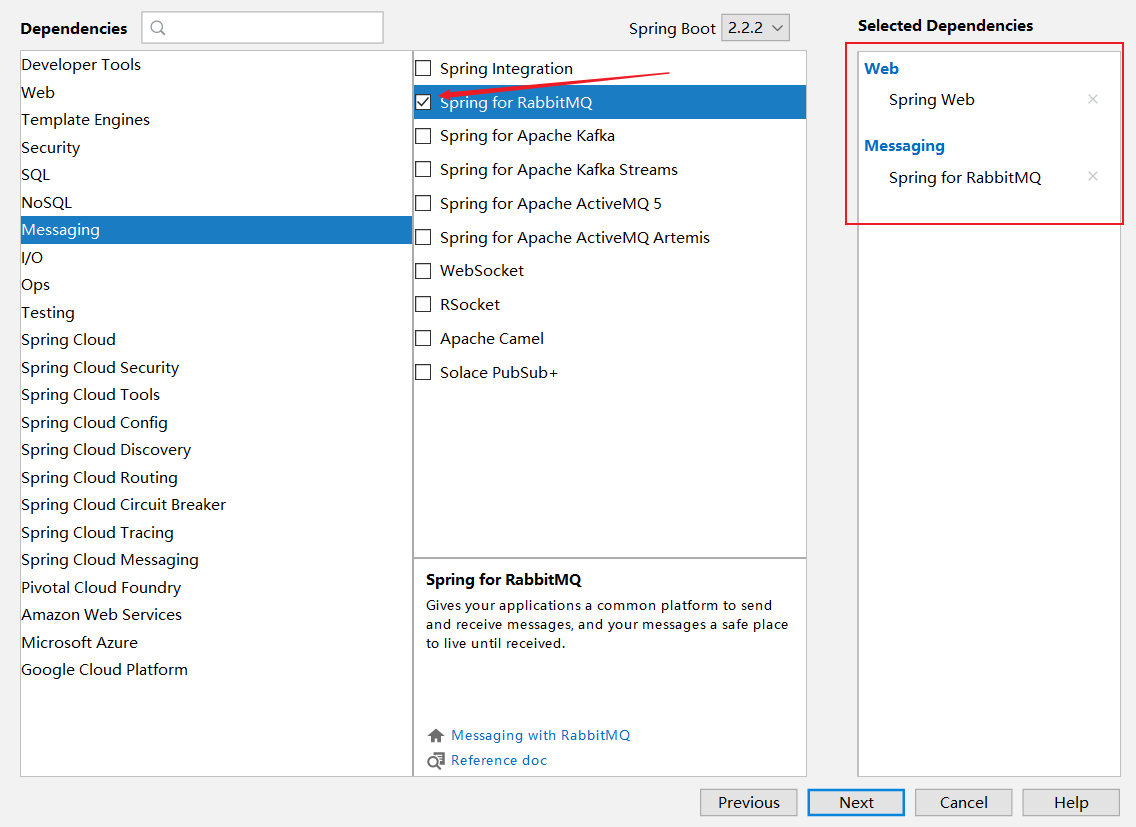 Then the dependencies of pom.xml are as follows:

Then the configuration application.properties at the project profile level

This is just a test integration of RabbitMQ, and the above configuration is temporarily sufficient.

Before you write your code, one thing to know is that springboot provides a jdbcTemplate-like template, RabbitTemplate, that understands the same thing, so you can use its powerful RabbitTemplate functionality.

The open information is found as follows:

First, to customize the message conversion rules, we need to change the default rules. First, open the MessageConverter interface. If it is a shortcut key for eclipse switching, you can directly F4 to see its relationship class that implements inheritance, as shown below.

Yes, the analysis found that there were indeed json's translation rules, so it started writing code.First, write a MyMQConfig class, which is implemented as follows:

After writing, run the sent message again as follows:

3.6. Use of AmqpAdmin management components

The switches, queues, and binding information we previously integrated were added manually by ourselves. In fact, AmqpAdmin, which exists in the ConnectionFactory factory in Rabbit AutoConfiguration in Springboot, can create and delete Queue s, Exchange, Binding, and so on, to manage components.

Analyzing the code above, first about Exchange, so first full-text search of Exchange is an interface, as follows

Next, since Exchange was created, the name of the created switch must be written. In the parameter DirectExchange passed in, the mouse clicks in and discovers

At this point, the analysis is almost complete. You can see that the easiest way to create Exchange above is to create an Exchange called Switch Name and run the test. The result is as follows:

Next, create a Queue as well 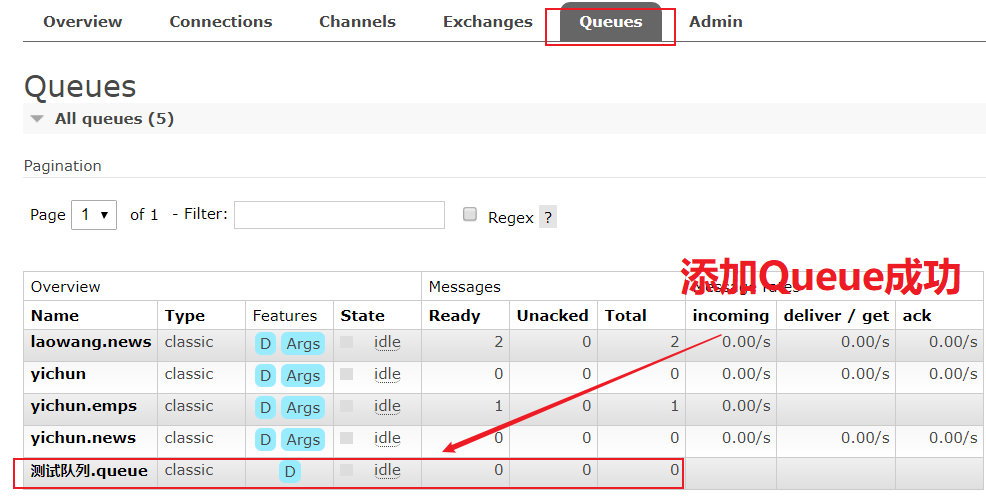 In our actual development, there is often a need to change the inventory after placing an order through a message queue, that is, to trigger a monitoring mechanism.

Of course, this listening implementation is also simple, simply add the @RabbitListener annotation to the message business code you need to listen to, and then add the @EnableRabbit annotation to the main Application Method to turn on the annotation-based rabbit mode.The sample code is as follows:

Listen mode 1: Serialize the object directly to print the result:

If this article helps you a little, please give a compliment, thank you~

Finally, if there are any deficiencies or inaccuracies, you are welcome to correct the criticism and appreciate it!If in doubt, please leave a message and reply immediately!

Welcome to my Public Number, which contains some java learning materials and a large wave of Java e-books, such as Professor Zhou Zhiming's in-depth Java virtual machine, Java programming ideas, core technology volume, big story design mode, Java Concurrent Programming practice.....are all the Bibles of java, let's not say get on the Tomcat car, let's go!The most important thing is to explore technology together, yearn for technology, and pursue technology. Well, if you come, you'll be friends.