**Bullshit: * * Hello, everyone. Welcome to this article. I'm a beginner of java. Ready to find a job after February 7, 22, now take a 70 day sprint note. Overall notes from advanced java features to microservice architecture (which is my route). From today on, I want to be self disciplined (I hope you like it). Welcome to discuss and study together. I'm a beginner shivering

Silicon Valley, dark horse's notes can be asked for from me if you need them

What is an exception

When we write java code, exceptions often occur when running. This time the program will stop.

Of course, sometimes even if we report an error, we don't want the program to stop, but we can continue to execute.

In the Java language, abnormal conditions occurring during program execution are called "exceptions".

(syntax and logic errors during development are not exceptions)

The problems caused by logic generally do not affect the program interrupt, but the results are different from what we think.

Other general problems caused by programming errors or accidental external factors can be handled with targeted code.

That can handle exceptions 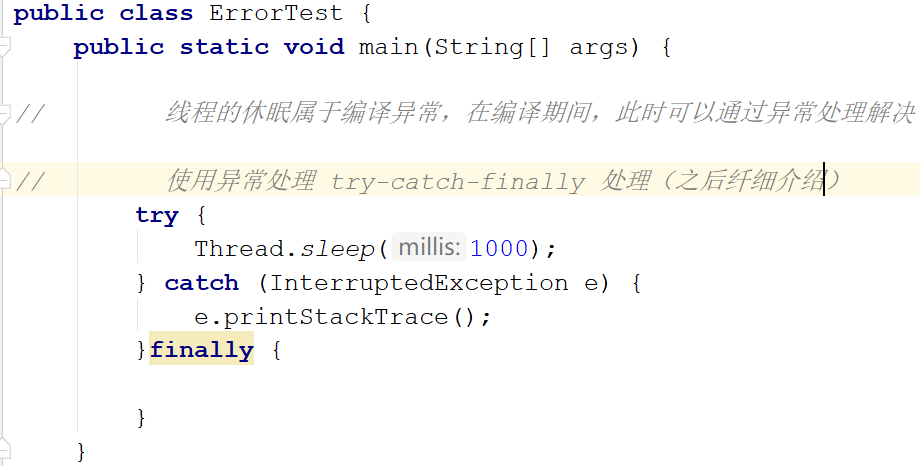 Some errors occur only at runtime.

Divisor is 0, array subscript is out of bounds, etc 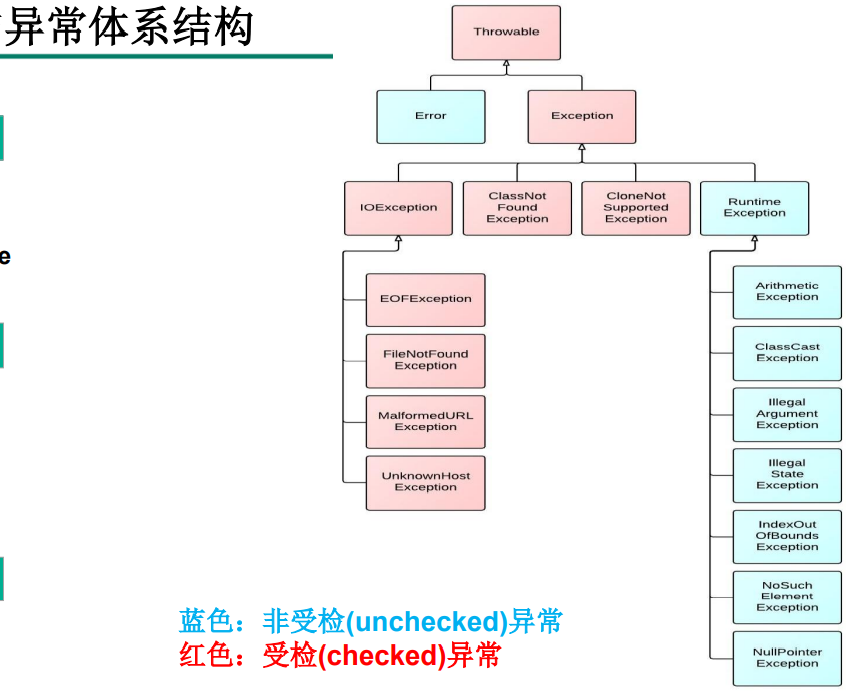 Throwable: the parent class of the exception. There are many divisions below

Error: the error belongs to JVM exception, which is hard to handle (I don't understand 55 here)

Exception: normal exceptions we often encounter. It is divided into checked exceptions and runtime exceptions 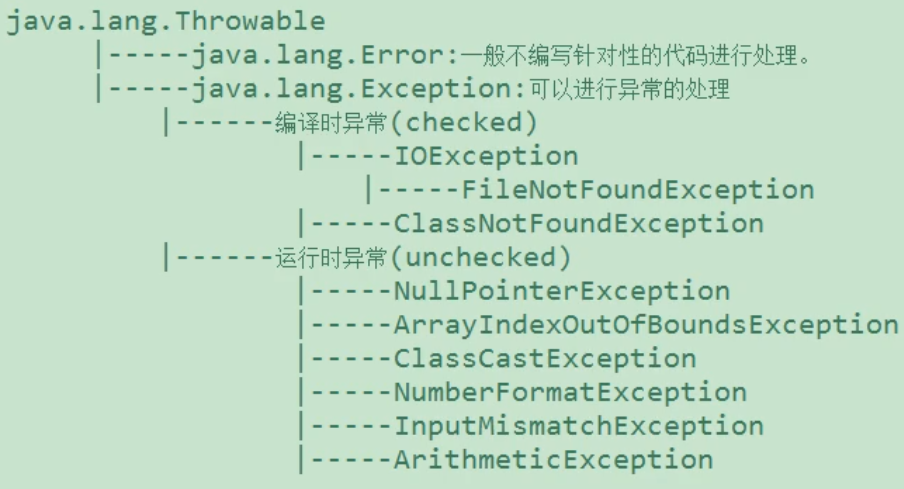 We generally use two methods for exceptions 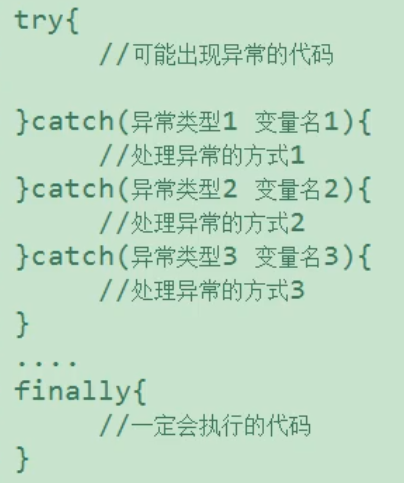 Analysis according to the results

First of all, we know that there must be exceptions in the code in try (we wrote it ourselves)

At this time, we write a print statement on it, because when an exception occurs in the try, the try will not continue to execute

The exception type matching of catch will be performed

Discovery: Although the above still reported an exception, the program did not terminate, but continued to execute

There are two common methods for exception classes

As we can see from the above code, there are also methods in the exception class of catch that can be called

finally: it is a module that will be executed in the end no matter what

No matter whether there is a return in: try or not, catch: another exception occurs or the return is performed. Finally, the module will execute

finally, the role of

We often need to close some resources during IO operation or JDBC operation. Avoid waste of resources

Therefore, we can use finally to close resources when there are exceptions in the program. Other operations

If a method (when the statement in is executed) may generate some kind of exception, but it is not sure how to handle this exception,

This method should explicitly declare that exceptions are thrown, indicating that the method will not handle these exceptions,

The caller of the method is responsible for processing.

Display through examples and read the content through the note number

The exception type thrown by the caller cannot be less than the exception of the calling method. (the checked prompt will appear)

Try catch, you can perform more operations and use it more abundantly

During execution, we create an exception ourselves. When running here, no exception handling will be carried out, and a checked exception or runtime exception will be reported

It depends on what type of exception is thrown manually

The user-defined exception needs to provide serialVersionUID for unique representation

Custom exceptions are thrown through throw.

The most important thing for custom exceptions is the name of the exception class. When an exception occurs, you can judge the exception type according to the name. 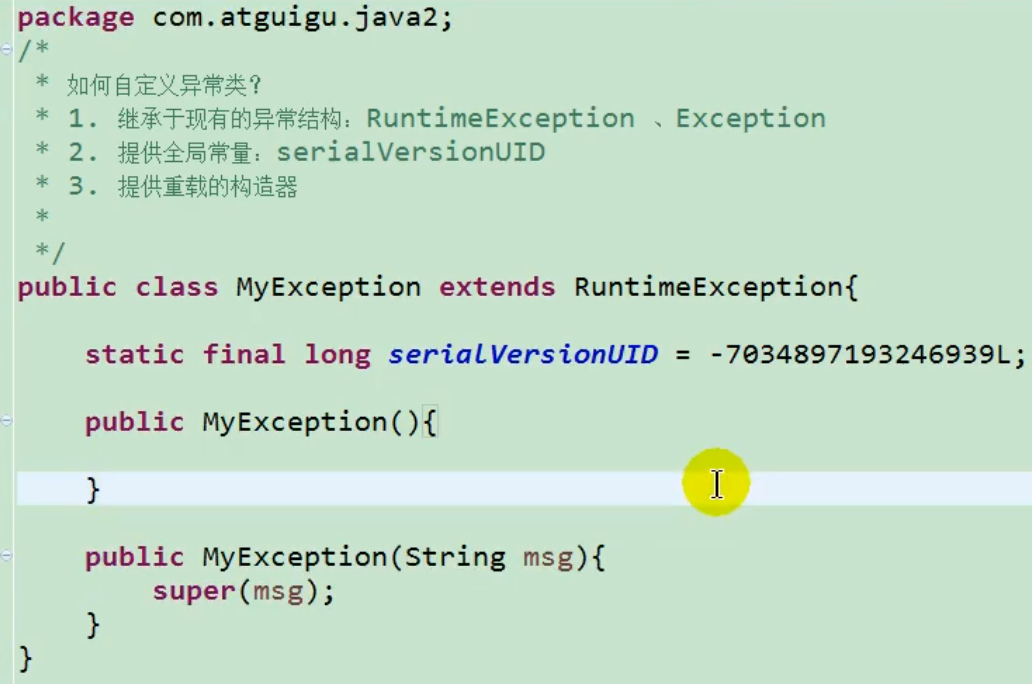